The effort to improve Peachtree Creek now includes a $25,000 grant from the Coca-Cola Co. that was used to install a rainwater harvesting system at Zonolite Park, in northeast Atlanta. 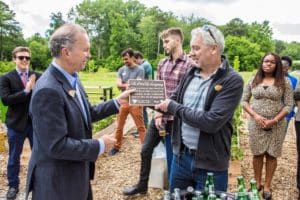 South Fork Conservancy board member and NewFields Chairman Billy Hall presents a plaque to John Radtke, director of Coca-Cola’s Water Sustainability Program. The plaque reads: ‘This rainwater harvester is a gift from The Coca-Cola Company to the watershed and all the life it supports.’ Credit: Eric Voss

“We’re so grateful to The Coca-Cola Co. for this gift, and can’t wait to keep working with them to preserve the creeks and waterways of our city,” said Sally Sears, a founding and current board member of the South Fork Conservancy.

The grant speaks to the momentum gathering around the volunteer-driven effort to restore the corridor along one of Atlanta’s historic waterways.

In August 2016, the Kendeda Fund pledged $500,000. South Fork Conservancy’s board Chairman Bob Kerr said at the time that the pledge established a solid base for future fund-raising activities. The goal is $2 million.

Incidentally, in addition to building trails along the waterway, the South Fork Conservancy aims to connect greenspaces including Medlock Park, Zonolite Park, the Clyde Shepherd Nature Preserve and the historic Olmsted Linear Park along Ponce de Leon Avenue, according to a page on the conservancy’s website.

The water system installed at Zonolite Park is to collect rainwater runoff from 9,200 square feet of rooftops on the adjacent Floatway business and office park that ‘s located near Emory University.

The retained water is to pass through an industrial-grade filter and be stored in a 3,470-gallon cistern. From there, the water is to be used to irrigate 6,000 square feet of greenspace in the park. The space includes an orchard, several raised planting beds and a community garden, according to a statement release by South Fork Conservancy.

The project also included the installation of a bioswale that will retain additional storm water run-off. In dry spells, the cistern will be filled with water drawn from Floataway Creek, meaning that the greenspace can be irrigated with no water that’s been treated for human consumption.

“This system is critical because storms in Atlanta often pound rooftops and rush off quickly, causing flooding and scouring creek banks, Sears said. “Now, this rainwater can work through the soil of the gardens and meadow and filter naturally and slowly into our creeks.”

The notion of an environmentally friendly project at Zonolite Park marks the swift and dramatic turnaround of a former manufacturing site that processed asbestos. Asbestos has been labeled a, “known human carcinogen” by the U.S. Department of Health and Human Services, the federal Environmental Protection Agency, and the International Agency for Research on Cancer.

Ben Smith, a former columnist with saportareport.com, wrote a piece in 2013 about the effort to reclaim Zonolite Park and the role of the South Fork Conservancy in that effort. Smith included the following slice of history about the park and how it came to become what Smith described as an, “asbestos laden wetland:”

From 1950 to 1970, Zonolite was a popular attic insulation processed in northeast Atlanta. The raw mineral later was found to have natural asbestos fibers. File/Credit: Asbestorama 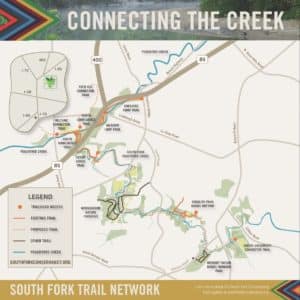 The South Fork Conservancy has a vision to build trails beside Peachtree Creek and connect them with a network in Atlanta and DeKalb County. Credit: southforkconservancy.org