Editor’s Note: This story has been updated to provide the name of the division of Corvias Group that will oversee some student housing in Georgia. 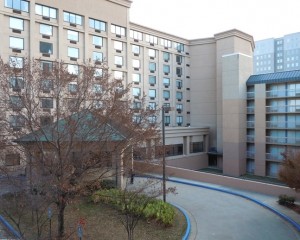 A private company soon will be managing the Piedmont North dorm at Georgia State University, according to a deal approved by the Board of Regents. Credit: GSU

The Board of Regents has approved a deal to put nearly 10,000 students into beds that by 2016 will be managed by one private company. Georgia already has partnered with privately owned entities to manage matters including prisons, distance learning, and roadway construction.

The board approved in November a 65-year deal valued at $517 million with Corvias Campus Living, which is based in Cary, N.C. and is a division of Corvias Group, based in East Greenwich, R.I. Terms are to be finalized next year. The University System of Georgia will retain oversight of the housing program.

One major benefit for the state is to be its release from some $300 million of debt. The existing housing bonds were sold by the state to finance student housing, and the state will no longer be responsible for the debt, according to a statement from the University System of Georgia.

Georgia voters facilitated the privatization of student housing on the state’s campuses when they approved a referendum that was on the Nov. 4 ballot.

Passage of the referendum continues the tax-exempt status of student housing even if private companies operate the facilities. House Bill 788, which was approved this year, provided for the referendum. HB 788 was sponsored by a bi-partisan coalition of ranking Republicans and Democrats that included:

A private company is to manage the dorms at these institutions. Credit: USG, David Pendered

Regents approved the deal with Corvias Campus Living on Nov. 12. The company now operates housing in conjunction with the military and an array of colleges and universities, according to its website.

Both companies list their home state as Delaware and neither provides the names of any corporate officers, according to papers the entities filed with the Georgia Secretary of State.

The regents began the privatization process on dormitories in April. The board released a request for proposals. In a statement released April 14, Chancellor Hank Huckaby said:

Huckaby maintained that theme in a statement released Nov. 12:

The deal calls for Corvias to take over 6,195 existing beds and to develop an additional 3,683 beds in time for fall semester, 2016.

Previous Article
Underground: How an outsider hopes to succeed where others have failed
Next Article
How Do You Avoid Christmas Stress? Choices You Can Make To Reduce Holiday Rabies