The two leading Republican candidates for one of Georgia’s U.S. Senate seats took turns trying to out-conservative each other in a debate Monday. 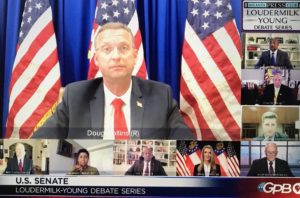 Doug Collins during the APC debate

Collins has been the representative for northeast Georgia’s Ninth Congressional District since 2013, and is well-known as a conservative.

Collins said he does not regret a tweet he made just after U.S. Supreme Court Justice Ruth Bader Ginsburg died, referring to abortion as murder and which read in part “@realDonaldTrump nominating a replacement that values human life, generations of unborn children have a chance to live.”

It sounded to some like he was a bit insensitive about the justice’s death. But Monday, Collins said that wasn’t so.

“What I was looking forward to is not a reflection on Ruth Bader Ginsburg,” Collins said. “It’s a reflection of the anti-life commitment that we’ve seen over the last 40 years in this country, especially coming out of the Supreme Court.” 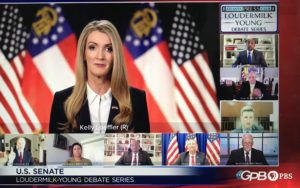 Senator Loeffler during the APC debates.

Loeffler has been a U.S. senator since December, 2019, when Gov. Brian Kemp appointed her to fill out the term of Senator Johnny Isakson, who had retired due to struggles with Parkinson’s disease.

At the time, some pundits thought the choice might have been a GOP move to appeal to center-leaning, female suburban voters by appointing someone similar.

But Loeffler has in fact embraced a polarizing president. She also has a campaign ad declaring herself more conservative than fifth century European chieftain and fearsome conqueror Attila the Hun.

“Just like the president I’m a political outsider, a conservative businesswoman who isn’t just going to rubber-stamp everything that comes to the floor,” Loeffler said Monday.

But he didn’t speak from any place on the far, far left. Warnock wouldn’t be drawn into explicitly endorsing a tax hike on people who make more than $400,000 per year, as proposed by Joe Biden. Warnock simply said that he thinks such people could perhaps afford to pay more. 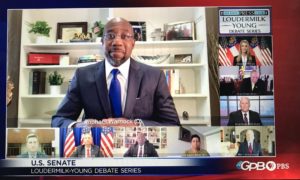 Reverand Warnock during the APC debate.

Warnock said he was the first college graduate in his family, something he attributed not to rugged individualism or to government redistribution of wealth.  But a blend of both.

“I got there through hard work, a sense of personal responsibility, grit and determination,” Warnock said. “But somebody gave me a Pell Grant, some low-interest student loans.”

Isakson, the last senator to hold that seat for a full term, was known as something of a consensus-builder, not a Republican partisan warrior.

And all three leading candidates said they had something in common with that. For one, there’s work on criminal justice reform. Warnock has locally campaigned for various criminal justice reforms, like an to end cash bail, along with his church’s social justice ministry. Collins noted that he was a co-sponsor of the First Step Act, a federal law that directs federal prisons to help inmates prepare for eventual life back outside with things that include job training.

Loeffler pointed out that she supported the CARES Act, the the main federal legislative response to COVID-19, which is bailing out businesses and increased unemployment payments for millions of Americans.

There are a total 20 candidates in the free-for-all race since it’s a special election. It’s all but certain to lead to a runoff. If no candidate gets at least 50 percent of the vote, that runoff will be held Jan. 5, 2021. Loeffler, Collins and Warnock lead the polling by far.

Several of the other candidates criticized the media and the debate hosts for not covering them or for having hosted two rounds of debate.

The debates are hosted by the Atlanta Press Club and GPB. Check out all debate videos here.

This article has been updated to reflect the correct number of candidates.  There are 20, not 21, names printed on the ballot.