One of the 200 business leaders who participated in the Covenant House Sleep Out-Executive Edition knew first-hand what it’s like to be a homeless teenager.

Hannah Booker, 40, is a technology consultant for Accenture and an alum of a Covenant House in New York City. Accenture had a total of 27 people participate in the Sleep Out on Nov. 21. The Accenture team raised more than $64,000 for Covenant House Atlanta.

Booker’s story is one of perseverance – an example of how one can work her way from the streets to corporate America. 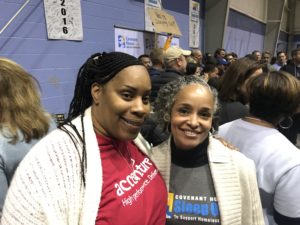 Hannah Booker of Accenture with Alie Redd, executive director of Covenant House Atlanta, at the 2019 Sleep Out Executive Edition (Photo by Maria Saporta)

“My goal is to inspire people,” said Booker, who has volunteered with Covenant House Atlanta. “It comes full circle. Almost 20 years ago. I was in the same predicament as the kids who are here today.”

Booker’s story is heartbreaking. When she was 10 years old growing up in Atlanta, her mother was murdered in Savannah. Her father, who had remarried, had custody but decided he was unable to care for his kids.

“My life really started to break down when I was 10,” Booker said “My siblings were in foster care. I started out as a ward of the state. I was a runaway when I was 15 and 16 years old.”

And then she got pregnant.

“Having my daughter is what changed my entire life,” said Booker, who stayed at Families First. Then she decided to go to New York City to live with her grandmother but ended up bouncing from shelter to shelter – ending up at Covenant House, Booker was able to get an associate degree in New York. “When my grandmother passed in 2008, I moved back to Atlanta,” she said. “I went back to school. I did that for my daughter.”

She was even able to get a Master’s degree in social work, and she worked a the City of Atlanta in the IT department. She then joined Accenture in 2017. In 2019, her daughter graduated from Spelman, and she is now part of Teach for America working at a Kipp Academy in Charlotte.

“It’s so important knowing that my peers and colleagues care,” said Booker, adding that there are more than 554,000 homeless people nationally. “Our leadership understands the problem and answered the call.”

The top individual fundraisers were David Lewis of David Lewis Productions and team captain of “The Misfits,” who raised $61,821; Mark Dodds of Cisco, who raised $39,102; and David Lanier of CBRE and co-chair of the 2019 Sleep Out, Executive Edition, who raised $30,125.

During the event, Alie Redd, executive director of Covenant House Atlanta, reminded the executives that “none of these young people have chosen a life of homelessness.”

The dedication of the Ivan Allen Jr. Legacy bridge on Nov. 25 brought together key Atlanta leaders who spoke of the need to remember our history as well as people who have supported the PATH Foundation’s efforts to develop trails throughout the region. 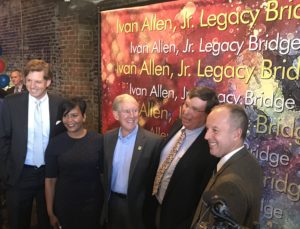 Atlanta Mayor Keisha Lance Bottoms spoke of the legacy of Atlanta Mayor Ivan Allen Jr., who left office in 1970, the year she was born. She recounted a story of how her son said she was the first woman mayor of Atlanta. “No, I’m not,” she told him. (That honor belongs to former Atlanta Mayor Shirley Franklin). “It’s so important we honor our history.”

Ed McBrayer, founder of the PATH Foundation, thanked Jim Kennedy for giving $750,000 – half the $1.5 million cost to turn the bridge into a “walking museum” in Mayor Allen’s honor.

“We will literally connect downtown Atlanta with downtown Anniston in the next three years,” McBrayer said, adding that Atlanta will become “the most trail-connected city in the United States.”

Kennedy said his involvement with the PATH Foundation over the past 28 years has “been one of my great life endeavors” with the creation of 290 miles of trails in the greater Atlanta region. It made sense to use “this beautiful bridge” as a way to honor the former mayor. Kennedy recalled his aunt – Anne Cox Chambers – introducing him to Mayor Allen by saying, “This man took the action that allows our city to become great. He created a city that doesn’t hate.”

The mayor’s grandson – Ivan Allen IV – spoke on behalf of his family members, which included his uncle, Inman Allen. His grandfather helped Atlanta transition from a segregated city in the 1960s to a city recognized as the home of the Civil Rights movement. “This bridge is a symbol,” Allen said.

On Nov. 22, President Donald Trump held a meeting to discuss e-cigarettes and their impact on youth. Atlanta’s own Gary Reedy was one of the top health and nonprofit leaders invited to the White House meeting.

Reedy is CEO of the Atlanta-based American Cancer Society and its Cancer Action Network. During the meeting, Reedy urged the president to remove all flavored e-cigarettes from the market, including mint and menthol.

Reedy said the solution to solving the e-cigarette youth epidemic will not come from the tobacco industry, and he urged the president to direct the Food and Drug Administration to execute its authority over all tobacco products.