The recipient of the Council for Quality Growth’s 2015 Four Pillar Award will be Dan Cathy, president and CEO of Chick-fil-A Inc.

The Four Pillar Award event, which will be held on Oct. 1 at the Georgia World Congress Center, will have a special twist. The night will shine a spotlight on the Westside community just across Northside Drive from the GWCC and the new Atlanta Falcons football stadium.

In an interview, Cathy said he accepted the award on the basis that it could be used as a platform to reflect attention on the Westside — an area that has some of the greatest challenges of any community in the city of Atlanta — from crime, poverty, drug and alcohol abuse, vacant and dilapidated property and low education outcomes.

“There are a lot of people who have been at the front lines of this effort,” Cathy said of initiatives underway to help improve the Westside. “I’m just another voice of many.”

He said his goal was to increase awareness of the needs that exist in the Westside neighborhoods and to help raise consciousness for the city-wide efforts to revitalize the area. “I will accept this award on that basis,” Cathy said. 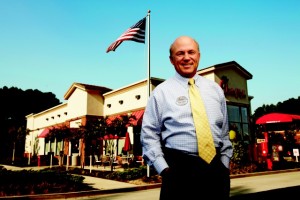 The Council for Quality Growth also has pledged to make a gift in Cathy’s honor to causes supporting Atlanta’s Westside communities.

“Dan is devoted to continually improving the greater Atlanta community,” said Tim Lowe, 2015 chairman of the Council for Quality Growth. “His passion for and commitment to communities throughout metro Atlanta gives us insight into the measures he is taking to bring growth and prosperity to areas of the city that need it most.”

The theme of the 2015 tribute will be “Climb with Care and Confidence,” which is one of the many lessons Cathy learned from his father, S. Truett Cathy, the founder of Chick-fil-A who passed away last year.

Dan Cathy and his siblings grew up working in the family business, but his official tenure in the company began in 1975. He has served as president and chief operating officer since 2001, and he became chairman and CEO in 2013. The family-owned company now has members of the third generation working in the business, the country’s top quick-service chicken brand.

“Dan is a true servant leader,” said Michael Paris, president and CEO of the Council for Quality Growth. “His unwavering commitment to company values and serving the community makes him the ideal recipient of the Four Pillar Award this year. In all he does, Dan represents quality, responsibility, vision and integrity.”

The Council usually has four speakers who each talk about one of the honoree’s four pillars. When asked, Cathy jokingly said he would be fine with any of the speakers “as long as it’s not my wife.”

In all seriousness, Cathy said he hopes to be able to contribute to a cohesive plan with design principles for the Westside that would include being sensitive to the significant role the area has played in Atlanta’s history.

“We need to start building synergies with the different investments that are being made,” said Cathy, who continued to hint that the Chick-fil-A Foundation would be making some announcements in the near future. “We want to be supporting some of the initiatives that are already out there. We want to add another voice of encouragement.”

The Woodruff Arts Center annual corporate campaign has reached a record high for its 2014-2015 year — raising a total of $13.4 million.

Now that is millions of dollars more than the corporate campaign has ever raised before, but it also is the first time that the annual Woodruff Arts Center corporate campaign was integrated as a campus-wide effort among all the divisions.

“All of us associated with the Woodruff Arts Center and this year’s campaign cabinet are extraordinarily grateful to Atlanta’s corporations,” said Paul Garcia, campaign chairman and the former CEO of Global Payments Inc. “These companies recognize the importance of arts and arts education to our community, and they demonstrate that year after year with their outstanding support.”

The combined fundraising initiative included the corporate support given to the overall Woodruff Arts Center as well as the Alliance Theatre, the Atlanta Symphony Orchestra and the High Museum of Art. The previous record for annual corporate support across the campus was $11.2 million in 2012-2013 campaign.

“Integrating our Annual Corporate Campaign fundraising into one coordinated effort that benefits all of our art and education work was welcomed by our corporate supporters,” said Virginia Hepner, president and CEO of the Woodruff Arts Center. “They appreciated the efficiency of unified requests, and we believe that helped us achieve this new level with our campaign. At the same time, we also broadened the exposure for all donors across the campus.”

“We are grateful for Paul Garcia’s leadership and the generosity of all of our donors,” said Janine Musholt, vice president of advancement for the Woodruff Arts Center. “We owe a great debt of gratitude to all of the leaders on the campaign cabinet who worked tirelessly to help us set this record.”

That multi-year campaign is focused on increasing endowment, capital funding for renovations to the Alliance Theatre and other areas of the Arts Center’s campus. To date, the Transformation Campaign, which was publicly launched in April, has raised in excess of $75 million of its $100 million goal.

The Atlanta Scholars Kollel, which provides Jewish learning opportunities in the metro area, honored Bernie Marcus, co-founder of The Home Depot Inc., on May 31 at a Georgia Aquarium event. The program featured a conversation between Marcus and his long-time friend and colleague, Michael Leven, CEO of the Aquarium (the gift Marcus gave to the state of Georgia). Before answering Leven’s first question, Marcus said, “I’m politically incorrect, and I’m going to say things that are going to offend people.” He said how important it was for Jews in the United States to support Israel. “The world is changing, and not for the good, but for the worse,” Marcus said. “This is a show that’s not going in the right direction. You and I, Mike, are not going to see the end of the show. I don’t like what’s happening.”

Marcus repeated a common refrain: That he would be unable to start Home Depot today under existing regulations and federal requirements. He also said he doesn’t believe Jews who say they don’t believe in the State of Israel to be real Jews. But he went on to say he doesn’t always agree with Israeli policies.

Leven closed out the conversation by sharing a story about Marcus. Leven had been CEO of the Georgia Aquarium in 2009 when he was approached by Sheldon Adelson to run the troubled Las Vegas Sands Corp. He asked Marcus what he should do. And Marcus told him he should take the job, even though it would mean Marcus would be left without a CEO for the Aquarium. “Why?” Leven asked. “If you take this job (and turn around Las Vegas Sands), it will be good for the United States and the State of Israel,” Marcus said. “If you do a good job, the guy you are working for will give money to the State of Israel and to the country. But there are a couple of conditions. You will move to St. Andrews in Florida. And I will negotiate your deal for you because you never negotiated a good deal for yourself in all the years that I’ve known you.”

Six years later, Leven did turn around Las Vegas Sands; he has a home in St. Andrews, Fla., and he is back as CEO of the Georgia Aquarium.