By Maria Saporta
As published in the Atlanta Business Chronicle on Aug. 12, 2016

Helen Smith Price could not have been more prepared when she was tapped in April to become the new president of The Coca-Cola Foundation.

Price has served as executive director of the foundation since 2001, joining the company in 1993. As the protégé of her predecessor, Ingrid Saunders Jones, she also has seen how the Foundation has evolved over the years. 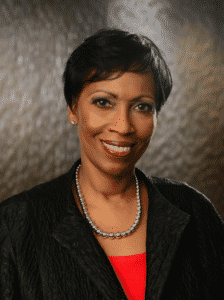 “In 2007, we took a hard look at how Coca-Cola engaged with the community,” Price said in an interview at the company’s headquarters. “We knew it was all over the place. The question was whether we were having the maximum impact we could have.”

Since then, the company’s giving has been focused on water stewardship, women empowerment and well-being as well as its longtime commitment to education.

At the same time, the company’s giving has grown.

“When I first started working with the foundation, it was about $25 million in 2000,” Price said in an interview at the company’s headquarters. “Last year, the foundation gave away about $85 million, and our total giving was about $117 million.”

Despite its more formal giving policies, Price, an Atlanta native, said Coca-Cola has a special relationship with its hometown.

“Atlanta is our home,” she said. “We are going to do some things differently here — unapologetically. When you live and work in Atlanta you should feel the benefits of our presence.”

In 2015, the Coca-Cola Co. contributed more than $13 million to about 500 different organizations in metro Atlanta. In the past decade, both the company and the foundation have invested more than $160 million throughout Atlanta. And that doesn’t include the the tens of thousands of volunteer hours contributed by Coke’s workforce.

Price, who is also is the company’s vice president of Global Community affairs, is bubbling over with projects – both in Atlanta and around the world. Stay tuned.

Business education is no longer a man’s world. That was the message of a panel discussion held at the Jackson-Spalding public relations firm with the three women business deans now at three top Atlanta universities.

Maryam Alavi, dean of the Scheller College of Business at Georgia Tech, said 51 percent of her undergraduate students are women.

“Georgia Tech’s graduates represent the highest number of women and minorities in the nation,” she said. “But we are not happy and satisfied. We are working very hard to enhance the opportunities for women at Georgia Tech.” 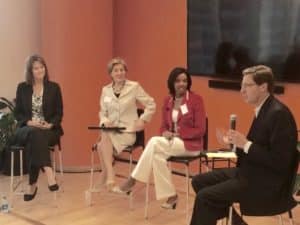 Kathy Schwaig, dean of the Coles College of Business at Kennesaw State University, said her school will have 6,400 students this fall with a focus on entrepreneurship.

“We have a women’s leadership center, and we are really focused in helping young women,” she said, adding that when she joined KSU’s business school, she was the only woman in the executive ranks. Now half of her team members are women.

The deans said it’s not just the world of business education that is becoming more welcoming to women.

“If you have the right skills and the right capabilities, these are amazing times,” Alavi said. But she warned that everyone will have to be open to changes in technology. “Over the next 20 to 25 years, there will be a five to ten-fold increase in technology.”