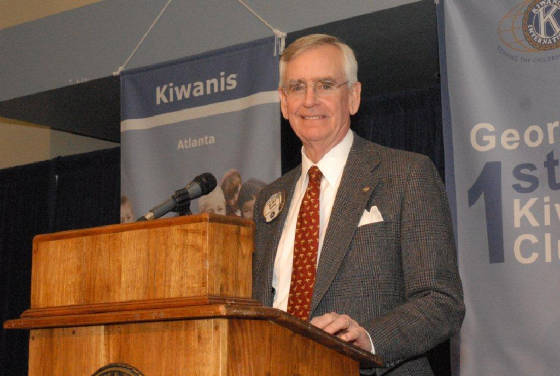 The Kiwanis Club of Atlanta is turning 100 years old on May 27, and the organization is celebrating the next several months by exploring its history.

“It’s been fun,” said Blake Young, president of the Kiwanis Club of Atlanta, the oldest Kiwanis Club in Georgia.

Former Kiwanis President Bo Spalding is chairing the Centennial Committee, which has planned for a series of events leading up to the anniversary. 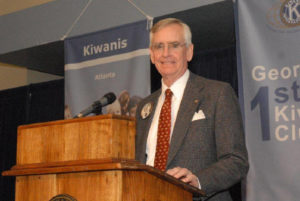 It will hold a Centennial Gala on April 24 at the Atlanta History Center that will feature the Big Chicken Beatles Band, which covers songs from the popular 1960s rock group.

Georgia’s first Kiwanis Club was founded in 1918 by 43 charter members at the Kimball House hotel in downtown Atlanta near Five Points. One of its earlier service projects was selling Liberty bonds to support Allied troops in the first World War.

“We are first and foremost a service club,” said Young, adding that the Kiwanis Club will have a special service project at the Hillside residential facility to celebrate its Centennial. 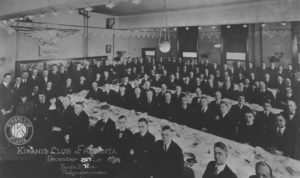 Kiwanians will be building a therapeutic herb and vegetable garden at Hillside, a 129-year-old Atlanta not-for-profit providing residential and community mental health services for children, adolescents and families. The horticultural therapy garden will be Hillside’s second. Kiwanians built the first one in 1996.

The Kiwanis-Hillside relationship dates back to 1930, when it opened the Kiwanis Cottage at Hillside.

“Philanthropy in the Classroom” in 2009. All of those relationships continue. 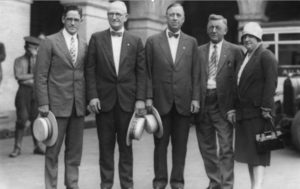 Also, at selected Tuesday luncheons during the year, Kiwanians will take on the roles of historical club leaders – sharing perspectives on the club’s history and Atlanta history by extension. Examples of honorees include Henry Heinz and Virgil Warren, who were Kiwanis Club of Atlanta presidents in 1919 and 1947, respectively. Heinz went on to become Kiwanis International president in 1927, and Warren was a legendary supporter of the Atlanta Boys Clubs.

Young said Kiwanis is a special organization with 227 members. “Our members serve the community locally and worldwide, while building friendships that last a lifetime,” he said.

In 2017, Kiwanis donated $245,000 to nearly 60 nonprofit organizations in metro Atlanta. The Kiwanis Foundation of Atlanta, founded in 1953, has given away a total of $5.6 million since its inception – with a focus on youth service.

Also the Atlanta Kiwanis Foundation raised and donated $150,000 to the Kiwanis International-UNICEF Eliminate Project, which seeks to eradicate maternal and neonatal tetanus, a disease that has claimed 34,000 lives annually worldwide.

“We are here dedicated to serve,” Young said. “We are really proud to carry the Kiwanis banner.”

Morehouse and the inauguration

For Morehouse College, the new year started with a bang.

But Jan. 2 also was the first official day at work for Morehouse College President David Thomas, who was named in October. Thomas has been in higher education for 30 years, and he most recently served as professor of business administration at the Harvard Business School. he also is a former dean of Georgetown University’s McDonough School of Business.

Mayor Bottoms made special mention of the importance of Historically Black Colleges and Universities during her inaugural address saying she wanted “to enhance and fortify the greatest concentration” of HBCUs in the world. Atlanta is home to Morehouse College, the Morehouse School of Medicine, Spelman College, Clark Atlanta University, Morris Brown and the Interdenominational Theological Center.

Bottoms pledged “to make them meaningful partners in the transformation of the Westside,” and she said she would seek to resolve the city’s lawsuit with Clark Atlanta over the rights of the land that the city acquired from Morris Brown College.”

“I want to take a moment here to point out that, as a graduate of Florida A&M University, I am the first Atlanta mayor who is an HBCU graduate who did not attend Morehouse College or Howard University,” Bottoms said.

The Atlanta-based American Cancer Society added seven new members to its 21-member board on Jan. 1.

“We welcome our new members, who bring unique perspectives and expertise to our outstanding board,” Kevin J. Cullen, MD, 2018 chair of the Society’s board, said in a statement. “The extensive talent and knowledge of our existing and newly elected board members is critical to helping the American Cancer Society continue its mission to lead the fight for a world without cancer by attacking cancer from every angle.”

Two prominent Atlanta business executives have joined the board of CURE Childhood Cancer: Matt Gephardt of the Gephardt Group and Bill  Wernecke of Delta Airlines.

CURE Childhood Cancer, founded in Atlanta in 1975, funds breakthrough research to find a cure for pediatric cancer while providing comprehensive support to patients, families and the provider communities that support them.

“We are thrilledthat Bill and Matt have agreed to lend their considerable talents, relationships and leadership to help CURE advance our mission to find cures and treatment options for pediatric cancer,” said Kristin Connor, executive director of CURE Childhood Cancer. “Their diverse backgrounds will further strengthen our ability to impact patients and families.”

Gephardt’s connection to CURE is personal. At age 17 he was diagnosed with Rhabdomyosarcoma on his prostate and bladder, and he was treated by Dr. Abdel Ragab, founder of CURE.

“Almost 40 years ago, the founder of CURE gave me my life back so there is no better way to honor that gift than to dedicate my efforts and service to this organization,” Gephardt said. “There’s still a lot of work to be done to ensure we fund the important life-saving and hope-giving work that will make a difference for children suffering from cancer.”

While he doesn’t have a such a personal connection to CURE, Wernecke said the organization “has done a remarkable job of raising funds to support breakthrough research while still providing care that makes a difference to patients and families. I’m excited to roll up my sleeves and get involved with helping to achieve CURE’s mission of eliminating pediatric cancer.”