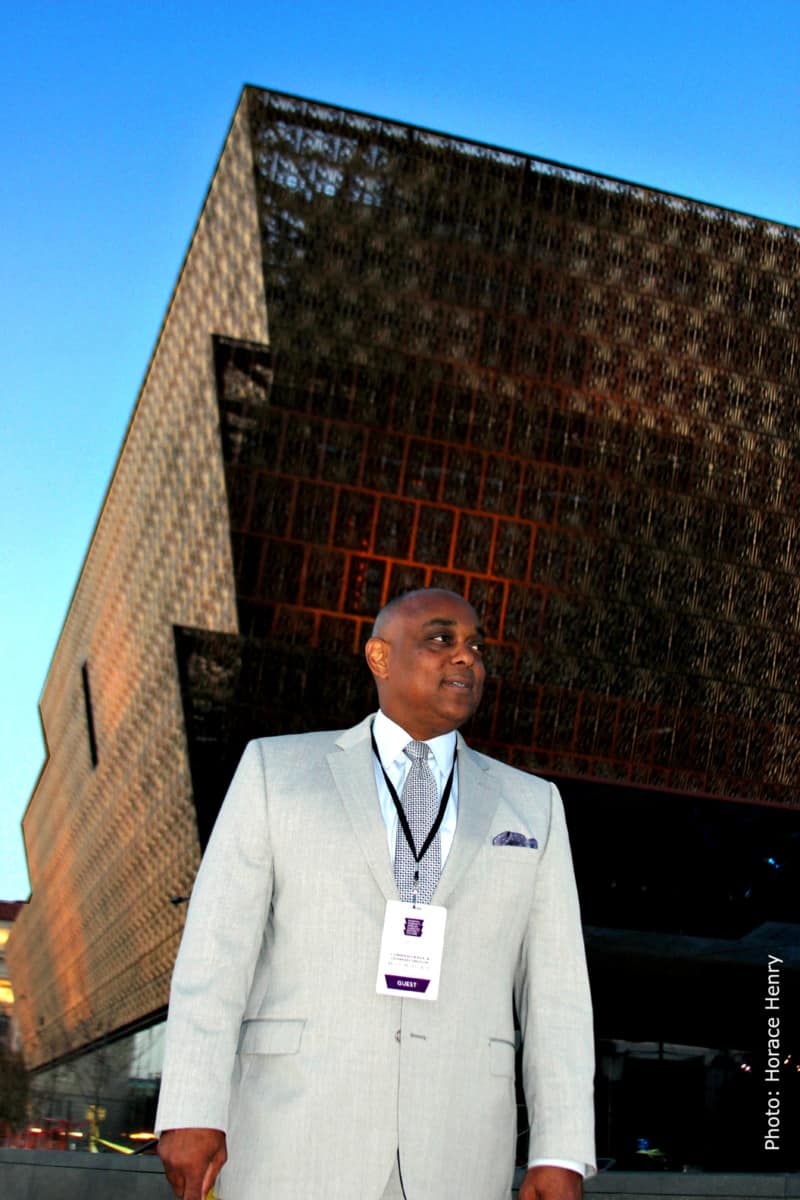 By Maria Saporta
As published in the Atlanta Business Chronicle on Sept. 23, 2016

The family of the late Herman J. Russell will convene in Washington, D.C., on Sept. 24 for the opening of the Smithsonian’s National Museum of African American History and Culture.

The opening of the museum will be of special significance to the Russell family because their firm — H.J. Russell & Co. — was the lead contractor on the project.

“Obviously it is an incredible honor,” said Michael Russell, CEO of the firm. “It was a very important project for a firm like ours because it represents our history. For me, that makes this an extra-special job — to tell the story of African-Americans in this country. It’s going to be a fabulous building.” 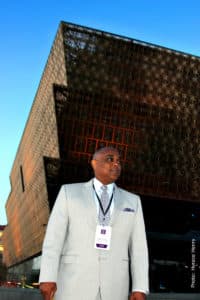 The ground-breaking for the museum was in February 2012, and the 400,000-square-foot building is located on a 5-acre tract next to the Washington Monument — at the corner of 15th Street N.W. and Constitution Avenue in Washington. The museum will include exhibition galleries, an education center, a theater, an auditorium, a café, a store and offices.

The building, which is costing $400 million to construct, was designed by award-winning architect David Adjaye. The museum also is certified LEED Gold (Leadership in Energy and Environmental Design).

Michael Russell said the firm began positioning itself to be the construction firm on the project going back to 2009.

“We knew the significance of the project,” Russell said. “We were fortunate enough to have a strong relationship with [Georgia Congressman] John Lewis, who was instrumental in getting the project done.”

The museum also was given the green light when Wayne Clough, the former president of Georgia Tech, was serving as the secretary of the Smithsonian Institution.

Michael Russell said his whole family will be there for the opening, including his two siblings Donata Russell Ross and Jerome Russell. Their father, who passed away on Nov. 15, 2014, also will be with them in spirit.

“When we started working on this project, my father was alive, and he knew we were going to be doing it,” Russell said. “He would be proud.”

David Martin will be retiring after 38 years as executive director of the Georgia Council on Economic Education effective June 20, 2017.

The Georgia Council was founded in 1972, and Martin joined the staff as associate director in 1979. He became its first full-time executive director in 1982.

“I would rather leave a little too early rather than a little too late,” Martin wrote in an email. “Technology is passing me by. I still type checks and envelopes on a typewriter!”

Martin, who plans to spend more time with his grandchildren, also put his own life in perspective.

But he added that he is a man of faith, and “God is not done with me yet.”

More seriously, Martin said the organization will be half-way through its 2016-2018 campaign, and that it would be a good time to step down. “The heavy lifting will be done,” he said.

Marie Gooding, a first vice president and chief operating officer at the Federal Reserve Bank of Atlanta, will be chairing a succession and transition team for the council. She is the immediate past chair of the council, and she is chair of the nominating committee.

The mission of the Georgia Council is to help teachers teach economics in the public and independent schools of Georgia. Martin will be receiving a Lifetime Achievement Award at the Annual Conference of the Council for Economic Education/National Association of Economic Educators in Phoenix in early October.

When SunTrust Banks celebrated its 125th anniversary on Sept. 19 at the Atlanta History Center, three historical columns provided the backdrop.

Bill Rogers, CEO of SunTrust Banks, noted they are part of the bank’s history, which began in 1891 in downtown Atlanta. The columns came from the historic Equitable Building that had been built in 1892 by the architectural firm of Burnham & Root. When it was built, it was Atlanta’s tallest building, standing at eight stories. It served as the bank’s home for decades. 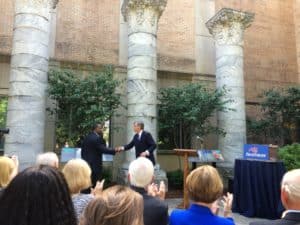 The building was torn down for the construction of Woodruff Park, which gave the Trust Company Tower a front lawn with a Peachtree frontage. Three of the columns made it to the new Equitable building across Peachtree Street, where they stood until its front plaza was redesigned. And now they are located at the Atlanta History Center, making it an appropriate spot to celebrate the bank’s anniversary. “The original Trust Company building was built as the Equitable Building,” explained Sheffield Hale, president and CEO of the Atlanta History Center, providing the historical link of the columns. “They now are permanently here.”

Alvin Wilbanks and a PAGE-Turning event

Long-time Gwinnett Superintendent J. Alvin Wilbanks and his team was honored at this year’s “A PAGE Turning Event” at the Gwinnett Infinite Energy Forum on Sept. 12. The annual event is put on by PAGE (Professional Association of Georgia Educators).

“Alvin Wilbanks has done a great deal in his 50-plus years in public education to merit recognition,” said Lynn Varner, a PAGE representative.

The Gwinnett School System is the 13th largest in the nation employing about 22,000 employees, and it is widely recognized as one of America’s top urban school districts. Wilbanks and Gwinnett received the “Broad Prize for Urban Education” in 2010 and 2014. And two Georgia governors and a U.S. secretary of education have called upon Wilbanks to help them craft significant education legislation. In 2005, Wilbanks also was named Georgia’s “Superintendent of the Year.”

They were approved at the quarterly meeting of the alliance on Sept. 15.

The board also approved a transition of leadership. Doug Hertz completed his tenure as chairman, and he is being succeeded by Larry Gellerstedt III.

“It’s a tribute (to the organization) that it survived my leadership,” Hertz joked at the end of the meeting.

Gellerstedt also commented on the unique civic relationship he and Hertz have shared. Hertz has followed Gellerstedt in several leadership roles, such as serving as chairman of the Woodruff Arts Center.

“I’m not used to inheriting an organization that’s in such good shape,” Gellerstedt said, adding that it was an honor to follow Hertz. “My dad and Tom Cousins founded this organization, so there’s no pressure.”