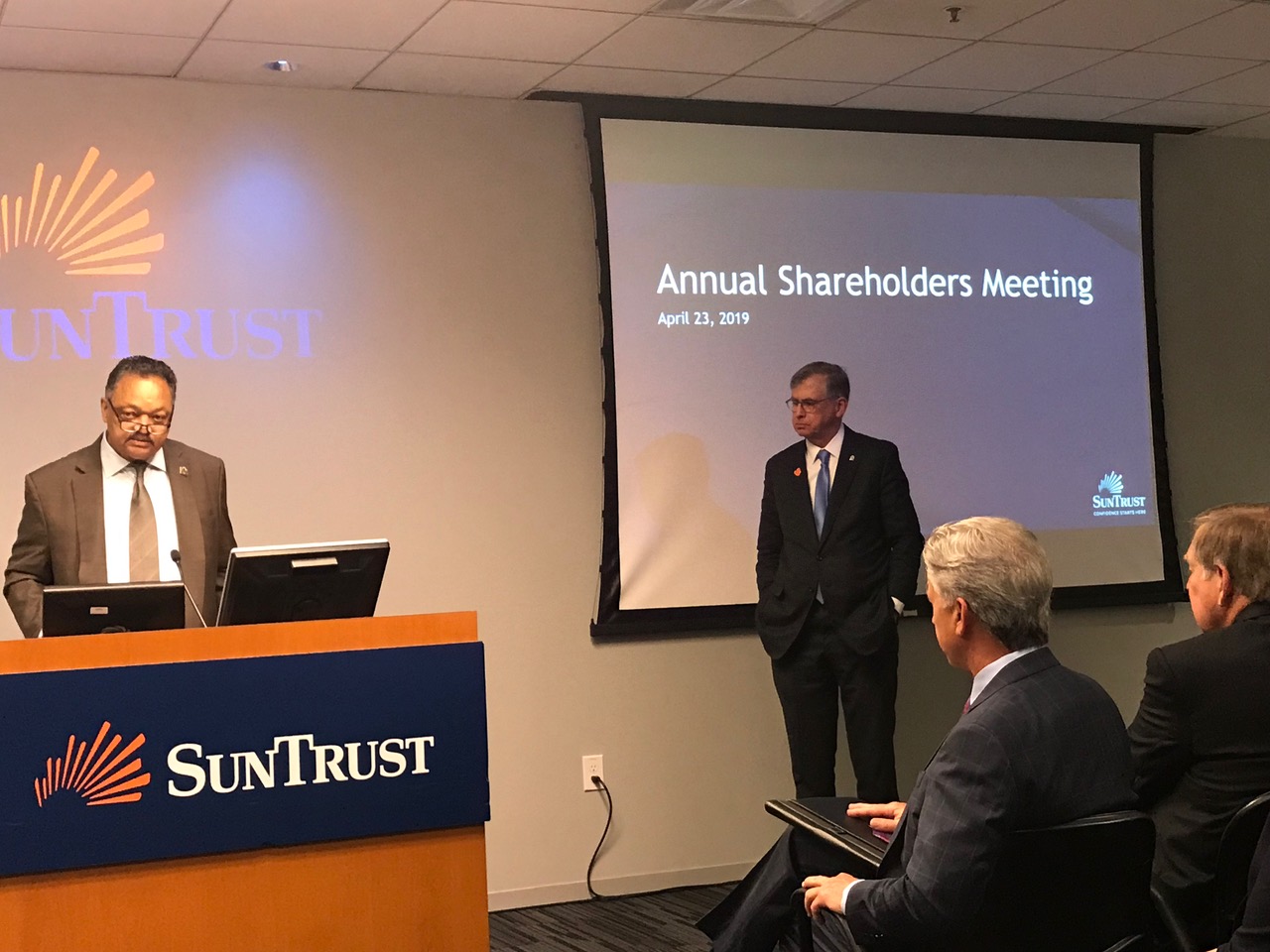 Little emotion was on display at what likely was the last annual meeting of SunTrust Banks Inc., held in Atlanta on April 23 at the SunTrust Plaza Garden Offices next to its corporate headquarters. 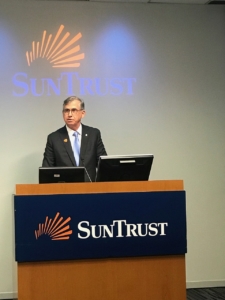 By the end of 2019, SunTrust and BB&T are expected to close their “merger of equals” – a move that will create a yet-unnamed new bank that will be headquartered in Charlotte, N.C., rather than Atlanta.

“There’s always nostalgia, but it’s also about looking forward,” said Bill Rogers, SunTrust’s chairman and CEO who will be taking on a key role in the new bank. “I’m excited about the future and what we can do in Atlanta.”

David Ratcliffe, retired CEO of Southern Co. who is SunTrust’s lead director, said there’s a range of emotions when such a merger takes place. But he said he also is excited about the future progress of the new bank.

The longest-serving SunTrust director – Douglas Ivester – happened to retiring off the board at the annual meeting.

“Personally, I look back on that 20-plus years with great pride,” Ivester said right after the annual meeting. “I think the bank has equipped itself for a future in a way that didn’t exist 20 years ago.”

But Ivester, a Georgia native, also expressed mixed feelings about the pending merger although he voted in favor of the deal.

“Anytime you lose a headquarters, regardless of the nature of the business, it’s painful,” Ivester said. “I would rather see any headquarters based in Atlanta than anywhere else. But that’s not the case.” 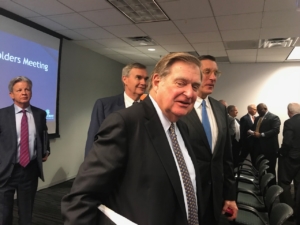 It also was the end of another era. With Ivester’s departure, there is no longer any director who had a direct connection with Coca-Cola. There was time when there was such a close relationship between Coca-Cola and SunTrust, it was hard to see daylight between the two companies.

“There used to be overlaps, but the companies tended to be more local then,” Ivester said. “The companies are national and international, and the overlaps are no longer geographic. It’s just an evolution.”

“I have confidence in Bill (Rogers),” Williams said. “I’m sure it will work out. I do wish the headquarters could have stayed in Atlanta.”

Williams was the last SunTrust executive to serve on Coca-Cola’s board until he retired in 2013.

“There are no longer directors (on the respective boards), but the relationships are still there,” Williams said.

The SunTrust annual meeting did have a special guest – civil rights leader Jesse Jackson – who urged the bank to continue to honor Atlanta as a center for black commerce and leadership.

Instead of making comments from the floor, Jackson went to the podium where Rogers had stood. 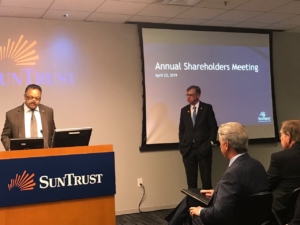 While Jackson said he is concerned about the concentration of the banking industry, he is more concerned about issues of equity and the commitment to improve the lives of people less fortunate. He urged the bank to make sure all firms had an opportunity to do business with SunTrust and the new bank – especially in the area of professional services.

“Atlanta is too big and too black to be so white,” Jackson said. “Atlanta is the richest African-American community in America. (But) they are not in this room.”

Rogers then jokingly told the group that Jackson had turned the podium into a pulpit. He then repeated a SunTrust mantra: “When you build your community, you build your bank.”

The Association of Fundraising Professionals Greater Atlanta Chapter will host its 37th annual National Philanthropy Day luncheon at the Georgia Aquarium on Nov. 7.

Etta Raye Hirsch will be honored as the Philanthropist of the Year for being a generous donor and focusing her efforts on organizations that care for vulnerable populations. 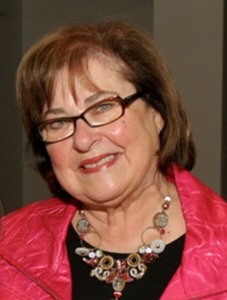 Hirsch is a first generation American, raised with humble beginnings from a small town in Tennessee. Just before her husband’s passing in 2004, the couple created the Henry and Etta Raye Hirsch Heritage Foundation.

Since then, Hirsch has donated more than $2 million in annual gifts to the Jewish Federation of Greater Atlanta. She has also contributed toward projects that build future resources, such as the Atlanta Jewish Foundation’s Family Philanthropy Initiative.

The Henry and Etta Raye Hirsch Heritage Foundation has been a major supporter of Creating Connected Communities, Ian’s Friends Foundation and The Drake House. Hirsch has also been a supporter for educational and youth-serving organizations, including Create Your Dreams, KIPP Metro Atlanta Schools and Fugees Academy.

Jack Hardin will be honored as the Volunteer Fundraiser of the Year. As a founding partner of Rogers and Hardin, he has committed his life to raising funds and awareness for the homeless, and he currently co-chairs the United Way Regional Commission on Homelessness.

Hardin has secured nearly $50 million for Homefirst Atlanta to invest in proven strategies to make homelessness rare, brief and non-recurring. He also co-founded the Gateway Center, which works to end homelessness through therapeutic programs and community collaboration.

The Gateway Center takes pride in having served more than 35,000 individuals since opening in 2005. Hardin also serves as vice chair for Georgia Works! and is a board member for Grady Memorial Hospital.

John Webber will be honored as the Philanthropic Leader of Tomorrow honoree.

Webber is a longtime supporter of Covenant House Georgia. Through Covenant House, Webber has served as an active leader and advocate for youth experiencing homelessness and escaping human trafficking in Georgia. In 2019, Webber chaired the Young Professionals Sleep Out, and under his leadership, the event raised more than $127,000 for Covenant House Georgia’s crisis shelter.

Shortly after Genuine Parts Co.’s annual meeting on April 22, the board transferred the title of chairman from Tom Gallagher to the company’s CEO Paul Donahue.

Two former chairmen and CEOs of Genuine Parts – Wilton Looney and Larry Prince – had passed away since the 2018 annual meeting. And Gallagher led shareholders in a moment of silence for his predecessors.

No shareholder asked a question or made a comment at the end of the meeting. In the past, Looney would always stand and give his observations of the year gone by. Although no one took his place at the 2019 meeting, one director commented that Gallagher might play that role next year.

Meanwhile, Donahue, who is on SunTrust’s board, said he was “incredibly humbled” to become the company’s sixth chairman and fifth CEO in Genuine Parts’ history.

“Tom, Wilton and Larry – those guys are legends,” Donahue said. “They set a very high bar for those us trying to follow in their footsteps.”

Sharing the podium at Genuine Parts annual meeting with Donahue was Carol Yancey, the company’s chief financial officers. Yancey, who just turned 56, would be the right age to succeed Donahue, who is 62.

“Carol would absolutely be a candidate,” Donahue said. “She knows our company. She knows our culture. Carol can do whatever she wants to do. I think the world of her.”