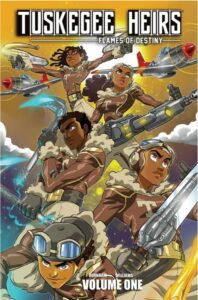 Inspired by the segregated Army air program which escorted bombers across fascist Italy and Northern Africa during World War II, Burnham and Williams conceived a five-person team — Slip, Genesis, Ayanna, Omar and Able — who train on the legendary Moton Field and use the same strategies and skills as their namesakes to overcome their enemies and save the world.

Calling them “the original top guns,” fictional character Col. Mars tells his newest recruit, Able, “I’m talking squads so tough, that the very people who hated them requested them as escorts on missions.”

“They don’t have any super abilities or powers,” said Brunham, “they’re just really capable, [and]  intelligent, just like the Tuskegee Airmen and the people that worked with them.”

A partnership 20 years in the making, writer and author Burnham moved to Atlanta after graduating from Grambling State University. He had an issue, though. He was having difficulties finding a quality illustrator that could draw Black characters with realistic features.

A close friend introduced Brunham to Williams, who had the talent that Burnham was looking for. 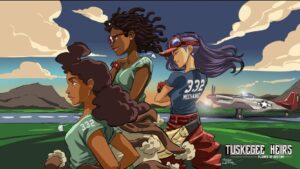 When their first series, Starving Artist, was released in the early 2000s the two talked to a clerk at Criminal Records in Little Five Points about putting their book on their shelves. It sold out in hours.

Fast forward to a few years ago, Burnham and Williams were promoting a children’s book at a comic convention when an older gentleman looked at Williams’ designs and asked him why hadn’t created anything about aviation.

Williams then talked to Burnham about his aspirations of developing drawings of a group of young Tuskegee Airmen, giving them superhero-like features and the series was born.

“We wanted it in the future so we can add young ladies and robots, but also didn’t want to dishonor anything about the actual Tuskegee Airmen,” Burnham told SaportaReport. “This way we could reach back and talk about the Tuskegee Airmen and glorify them as the heroes that they are.”

When it comes to artistic endeavors, forming a relationship like Burnham and Williams’ is no easy feat. However, both had enough respect for one another that they could listen to each other’s ideas and build a concept together.

“I’m humble enough to say, ‘if your idea is better [than mine], let’s break it down,’” Williams said.

Both agree that getting their work out to the public is hard, but they chose to go the route of publishing a fully developed concept with quality illustrations.

“Greg and I are actually living proof that taking the quality route is hard,” said Williams. “It takes determination; it takes dedication. You have to be on the same page and money cannot be your endgame, with the concept that you want to rest beyond you.”

Burnham and Williams released issue four of Tuskegee Heirs: Flames of Destiny last year. You can purchase them at Challenges Games and Comics inside North DeKalb Mall, Medu Bookstore inside Greenbriar Mall, their official website or visit them at tables 319 and 321 in Artist Alley at Dragon Con this weekend at AmericasMart on John Portman Blvd. in downtown Atlanta.

Not really a good idea