The Okefenokee Swamp is one of Georgia's Seven Natural Wonders. (Photo by Carlo Lisa, Unsplash)

Public comment has opened for a controversial mining plan less than three miles from South Georgia’s iconic Okefenokee Swamp. A unique ecosystem with around 424 animal species and 620 types of plants, the Okefenokee is the largest blackwater swamp in North America.

On Thursday, Jan. 19, Georgia’s Environmental Protection Division completed its initial review of the plan presented by Twin Pines Minerals, an Alabama mining company. The state agency has now opened the Mining Land Use Plan for a 60-day public comment period, a requirement to obtain the permit.

Under the proposal, Twin Pines would be able to mine 582 acres along Trail Ridge, a hydrological divide between the swamp and St. Marys River. The mining company is seeking ​​titanium dioxide, a mineral primarily used for its white pigments. 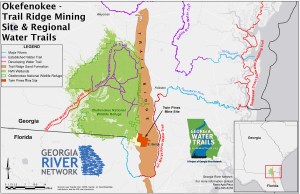 A map of the impacted area. (Courtesy of the Georgia River Network.)

While Twin Pines officials maintain that their plan can be carried out without damaging the swamp, many environmental experts and advocates disagree. According to 2022 research released by C. Rhett Jackson, a professor of Water Resources at the University of Georgia, an estimated three cubic feet per second would be lost to the Okefenokee and St. Marys — 2.7 billion liters each year.

Lower water levels would increase fire risk, destroy habitats and industrial lighting would degrade the area’s designated Dark Skies. In September, 87 scientists penned a letter of concern regarding the plan at the Okefenokee’s doorstep.

Twin Pines President Steve Ingle called the public comment period an “important milestone” in a recent press release, adding, “This is a great opportunity for people to learn the truth about what our operations will and will not do, and the absurdity of allegations that our shallow mining-to-land-reclamation process will ‘drain the swamp’ or harm it in any way.”

The area is now protected under the Biden admin’s new Waters of the United States Rule, which covers the nearly 600 acres of wetlands left vulnerable by former President Trump’s “Navigational Waters Protection Rule.” The increased protections mean that rather than only needing a state permit, Twin Pines must now also receive federal permission to mine next to the swamp.

“If Twin Pines goes out and fills the wetlands next to the Okefenokee without a federal permit, they will be liable under the Clean Water Act,” Southern Environmental Law Center Senior Attorney Megan Huynh told SaportaReport in a recent interview. “The bottom line, as we see it, is that Twin Pines shouldn’t be permitted to fill wetlands that everybody agrees are currently protected by the Clean Water Act, especially when doing so would put one of our country’s greatest natural resources at risk.”

For an in-depth look at the proposal, click here.

Previous Article
Westside Future Fund offers lessons on building communities from the ground up
Next Article
APS asks stakeholders for financial support, mentoring during State of the District event