In the early 1960s, the Atlanta Student Movement bubbled up from the historically black colleges on the west side of downtown.

They wanted to be able to eat at restaurants, shop at department stores and not live as second-class citizens.

But their efforts were not being covered by the traditional media. Even the existing black press ignored them – fearing they were too radical and disruptive to the status quo. 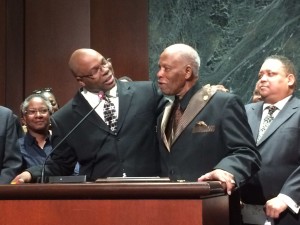 That’s how the Atlanta Inquirer was born. Several black leaders – including businessmen Herman Russell and Jesse Hill – put their support behind the upstart.

Fifty-five years later, the Atlanta Inquirer is still in print – largely because of the dedication of John B. Smith Sr., who has been the publisher for decades.

The Atlanta City Council recently honored Smith for his tenacity and dedication to Atlanta and journalism.

In an era where journalism has had its challenges, Smith was particularly touched when his son, John Smith Jr., spoke of carrying on. 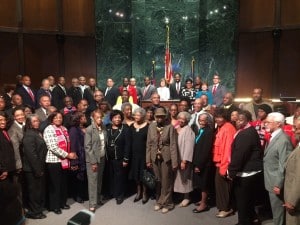 Xernona Clayton, the first black woman in Atlanta to host a news television show and the founder of the Trumpet Awards – credited Smith and the Atlanta Inquirer for telling the story of the civil rights movement, saying the black community may not have known about it otherwise.

The Atlanta Press Club will induct Smith and the Atlanta Inquirer into its Hall of Fame later this year.