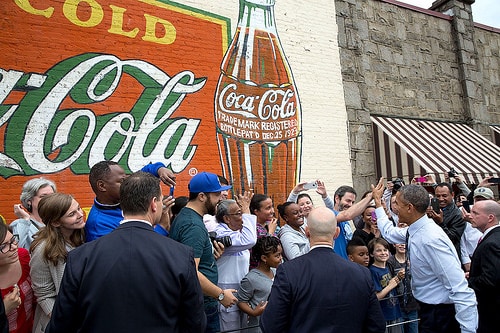 Manuel’s Tavern is being refurbished inside and out.

The Coca-Cola Company is restoring the painted Coke sign that has graced the tavern’s wall for decades.

A hundred years ago, one of Coca-Cola’s top advertising tools was painting larger-than-life signs on the sides of buildings all over the country.

Those signs, painted by specialists who used a stencil provided by the Coca-Cola Company, fell out of favor as billboards started popping up on major roadways.

As time went on, the paint on those walls began to chip and fade, and those advertisements got a new name – ghost signs.

Coca-Cola Company archivist Ted Ryan said the wall-painted signs are making a comeback with the preservation of older buildings.

The company decides which paintings to restore on a case-by-case basis depending on the location, the customer and the building’s significance.

It didn’t hurt that Manuel’s has been a longtime customer in Coca-Cola’s hometown.

When Manuel’s Tavern shut down for renovations at the end of last year, it began exploring a possible restoration of its Coca-Cola sign.

The company said it would pay for the restoration – bringing Jack Fralin, an expert sign painter from Virginia.

The restoration is under way, with the existing image being blasted from the exterior brick wall. And Fralin will hand-paint the new sign to its previous Coca-Cola glory.

The tavern’s owner Brian Maloof said the sign has been a landmark for people looking for the tavern.

Instead of playing much of an advertising role, these signs actually evoke a sense of nostalgia, reminding us of a simpler time.

Manuel’s should reopen in the first week of August.