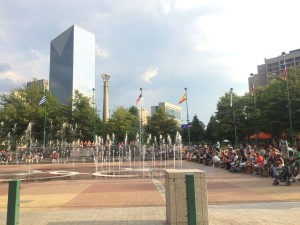 The Robert W. Woodruff Foundation has awarded $10 million towards the rejuvenation of Centennial Olympic Park. A $25 million fundraising campaign to improve the park will launch in January, 2016 ─ all in an effort to mark the 20th anniversary of Atlanta’s hosting the 1996 Summer Olympic Games.

The park, the most significant legacy from the Olympics, has become a new front door for Atlanta.

The park’s owner, the Georgia World Congress Center, wants to reinvest and refresh the green space that has transformed downtown Atlanta.

The $25 million  campaign includes the acquisition and demolition of the metro Atlanta chamber building and turning that into green space.

It also will create a new special events space and a new park’s maintenance facility next to the aquarium. Major entrances to the park will be more welcoming to visitors and residents. The amphitheater will be upgraded and expanded with a band shell, a stage and additional seating.

And perhaps most symbolic of all ─ Andrew Young International Boulevard will become a pedestrian plaza, connecting the Fountain of the Rings with the rest of the park all on one level.

The public will have a new opportunity to buy commemorative bricks that will be placed in the plaza’s pavement.

Ideally, the Georgia World Congress Center and the Atlanta business and philanthropic community will take this opportunity to highlight Atlanta’s Olympic legacy.

The Olympic exhibit could be moved to the park.  The flags of all nations that have hosted the Olympics since 1896 could decorate the green space.  And plaques could be placed around the park, informing people of the role the games played in Atlanta’s history.

Let’s be bold and creative as we begin to spruce up Atlanta’s front lawn.