“This is a sad day. We have another name to add to the roles. His name is Rayshard Brooks…. Another unarmed black man shot by police.” With these words, a Saturday morning virtual conversation about community development grew into one about effecting sweeping social change. 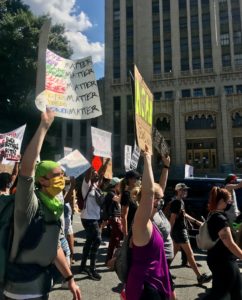 By the time the meeting ended, another set of words had been spoken and embraced by speakers and many in the audience of more than 100:

The first speaker was Deborah Scott, executive director of Georgia STAND UP, who cited Brooks’ death in a shooting Friday night by Atlanta police officers. The Georgia Bureau of Investigation is involved and has issued a statement. A video of the incident has gone viral on multiple platforms, including this version posted on tmz.com. The video was taken from inside a vehicle and, after police shots are fired, someone can be heard saying; “Hey, bro, we got kids.” Atlanta Police Chief Erika Shields resigned Saturday afternoon; the mayor accepted the resignation.

Robyn Bussey offered the second comment. She’s a community health strategist in Fulton County for ARCHI who cited what she sees as an emerging movement for reform, not just a moment of protest over a police shooting. 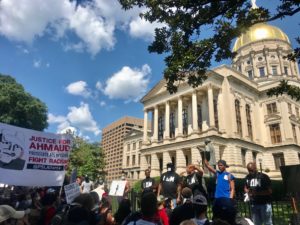 These comments were unusually frank for the setting: Neighbors Together 2020, the sixth annual program sponsored by Atlanta Neighborhood Development Partnership, Inc. with funding provided by Publix Super Market Charities and State Farm.

But these are unusual times.

Community building has taken on an entirely new meaning in the past four months, according to descriptions by some who spoke during the meeting.

The event fostered this type of pointed conversation, jettisoning the types of community development programs that resonated in the 2019 Neighbors Together event – Developing Your Inner Leader, and Building Strong Communities of All Ages, and Principles of Financial Well-Being, and How to Prepare for Today’s Job Market. 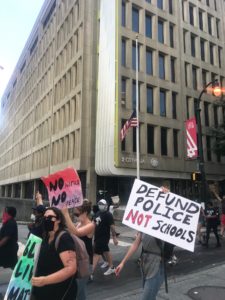 The call to defund police was voiced Saturday during a march in Atlanta, though it has been louder in other cities. Credit: Kelly Jordan

On Saturday, speakers described a social pendulum that began moving with the arrival COVID-19. It decimated jobs and health both physical and mental health, particularly among the nation’s poor and African American communities. The disease inflicted its greatest casualties on the nation’s black residents. Then, in May, the death of George Floyd, in Minneapolis, ignited repressed outrage over an incident that came to be viewed as the final insult.

The meeting began with a moment of silence, 8 minutes and 46 seconds, to commemorate Floyd’s death, which came after an officer was filmed with his knee on Floyd’s neck for that amount of time.

One of the comments that appeared to bring tears to the eyes of some panelists came from LaKeta Whittaker, a community advocate in the Pittsburgh neighborhood.

What to tell her 10-year-old son about Floyd’s death, and the video showing the policeman’s knee on Floyd’s neck, was the issue Whittaker addressed: 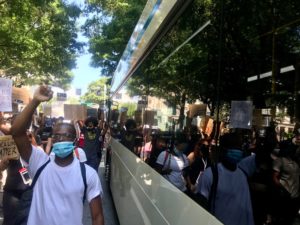 Whittaker said she consulted her son’s father. The two parents had already had what’s been euphemistically called the “The Talk” with their son – how to behave around police. The parents agreed to allow their son to view the video. Whittaker continued:

Note to readers: A video of the meeting is posted on ANDP’s Facebook page.