Braving the springtime heat in a funereal dark suit, Mayor Andre Dickens came to Oakland Cemetery on June 10 to pay respects, this time to the roughly 12,000 people buried in the African American Grounds, and to cut the ribbon on a five-year restoration of their final resting place.

The mayor opened with a joke about ghosts before saying the historic cemetery itself is very much “alive,” an institution that informs Atlanta’s status as the “heartbeat of a diverse America.” Oakland, he said, is where we, the living, are “still learning and growing from Atlanta’s complicated but very rich past.”

Saying he was right doesn’t do it justice. Here was a Black mayor of the South’s greatest city speaking amid graves of former enslaved people who fought for their communities’ freedom and security. Atlanta’s a young city where history is never far away to inspire – or haunt – and its connections to the present are often that obvious. The Civil Rights movement, arguably Atlanta’s finest historical era, had some leaders who are still alive today. 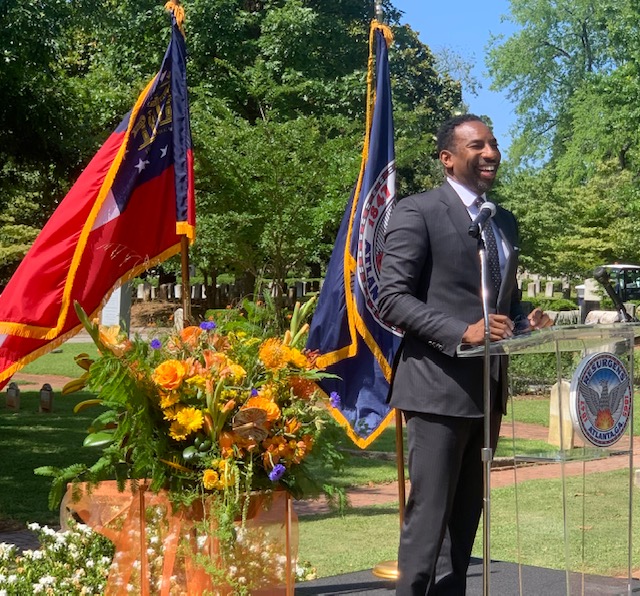 But cemeteries are a special way of remembering. They’re personal. Intimate. They’re a place where visitors walk the ever-shifting line between living memory and history. In the South in particular, they are also places to see inequity and inequality laid out even more starkly than the neighborhood lines on the city map.

Valerie Jackson, the spouse of the late Maynard Jackson, Atlanta’s first Black mayor, spoke at the ceremony about one of those geographic through-lines. The late mayor is buried at Oakland, not in the African American section, but rather in its once segregated original 6 acres. Valerie Jackson noted that some cemetery bricks still bear the fingerprints of the forced-labor prisoners who made them at the infamous Chattahoochee Brick Company, and contrasted that with the “14-foot obelisk” at her husband’s grave.

“History is why I chose Oakland Cemetery as Maynard’s permanent resting place,” she said, calling it both a “sacred space” and a “teaching entity.”

Kevin James, the president of Morris Brown College, recounted his visit to Oakland when he took on the daunting job of leading the school back from two decades of wandering in the wilderness after a disastrous financial scandal. James gestured to the nearby grave of Bishop Wesley John Gaines, who was born into slavery, illegally taught himself to read and write, and went on to lead Sweet Auburn’s Big Bethel AME Church and co-found the institution.

“I came to this cemetery and sat on that very bench there and meditated,” James said. He described the sense of Gaines speaking to him and telling him that if formerly enslaved people were capable of founding a college, he surely could resurrect it. “…I am here to proclaim that dead bones can live again!” he thundered.

Then again, some bones are better left buried — another lesson from the past touched on by District 5 Atlanta City Councilmember Liliana Bakhtiari. A stone’s throw from the African American Grounds is the Confederate section, a combination of Civil War graves and Lost Cause monuments that now includes historic markers to contextualize the propaganda elements. Bakhtiari praised the cemetery’s leadership for handling a “diverse, sometimes problematic history” with an approach of “not shying away from mistakes.”

Voicing another way history can inform the present, Bakhtiari said of the Confederate section, “I have no interest in waging war against dead men, but I have no problem making them turn in their grave.”

The African American Grounds are both product of and challenge to that historic racism and segregation.

The cemetery began in 1850 as a 6-acre parcel with a small, segregated area for Black people — virtually all of them enslaved — that went by the brutally dehumanizing name “Slave Square.” As the cemetery expanded — it’s now at 48 acres — about 800 Black people’s bodies were moved elsewhere into unmarked graves, probably in Potter’s Field, the area for poor and middle-class people who could not afford fancier plots.

The distinctly segregated African American Grounds (once known bluntly as the “Black Section”) dates to 1866. Its 3.5 acres has relatively few headstones and only one mausoleum, as the burials were often marked by ephemeral items like flowers and wooden crosses for both cultural and economic reasons. Still, many notable Atlanta figures have marked graves, such as Roderick Badger, the city’s first Black dentist, and Marie Woolfolk Taylor, co-founder of the influential Alpha Kappa Alpha sorority. And the section is not frozen in time — it’s still open for burials today, with a five-year wait list.

Richard Harker, executive director of the Oakland Cemetery Foundation, noted that leaders of the racist 1860s chose a “low-lying, flood-prone” area for the African American Grounds, part of a “systemic underinvestment” in the Black community. While the section has been treated more respectfully since then, the $600,000 restoration project, which began in 2016, was sorely needed. The work included repairing broken headstones and conducting a full survey of gravesites. 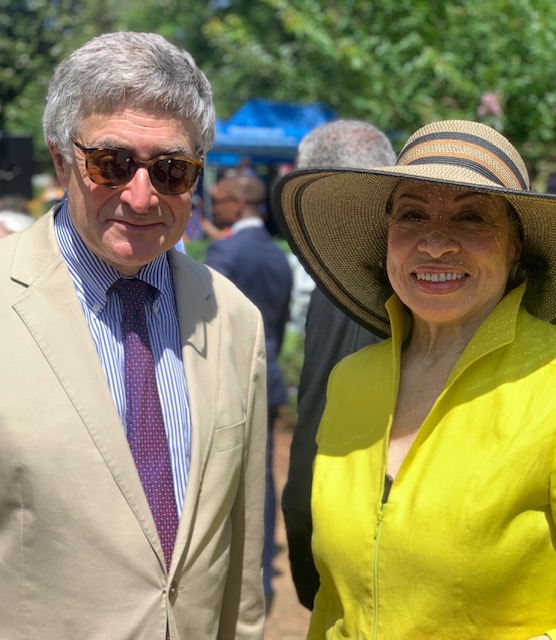 That work is done, but the foundation has more history in mind. Harker announced a new oral history project in collaboration with the Atlanta History Center and Sweet Auburn Works. The idea is to record the memories of people involved with major Black institutions like Big Bethel — whose choir performed at the ceremony — and showcase them in a new visitors center planned outside the main gate. “It will be an ongoing project,” said Jessica VanLanduyt, the foundation official in charge. (Members of the public are welcome to send her suggestions for folks to talk to at jvanlanduyt@oaklandcemetery.com.) Similar oral history projects for other sections of the cemetery may follow, Harker said.

There’s an even bigger context — the City’s “Atlanta Cemetery Network,” an effort to boost local preservation and restoration of the many historic burial grounds around town.

Sheffield Hale, president and CEO of the History Center, was in attendance at the ribbon-cutting and told me he agrees Oakland is “very much alive.”

“That’s the whole point about cemeteries,” he said. “They’re parks. They connect community to history.”

I thought about that after the ceremony as I walked the grounds, observing my own time-machine-style flickers between the past and present. On a history walking tour, I thought about how the African American Grounds would have been overshadowed by a 165-foot-tall cell tower in a secretive plan I recently revealed. That plan crudely referred to the cemetery as a “buffer” for the tower, and of course, the closest parts to it are where poor and/or Black people rest. I thought about how displacement, disenfranchisement and disrespect often don’t even end with death.

On my way out, I paid respects at the grave of Sam Massell, the former mayor I knew best, who died in March. I looked at his monumental headstone, emblazoned with a gigantic City “Resurgens” seal, and thought about the complications of history referred to by today’s mayor. A half-century ago, Sam was Atlanta’s first — and still only — Jewish mayor and smashed some segregation by hiring Black administration officials; but his failed reelection battle with Maynard Jackson was marred with racist appeals, leaving him the last white mayor to date and Jackson the first of a still unbroken string of Black mayors. Sam was a Buckhead exceptionalist, yet one whose final political battle was against the Buckhead cityhood movement and its ugly racism controversies. The final time I spoke with Sam, he talked about fighting that separatism with “power… that represents a cross-section of Atlanta.”

I thought about how cemeteries are built for the living as we take our turn in making the hard decisions on who to mourn and who to forget, on what to resurrect and what to leave buried.

Click here for Kelly Jordan’s photos from the event.