Our 2020 Leadership Atlanta class on Saturday traveled to Montgomery and Selma to confront the more sordid aspects of our nation’s shameful past and present – while asking ourselves the question civil rights leader Martin Luther King Jr. asked 53 years ago: “Where do we go from here?” 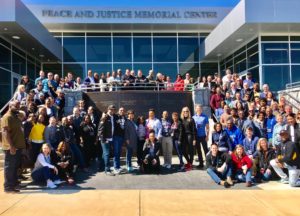 The trip was flawlessly organized by classmates Bernice King, CEO of the King Center; and Tameka Rish, vice president of corporate partnerships for the Atlanta Falcons, Atlanta United and Mercedes-Benz Stadium. Truist (formerly SunTrust) also helped cover the costs of the trip.

Three busloads of the Leadership Atlanta’s 2020 members with friends and family left Atlantic Station early on Leap Day for what was a truly thought-provoking, heart-wrenching yet magical experience. (Click here to see more photos from the journey).

As we rode down to Montgomery, we watched an amazing 1970 documentary: “King: A filmed record: From Montgomery to Memphis,” which set the ambiance for our journey.

First stop was the Legacy Museum: From enslavement to mass incarceration.

“It’s an old slave warehouse,” Bernice King told us before we went in. “If we are going to address systemic racism, we have to understand our roots.”

At the museum, we were brought face to face with the facts: 12 million people from Africa were kidnapped in the slave trade, and two million died at sea.

A blown-up replica of a Montgomery Advertiser and Gazette from 1854 had classified ads listing 117 slaves to be sold at an auction.

The museum also forces visitors to confront the horror of lynchings of African-Americans that occurred throughout the South and beyond. The museum states there were 4,000 documented lynchings that occurred in 12 Southeastern states, including 594 in Georgia (and 36 in Fulton County). 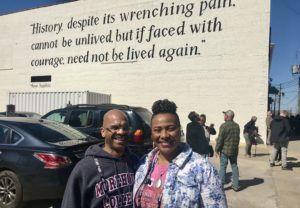 One panel at the museum boldly said that when lynchings began to decline in the 1920s, racial injustice moved indoors with the incarceration of millions of African-Americans and the execution or life imprisonment of thousands.

“In the 21st Century one in three black baby boys is expected to go to jail or prison,” a panel stated. “Today, more than 10,000 children are housed in adult prisons or jails; some 3,000 children are serving life or life without parole sentences.”

Near the Legacy Museum, there’s the Peace and Justice Memorial Center plus a somber six-acre sculpture exhibit of large metal memorials hanging from the sky identifying all the counties where the 4,000 lynchings took place.

Every one of those metal memorials have been duplicated so they can be put on public display in each of those counties. (Perhaps finding a home for the Fulton County memorial could be a class project).

Both the museum and the sculpture exhibit are the brainchild of Bryan Stevenson, founder of the Equal Justice Initiative, a private nonprofit organization founded in 1989 to help prisoners on death row as well as inmates serving life sentences. 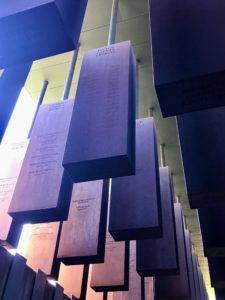 EJI and Stevenson have gained international notoriety with the book: “Just Mercy: A Story of Justice and Redemption,” which was been made into a movie released earlier this year.

(Before starting EJI, Stevenson came to Atlanta in 1983 to work as an intern with the Southern Prisoners Defense Committee – where he worked for more than four years).

Stevenson has become a highly sought-after speaker, and Bernice King was able to arrange for him to speak to our Leadership Atlanta entourage after we had toured the museum and the memorial.

“It’s no accident that this happened 50 years after my father was assassinated,” she told the group in her introduction of Stevenson. “Thank you for being so pure, so authentic and so real and for being a hero in our time.”

Stevenson explained why EJI needed to broaden its effort beyond the legal system to a more public discourse of the ongoing inequalities in our country.

“We are burdened by the smog of racial inequality,” Stevenson said. “I don’t think we can actually get free until we deal with the legacy created by this history.”

Stevenson admitted that after decades of working within the legal system, he was exhausted in his efforts to change the narrative towards freedom, justice and equality.”

“The beautiful thing about coming to Montgomery is there’s a history here that you can feel,” Stevenson said during our lunch visit. “These buildings once were slave warehouses.” 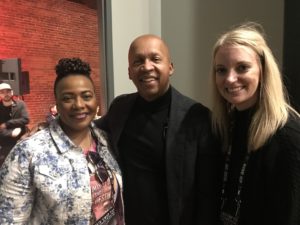 Bernice King, Bryan Stevenson and Tameka Rish before he spoke to the Leadership Atlanta 2020 class in Montgomery (Photo by Maria Saporta)

The museum and the memorial have sparked a development boom in Montgomery, with multiple new hotels, hundreds of thousands of tourists and a reviving downtown district.

Stevenson said he developed the attractions in addition to EJI’s work because of the need to create broader awareness of our nation’s past and present.

For example, as a nation we have put drug addicts in prisons rather than hospitals. The war on drugs was “misguided” – leading to the United States having the highest rate of incarceration in the world.

“We have created these institutions that have economic incentives to keep people in prison,” Stevenson said of private prisons. “We went from spending $6 billion in 1980 on prisons to spending $80 billion last year. We are spending so much on jails and prisons that we are not spending money on infrastructure.”

After his talk, Bernice King announced that the class of 2020 was making a $10,000 contribution to Stevenson – thanks to the generosity of the Atlanta Falcons and Truist/SunTrust.

We boarded the buses and headed to Selma so we could walk across the Edmund Pettus bridge on the eve of the 55th anniversary of Bloody Sunday. 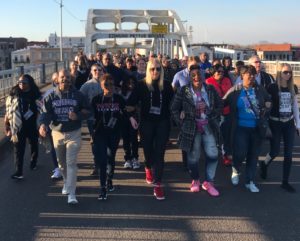 Our group’s connections managed to have the bridge closed off so we could do our ceremonial crossing – retracing the steps of our own John Lewis and countless others who risked their lives marching for voting rights of African-Americans. Civil rights leader C.T. Vivian, who lives in Atlanta, was one the most passionate voting rights advocates.

Once we crossed over and gathered to reflect on the experience, Atlanta Mayor Keisha Lance Bottoms appeared. She had been campaigning in Alabama for former Vice President Joe Biden, who is seeking to become the Democratic nominee for president.

“I wondered why we couldn’t get across the bridge,” Bottoms joked about her surprise to find the bridge had been closed for “all these Atlanta folks.” Then she turned to Bernice King and C.T. Vivian’s son – Al Vivian – and said: “Bernice and Al, the sacrifices you parents made have made our country better.”

After a catered Chick-fil-A meal, thanks to our classmate Andrew Cathy, we boarded the buses for our trip home – ending a serendipitous day.

In an email to the class on Sunday, Tameka Rish said divine intervention played a role in our journey.

“Too many things aligned and there was a spirit in our presence. From meeting with Bryan Stevenson to talking about the over population of our prisons in an escape room called Escapology to holding up the Mayor’s caravan in traffic…things aligned outside of our control,” wrote Rish, who ended with our class theme: “A vision of leadership; a vision of love.” 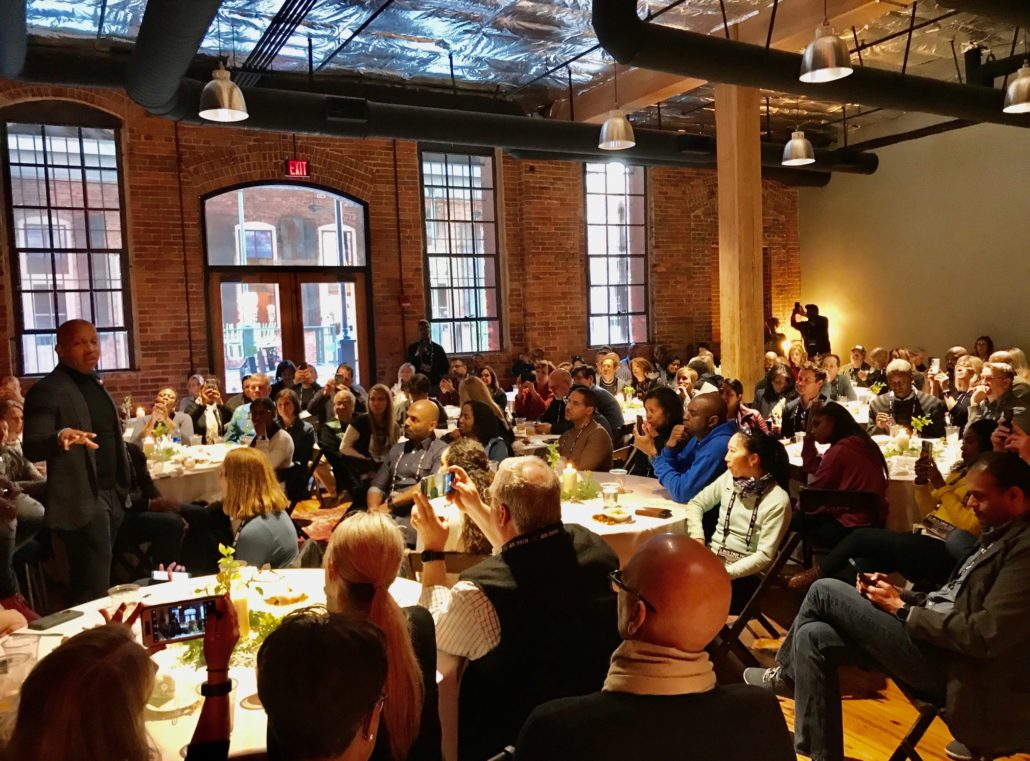 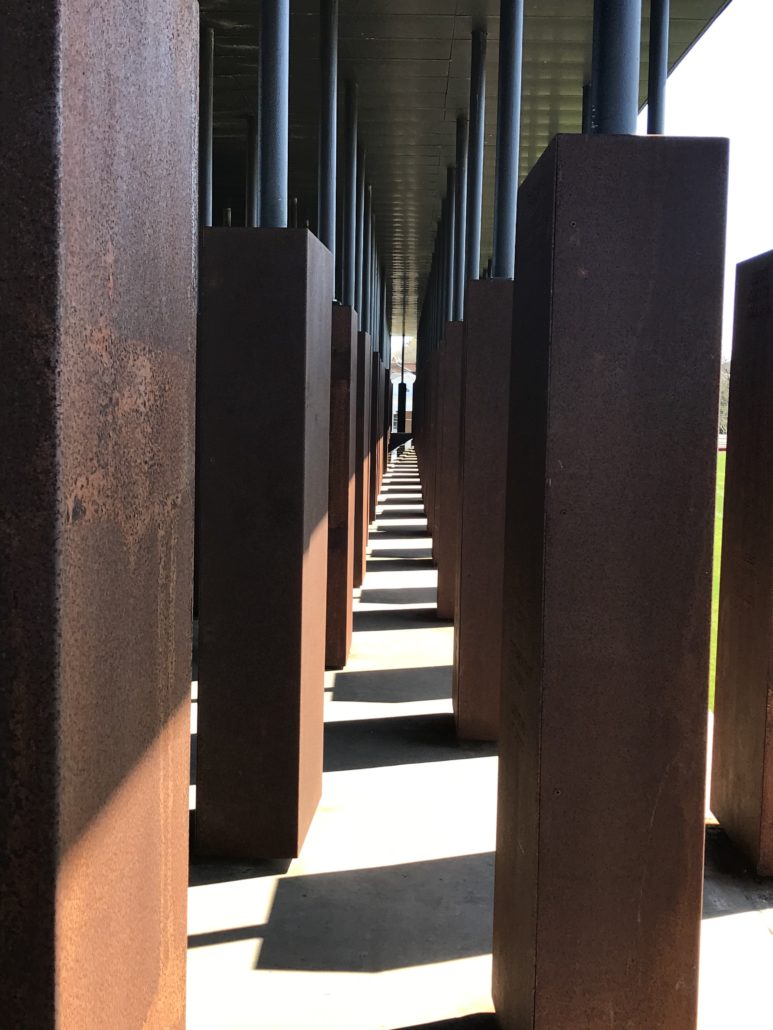 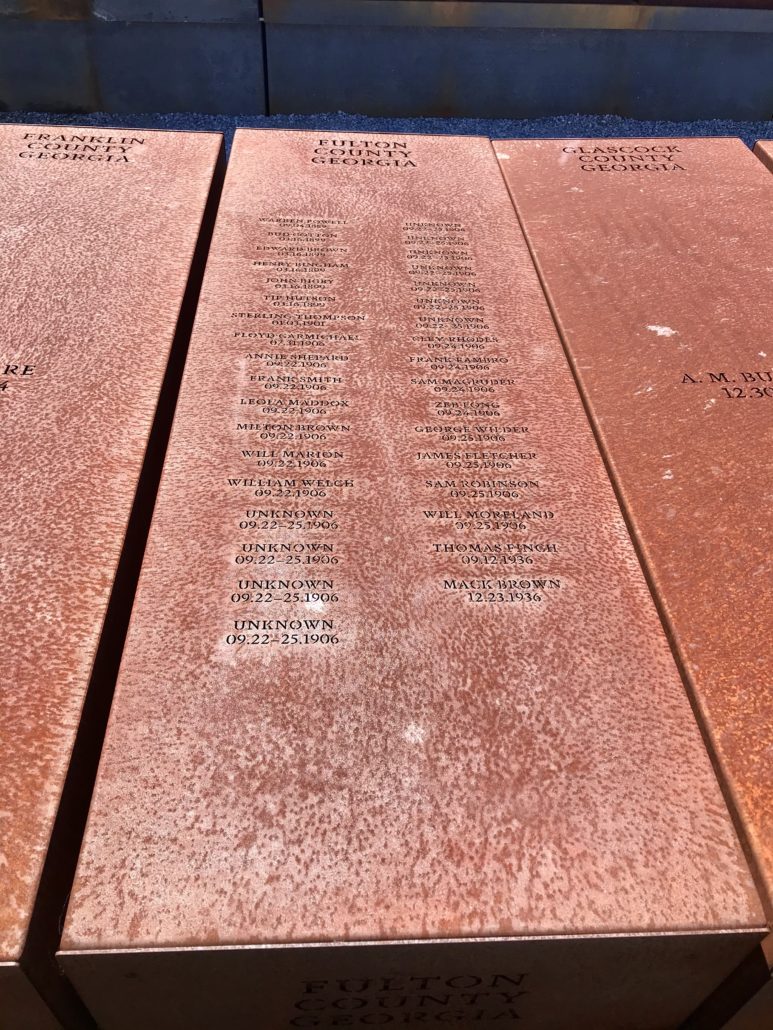 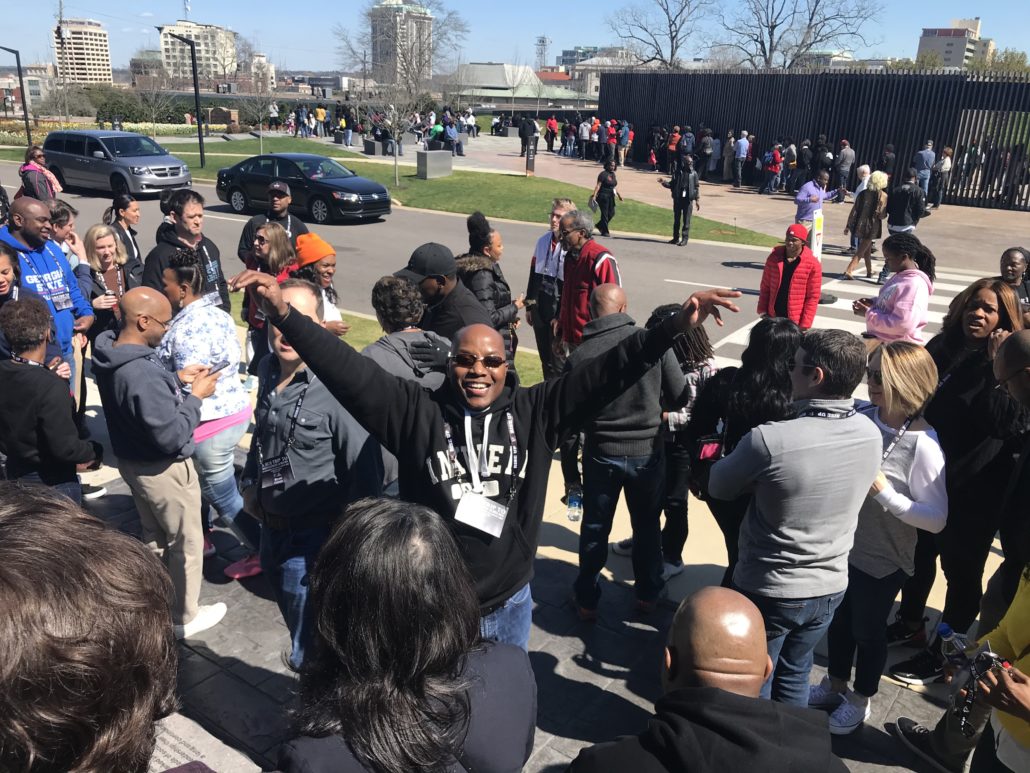 Eric Barnum, program chair for the Leadership Atlanta 2020 class, raises his arms in Montgomery after getting the class to recite: “A vision of leadership; a vision of love” (Photo by Maria Saporta)

Previous Article
Emory hub aims to spur health care innovation
Next Article
Are we so bad, after all? What lists can tell us and what they can’t