Two business leaders will be named “Georgia Trustees” June 5 in an annual award given by the Georgia Historical Society and the Governor’s Office.

David Abney, a former CEO of United Parcel Service of America, and Juanita Baranco, co-founder of Baranco Automotive Group, are this year’s honorees. 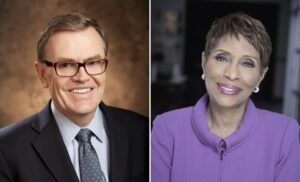 The original Trustees were the governors of the colony of Georgia, a group appointed by England’s King George II in 1732 that operated under a Latin motto translated as, “Not for self, but for others.” The “Trustees” term was revived in 2008 by GHS for an annual award at a gala that follows the Georgia History Festival, an educational program for K-12 students.

The “Georgia Trustee” award, according to GHS, is “a way of recognizing modern-day Georgians whose accomplishments and community service reflect the high ideals of the founding body of Trustees.” Honorees have largely been corporate and institutional leaders, along with such figures as baseball great Hank Aaron, University of Georgia football coach Vince Dooley and former U.S. Sen. Sam Nunn.

Abney is also a former chair of the Metro Atlanta Chamber and past executive chairman of the board for Sandy Springs-based UPS.

Baranco and her husband Gregory co-founded Buckhead-based car dealerships that were among the first owned by an African American woman. She continues to act as executive vice president and chief operating officer of the business. Baranco is also an attorney who previously served as a Georgia assistant attorney general. She is a former chair of the Georgia Board of Regents, which oversees the state university system, and has served on many corporate boards.

Gov. Brian Kemp will induct Abney and Baranco into the “Georgia Trustee” list at a June 5, 8 p.m. ceremony that will be shown on the GHS YouTube channel and Public Broadcasting Atlanta.