Editor’s note: This story has been updated to remove the dates of Samuel Spencer’s life.

Cousins Properties has succeeded in its call for the swift removal of a statue of a Confederate cavalryman who later was the first president of a predecessor of Norfolk Southern Railway. The statue is at the gateway of the building in Midtown Cousins purchased from Norfolk Southern. 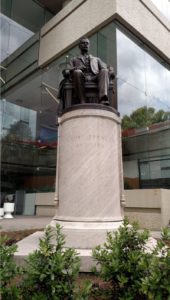 This statue of the founding president of Southern Railway, a precursor of Norfolk Southern, is to be removed and stored because Spencer had served in the Confederate Army. Credit: Bcballard via wikimedia.org

Norfolk Southern has agreed to pay the cost of moving the statue of Samuel Spencer and storing the statue, indefinitely, until Atlanta decides its fate. The city owns the statue. For now, the statue is headed to a warehouse in Lilburn, according to legislation slated for approval April 19 by the Atlanta City Council.

The statue had been a source of Norfolk Southern’s corporate pride since the statue was moved in 2009 from Downtown Atlanta to the Norfolk Southern offices, overlooking Peachtree Street on a site near the High Museum of Art. The bronze statue was paid for with donations from 30,000 company employees and the design team and sculptor, Daniel Chester French, used a similar motif in their statue of Abraham Lincoln in the Lincoln Memorial on the National Mall, according to a report by Atlanta videographer Lance Russell.

Given that the memorial was unveiled in 1919, it qualifies as a “Jim Crow Era” monument that was, “Erected in order to reinforce white political and social power [and it] Advanced Lost Cause mythology,” according to the 2017 report of Atlanta’s “Advisory Committee on City of Atlanta Street Names and Monuments Associated with the Confederacy.

The railway has since consolidated its corporate structure to Atlanta, from Norfolk, in a new headquarters on West Peachtree Street.

Cousins, acting through a subsidiary, Cousins 1200 Parent LLC, is pushing for the statue to be removed as quickly as possible, according to legislation pending at Atlanta City Hall:

The statue is in imminent danger, according to the legislation: 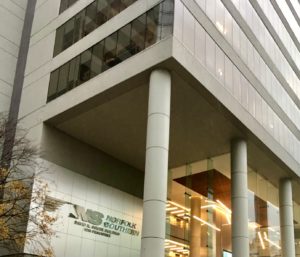 Norfolk Southern has offered to pay to relocate and store the statue of the first president of Southern Railway, who had served in the Confederate calvary, at the behest of Cousins Properties, which purchased the railway’s former building in Midtown. Credit: Kelly Jordan

The push to remove the statue from public view follows a controversy over Norfolk Southern’s expansion plans in northwest Atlanta at the former Chattahoochee Brick Co. The factory was owned by a former Atlanta police chief and mayor, James English, who used hundreds of leased convict laborers, most of them Black men, to make bricks. Norfolk Southern announced Feb. 18 it was dropping plans to build a transfer facility at the site.

Cousins has a legacy of influential leadership in Atlanta.

Philanthropic work includes that of Larry Gellerstedt, who served as executive chairman of Cousins’ board until 2020, and previously served as CEO and president from 2009 to 2019. Gellerstedt served on the city’s Confederate Advisory Committee, and now serves as vice chair of the Robert W. Woodruff Foundation, which reported in 2019 assets of $721 million, according to guidestar.com; chair of Grady Memorial Hospital Corp.; and on boards including Georgia Power and Metro Atlanta Chamber, according to reports including bio on the Woodruff page.

The Atlanta City Council’s Finance/Executive Committee voted unanimously Wednesday to accept Norfolk Southern’s donation of the cost of moving and storing the statue. The cost was not specified in the legislation.

The statue honors Samuel Spenser, who served 12 years as the first president of Southern Railway. Spencer appears to have been a business dynamo of his era. An abstract of Spencer’s papers at the University of North Carolina observes he was: “president of six railroads, including the Baltimore and Ohio, 1887-1888, and the Southern, 1894-1906. He was a director of at least ten railroads and of several banks and other companies.”

Spencer also was in the Confederate Army and the son-in-law of Confederate Brigadier Gen. Henry Lewis Benning, a Georgia Supreme Court justice and namesake of Fort Benning, located near Columbus.

The UNC collection of Spencer’s papers includes his work with: