A garden gate by Andrew T. Crawford is a frame of beauty and a joy of metal.

It’s also a sign of the artist’s mid-career transformation. 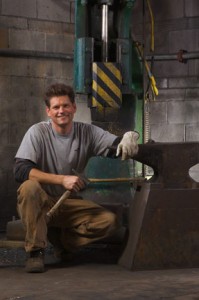 Eleven of Crawford’s organically inspired gates frame the daffodils, tulips, hyacinths and more in the current exhibit, “Atlanta Blooms: 300,000 Watts of Flower Power” at the Atlanta Botanical Garden, through April.

The gates, a successful attraction at the State Botanical Gardens in Athens, will likely tour other cities after Atlanta. Each sells from $12,000 to $30.000.

Crawford is not just about transforming steel into art, but about pushing his internal limitations – the voice that told him to just make what others would buy.

At age 40, he instead began to forge what only he could as a metal sculptor.

The tools were the same; the mentality was not.

“My whole career, I worked hard on my craft of blacksmithing and thought of my sculpture as my art,” said Crawford, a graduate of the Rhode Island School of Design, of the objects he made on the side for himself.

“It me like a ton of bricks one day: I was getting better, and blacksmithing was my art. It wasn’t separate. I turned 40 years old and realized that I needed to embrace my craft as my art. Because of that freedom, I’ve done more honest work and met with more success. I should have learned a long time ago that if you make stuff you believe in, people will buy it.” 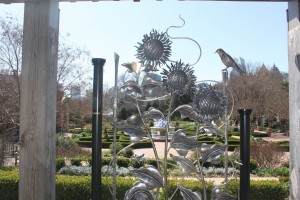 The Sunflower Gate is a signature piece for Andrew T. Crawford. (Photos of gates courtesy of Atlanta Botanical Garden).

That “art vs. craft” epiphany led Crawford, who turns 42 this week, to take preliminary sketches of gates that he loved, and knew he could make, and pitch the idea to the State Botanical Garden.

He still gladly accepts commission work; the successful installations have given him a multidimensional view of himself as his own career sculptor.

He spoke about reinventing himself by taking risks  – and what goes into his gates to make them such unique outdoor passages.

Q: How did you become enamored of transforming everyday objects into art – like the tools that inspire your Tool Gate?

ATC: One of my theories is that if you are listening to the radio and hear a song you know, you will stop changing the channel. Even if you don’t really like the song – if you simply recognize it – you will take a minute to listen to it. I employ that theory in artwork. If it’s a pencil that’s been mutilated, regardless of you r level of art awareness, you will take a minute too look. That accessible quality in my work has allowed me to be commercially marketable. Success is not the best word, because success in art is whether you get the point across.

Q: How did your business grow?

ATC: In the fall of 1993, people started hiring me to make coffee tables and candlesticks. I made my first gate for my parents’ back yard. They like it, but it’s not very sophisticated. I can see that I was working on something that I just didn’t have yet. I wasn’t pushing my material, claiming my connections – I wasn’t aggressive enough. Their gate reminds me of where I started and from that I can gauge where I am now.

It was a creative way to pay my rent, and my family has been very supportive of my career. That’s a huge help when you are an artist.

Q: How many gates did you make before you started making the ones you love? 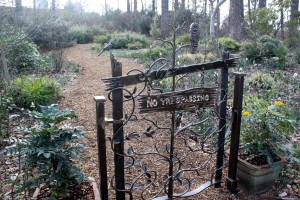 The Bird Gate incorporates birds that would be found together.

Q: How were the newer ones different?

ATC: I had made tool gates before (that show hand tools) but this one was going to be the most bad [bottomed] tool gate ever. I made it exactly the way I wanted to, and it felt really great. Same with the sunflower gate and corn gate. The bird gate was designed with Dr. Bob Cooper, a University of Georgia ornithology professor. He told me what kind of birds would be found together.

ATC: A gate is like an open palette. It’s space I can fill however I want. One beautiful thing, unlike a painting on the wall, is that you can see through a gate. What makes it beautiful is its setting. The gate functions as its own world. You can see beyond it or in front of it….

The metaphor for a gate is that it is a passage.

Q: How long do they take to make? 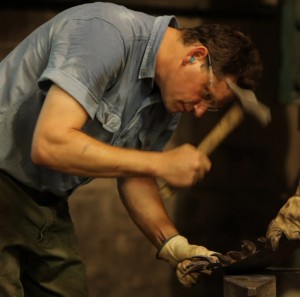 Q: Your work sounds like it could be dangerous.

ATC: We use a furnace or hand-held torch, with the heat between 1,000 to 1500 degrees. I burn myself a lot but don’t consider that an injury. People burn themselves in a kitchen a lot more than in the blacksmith shop.

I have had some really bad injuries. I had my left hand caught in a machine that rolls and squishes circles out of straight metal, and I crushed three fingers that had to be reconstructed. It was so scary and still bothers me – not the injury but the fear and pain of it.

About four to five years ago, I got hit in my face with an electric grinder, and had 40 stitches in my face. The scar goes under my right eye to the right corner of my mouth.

Q: What risks did you take in exhibiting your garden gates?

ATC: I had to convince the State Botanical Garden that I could put together a good show, even though I was asking them to do something they had not done and neither had I. I had some drawings, but I had to shoot from the hip.

By the time I asked the Atlanta Botanical Garden for the show, I put all I had into the gates physically and financially. I felt strongly about using this opportunity for all it was worth. I really stretched my company as far I can to get the gates to the level that they were. I wanted people to feel like they were looking at the best example of modern blacksmithing anywhere.

Q: You already had an “in” at the Atlanta Botanical Garden. 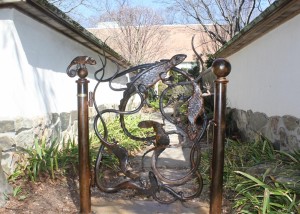 The Lizard Gate is an example of years of Crawford's blacksmithing craft evolving into art.

ATC: I had done some iron repair. For example, we are working on a fountain there now, a water wall with brass plates that the water shoots up against, and the water erodes the back of the plates.

That’s what’s cool about being in metal work. I can make beautiful gates and monumental sculpture, and you can call me to fix a Dumpster for a $100 bill. I have to tell you, both scenarios are equally awesome.

Q: Are the gates selling, and is that important to you?

ATC: The idea was to have a traveling show with 6 to 10 pieces and support those with a gallery of drawings, lectures and talks. Hopefully you sell a couple of them, but what you are really doing is introducing yourself to a community that appreciates gardening and fine things. The challenge is to find them without advertising in magazines, and the way to find them is to get this show in front of them.

So far, it’s working, because I have sold a few, have gotten a lot of contacts and hope to get some commissions.

Q:  One of your websites is www.ironisking.com. Explain that slogan. 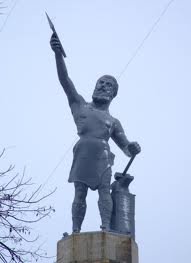 The Vulcan statue in Birmingham carried the slogan, "Iron is King," when it was exhibited at the 1904 St. Louis World's Fair.

ATC: When I was in Birmingham, I was at the Sloss Furnaces, which was an awesome company… Sloss was a great example of a forward-thinking, progressive employer.

When the Vulcan statue was made – the statue that stands over the city of Birmingham – he went to the 1904 St. Louis World’s Fair, and his anvil had a stripe around it that said, “Iron is King,” I took that on as my own. It’s almost like a high-five, like a catchphrase or a one-liner.

Q: How did you get into metal work?

ATC: I was figurative clay guy, into abstract form and really classical materials like stone, wood and clay. In hindsight, I was a very conservative artist. I didn’t understand why anyone would make something out of metal.

When I got to RISD, and had to make something out of metal, I thought about ways to work and cut and bend and form it and put it back together, and about the scale you can achieve. You can work with metal cold or hot, polished or textured – it employs qualities of every other medium.

I was 20, and not a day has gone by when I haven’t thought about it. Even when I go on vacation, I have my sketchbook or a book about metal or sculpture. 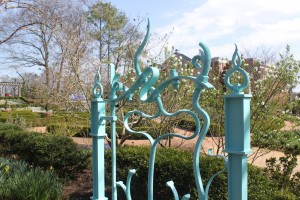 The Threaded Bar Gate shows what painted steel can look like.

Q: What materials do you work with?

ATC: I work with all different types of metal: aluminum, copper, brass, bronze but we are predominantly steel.  We can rust it or blacken steel, or paint it – we get a lot of variations on our surfaces. Steel is so versatile — it’s the miracle metal.

I am learning why no one make stainless steel gates, because you have to rip them apart, polish them and put them back together – and make sure the gate doesn’t rust. It’s expensive. In some way, all that expense is empowering because I am doing something that no one else is going to do.

ATC: Everybody in the worlds uses metal, and breaks things or wears things out that are made of metal. I swear that if the world came to an end, I would still make a living.

Q: Did you have any mentors for your transition?

ATC: My father, John Crawford, switched the way he did business when he was 40. He opened Crawford Investment Counsel at that age, and from him what I learned is that you can change how you do something without changing what you do. Because of that freedom, I’ve done more honest work and met with more success.