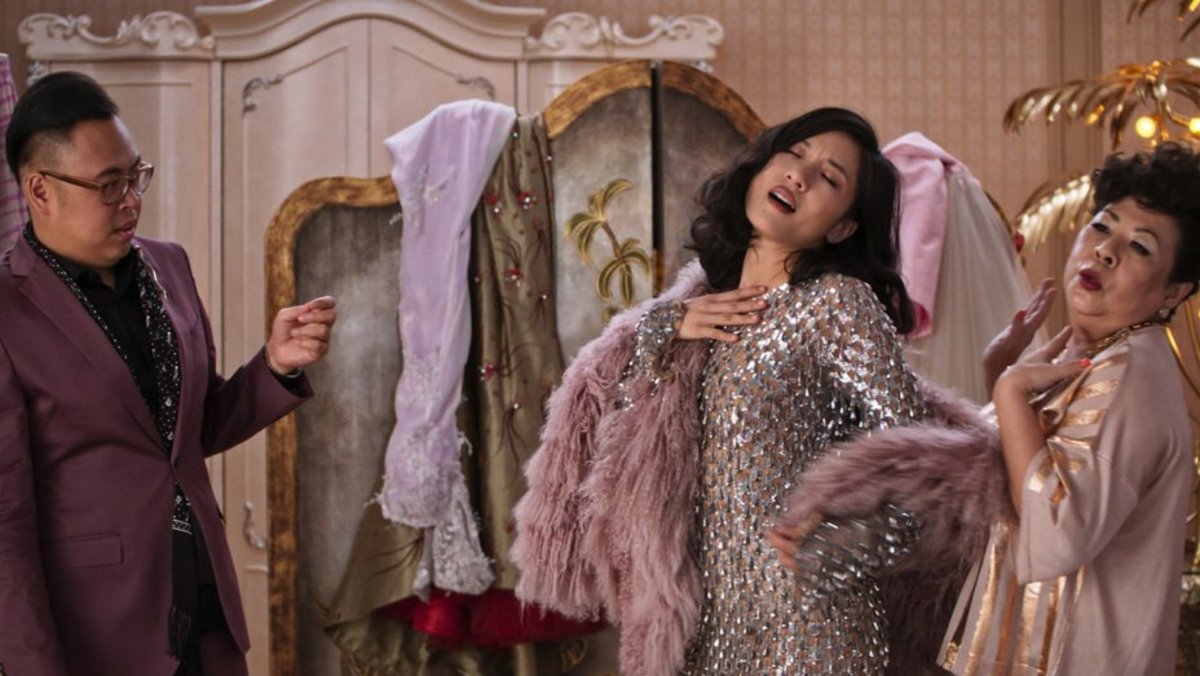 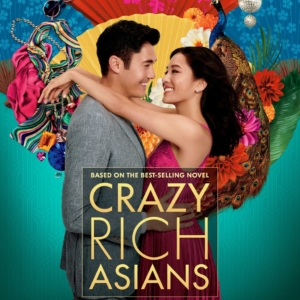 Everything else. The plot, the characters, the dialogue….

With its putrid petri dish of obnoxious gender stereotypes, this thing could’ve been released in 1961.

Rachel (Constance Wu) is a bright young Chinese-American who teaches economics at NYU. She’s also nice, funny, adorably human. Perhaps someday someone will make a decent movie about her.

She’s also in a relationship with Nick (Henry Golding) who is nice enough, funny enough, human enough. He is also Chinese Chinese, i.e., not brought up on America, which, we soon learn, makes a difference. As does the little matter of his family wealth, which, well, puts him in the Crazy Rich Asian tax bracket.

But to begin with, things are going swell. “What about us taking an adventure East,” he suggests one evening.

Try Singapore where he grew up and he’s been asked to be best man at his oldest friend’s wedding.

Less happily, so does Nick’s extended family, ruled over by his dominating mother, Eleanor (Michelle Yeoh) who takes one look at Rachel and, well, isn’t amused.  Neither is the small flotilla of would-be Mrs. Nicks, all of whom behave like Mean Girls, Yellow Peril Division (Sorry, but the movie does deal in this level of cliché).

So there is stress and strain and hurt feelings and misunderstandings and even a Say Yes To The Dress segment. The only sympathetic characters (aside from Rachel) are Nick’s gay relative who, by now, is such an insulting cliché that, even though he’s presented sympathetically, he makes your teeth hurt, and Awkwafina who, as one person says, came back from four years in America as “Asian Ellen” (as in DeGeneres). 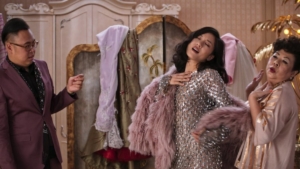 A scene from “Crazy Rich Asians”

The movie has that built-in “Lifestyles of the Rich and Famous” allure (RIP, Robin Leach), but that can only take you so far. Though it tries to tsk-tsk so much lavish display, the movie also revels in it. It’s that kind of picture.

As for the cast, though she doesn’t make a false step, Wu is nonetheless totally wasted.  So is Yeoh. One of the most elegant and charismatic actors around (remember “Crouching Tiger, Hidden Dragon”), she’s been reduced to a clumsy Dragon Lady cliché.

Conspicuous consumption with a dollop of old-fashioned (very old-fashioned) romance has almost always worked at the movies. There’s nothing inherently wrong with it except…well…except…that it’s so damn stupid. And annoying. And, well, retro (and not in a nice way).

Part of me drifted through “Crazy Rich Asians” almost in an opium dream. Ah, isn’t that pretty. Ah, isn’t she pretty. Ah…. But then something in me would wake up, and I’d find myself going, Ah…isn’t that….wrong? And maybe just a bit icky?