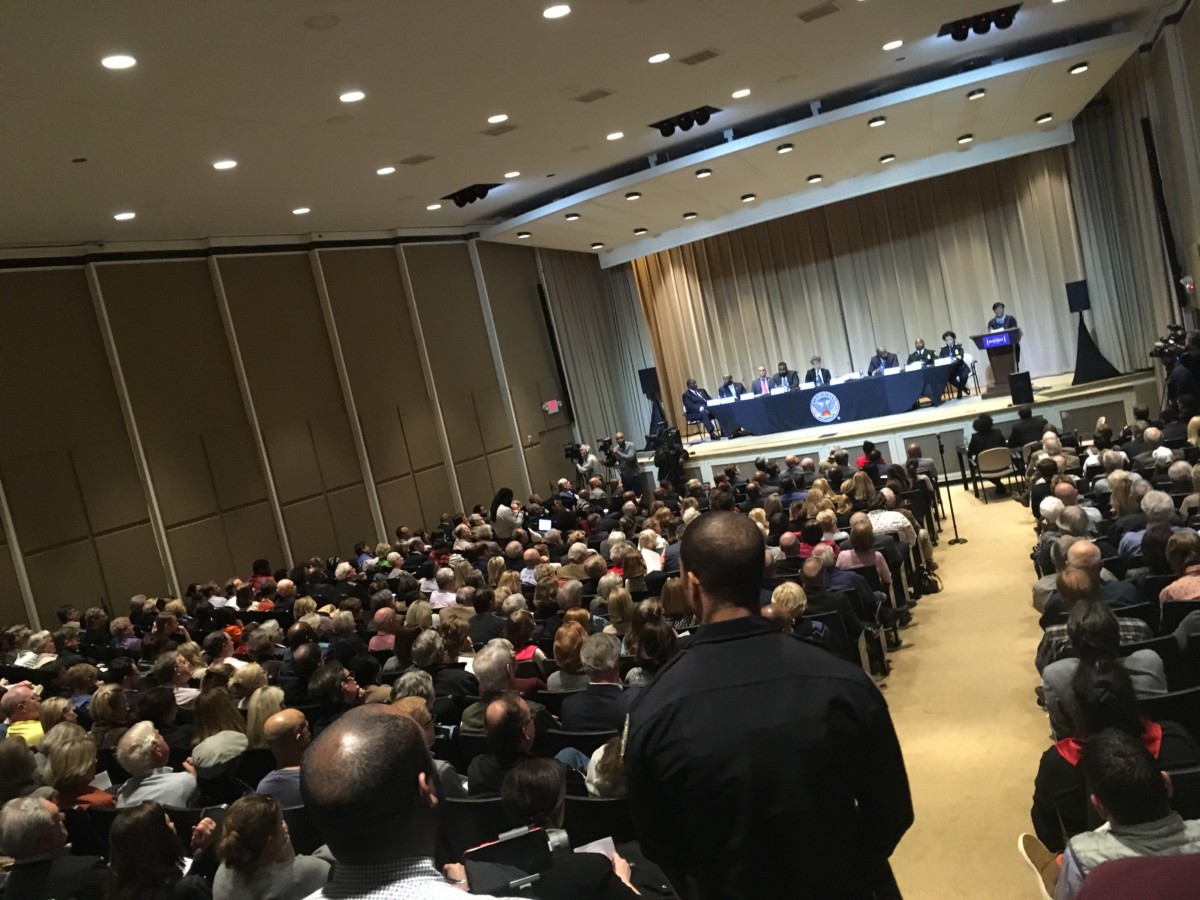 Enough people wanted to attend a town hall meeting with Atlanta Mayor Keisha Lance Bottoms on Thursday night that public safety officers had to close the doors after about 400 or so people came in. Those in the crowd had a lot of questions — many about crime and roads.

Jackie Murphy was one of the last people to get in the hall at the Atlanta History Center and she wanted to hear from the mayor about crime. Murphy said she does not feel safe, pointing to break-ins at houses, theft from cars, carjacking. At a restaurant recently, broken car window glass in the parking lot made her turn around and leave.

“I’m a huge Atlanta fan. But I’m not sure if I want my daughter to move back here,” Murphy said. 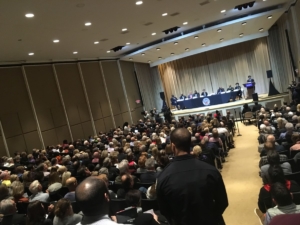 For something near 90 minutes, Bottoms and some of her top staff took questions and comments from the audience — mostly from written cards. About a dozen questions were in the same vein as Murphy’s concerns: from people who don’t feel safe, who don’t feel like there are enough officers, that officers aren’t paid well or that those officers aren’t being sent to northside neighborhoods.

Late last year, Bottoms and Atlanta City Council approved police raises that will amount to about a 30 percent increase in pay, phased in over three years.

Atlanta Police Chief Erika Sheilds also took many of the questions. And Shields repeated what she’s often said: “These crimes are not being prosecuted.”

Shields said that police arrest some of the same people over and over and over, but those people don’t stay locked up.  She asked the people in the audience to help “close the gap” in the criminal justice system by watching judges and the district attorney.

But the police chief also said “it’s no secret” that the city has struggled with Buckhead crime and gave some updates. The city’s started an auto crimes task force and officers have started to learn to use a “pit maneuver” to stop other cars in some situations by hitting them in the bumper.

She also said two beats will be removed from Zone 2, the northernmost police zone, which reaches south to Morningside and the CSX yard in northwest Atlanta. One of the difficult things about Zone 2 is that it’s large and has so much traffic — making it smaller should decrease police travel time.

About one in three reported Atlanta car break-ins this year has occurred in Atlanta’s Zone 2, according to Atlanta police stats for the year through February 28.

There’s no question that Zone 2 is a hotspot for some kinds of property crimes. By contrast, only one in 10 reported aggravated assaults happened there.

Shields said crime has gone up in previous years. And she said that she knows that when people and their neighbors are crime victims, they don’t care what the statistics are — but that as a police chief, she has to measure things and see if her policing is effective.

“What I’m proud to say today, two months in, is we are down five percent,” said Sheilds, who had to pause for the applause.

Maybe a dozen or so of the other questions or comments were on the roads in some way: complaints about potholes, speeding near homes, traffic, traffic and traffic.

More than 16,000 potholes were filled last year, Bottoms said, up from something more than 2,000 the year before that.

“If there is a pothole that you have a concern about … please call 311,” Bottoms said.

Lex Wells was also nearly one of the last people to squeeze into standing room at the back of the history center hall.

She said she doesn’t feel safe either.

“The only thing slowing down the criminals are the potholes,” Wells said.