I guess you could say I didn’t much care for it.

Disney has been “live-actioning” its treasure trove of animated classics for several years now. Some are harmless (“Beauty and the Beast”). Some are so-so (“Cinderella”). Some are superfluous (“The Lion King”). Some are repulsive (“Dumbo”). One was actually brilliant (“The Jungle Book”). 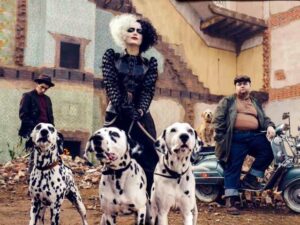 A scene from the “Cruella” movie

Like “Maleficent” (so-so), “Cruella” is a prequel of sorts. It purports to show us how the puppy-skinning madwoman of “101 Dalmatians” got that way. As if anyone, including your average puppy-loving kid, cared.

So, the greedy stone-hearted execs at Disney came up with what is known in the industry as an origin story. Cruella – she of the memorably bifurcated hair and razor-edged cheekbones – was once just a sweet orphan in the punk-rock ‘70s that was London. When she was still a kid (Tipper Seifert-Cleveland), her mum was killed by a trio of mean-tempered Dalmatians belonging to a heartless fashion guru so famous she’s known as the Baroness (Emma Thompson).

After a phase as a slippery street-smart urchin, the fashion-mad Cruella (Emma Stone) scores an apprenticeship with the very same Baroness. And ultimately beats her at her own game (translation: the film becomes a skeletal clothes-horse on which to hang loads of outrageous glam-rock fashion). 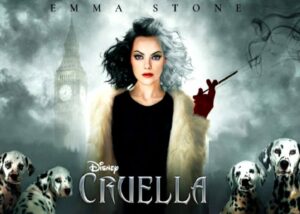 What all this has to do with becoming a puppy-hating hag, I’m still not sure. And let’s not forget – please – the original Cruella didn’t just dislike puppies; she wanted to kill them, skin them and turn their distinctively spotted coats into a fashion statement.

That’s the nauseating plot point beneath “Cruella’s” over-designed posturing that all the imaginative design in the world can’t make up for it. It’s like finding out that David Bowie liked to suck the marrow from kitten bones. That the director is Craig Gillespie, who made the darkly entertaining “I, Tonya,” only adds to the disappointment.

Except, “disappointment” isn’t nearly a strong enough word. Disgust is closer.  Or maybe puke-inducing. Or…

As I said, I didn’t much care for the movie.

“Curella” currently is in theaters and is available on demand.

Previous Article
Unplug, Reconnect this Summer with the Return of Arts Events in Midtown
Next Article
Taking a community approach to workforce development