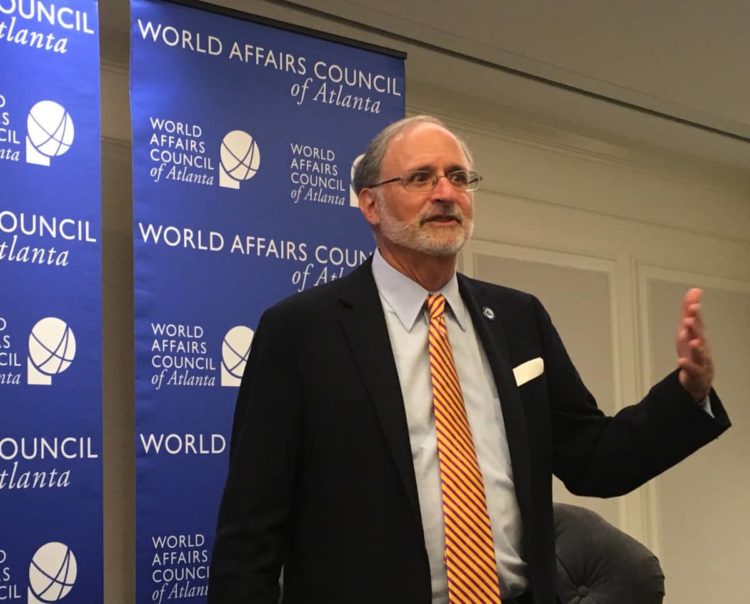 Charles Shapiro, president of the World Affairs Council of Atlanta, told an Atlanta audience on Wednesday that President Donald Trump has set a new "tone" in U.S. policy toward Cuba, but not a lot of policies have changed. Credit: Maggie Lee

In a high-rise office in Midtown on Wednesday night, a former ambassador had some fairly good news for folks with immediate travel plans to Cuba. But for people and businesses with Cuba-related plans a little further out, Charles Shapiro suggested a look back to the past and some uncertainty.

About two weeks ago, President Donald Trump announced — on a stage in Little Havana in Miami — that his administration will tighten individual travel to Cuba and cut U.S. business dealings with the Cuban military. 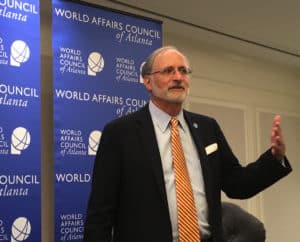 Charles Shapiro, president of the World Affairs Council of Atlanta, told an Atlanta audience on Wednesday that President Donald Trump has set a new “tone” in U.S. policy toward Cuba, but not a lot of policies have changed. Credit: Maggie Lee

Trump’s goals are similar to those of former President Barack Obama, according to Shapiro. That includes liberal changes like free, multiparty elections in Cuba.

“It’s how do you get there,” said Shapiro, who’s a diplomat with a long resume, including as U.S. Coordinator for Cuban Affairs. He’s now president of the World Affairs Council of Atlanta.

The Obama administration’s tone was that it wanted to work with Cuba despite differences, Shapiro said, whereas Trump is taking a hard-line tone.

But Shapiro also said that overall what’s changed, “in fact, is not a whole lot.”

Trump’s announcement doesn’t change Washington’s resumption of diplomatic relations with Cuba, said Shapiro. Nor does it change the fact that, save some exceptions, there’s still a U.S. trade embargo on Cuba.

Federal agencies are now working on updating rules for travel in line with Trump’s policy. The U.S. Department of the Treasury has already said cruises will be allowed. Shapiro said he thinks the rules could be ready as early as September.

Until the new rules are out, travellers like Contessa Clark can go to Cuba under the Obama administration rules. Clark was front and center in the crowd of about 70 at the Council event in Atlanta, just days before a scheduled trip to Cuba.

“I was very curious to know what the stipulation on Cuba is going to be and anything that I needed to prepare for as I go there,” said Clark.

She said she wants to see Cuba get to democracy and she wants independent Cuban businesses to thrive.

“I do believe that the United States can help and aid in that change if our country and our administration is open to it,” she said.

Clark said she’s taking what’s called a “people-to-people” trip. Those trips require U.S. visitors to the island to participate in some kind of cultural or educational activities and meet normal Cubans. When the Obama administration loosened those rules, Americans headed to the island for something that looked a lot more like tourism.

“What I suspect they will do,” said Shapiro, “is go back to something approaching what the [George W.] Bush administration had, that you had to be able to account for your time, how you spent your time, that it really wasn’t tourism, that you really were meeting and talking to … ordinary people about their lives.”

Shapiro took some questions from the audience, including one about the prospects for doing business in Cuba, or those companies that have already signed contracts.

The former ambassador said he suspects already-signed contracts would be grandfathered in under new rules.

But as for new business that’s not OK under the embargo?

“They should be very cautious,” he said.