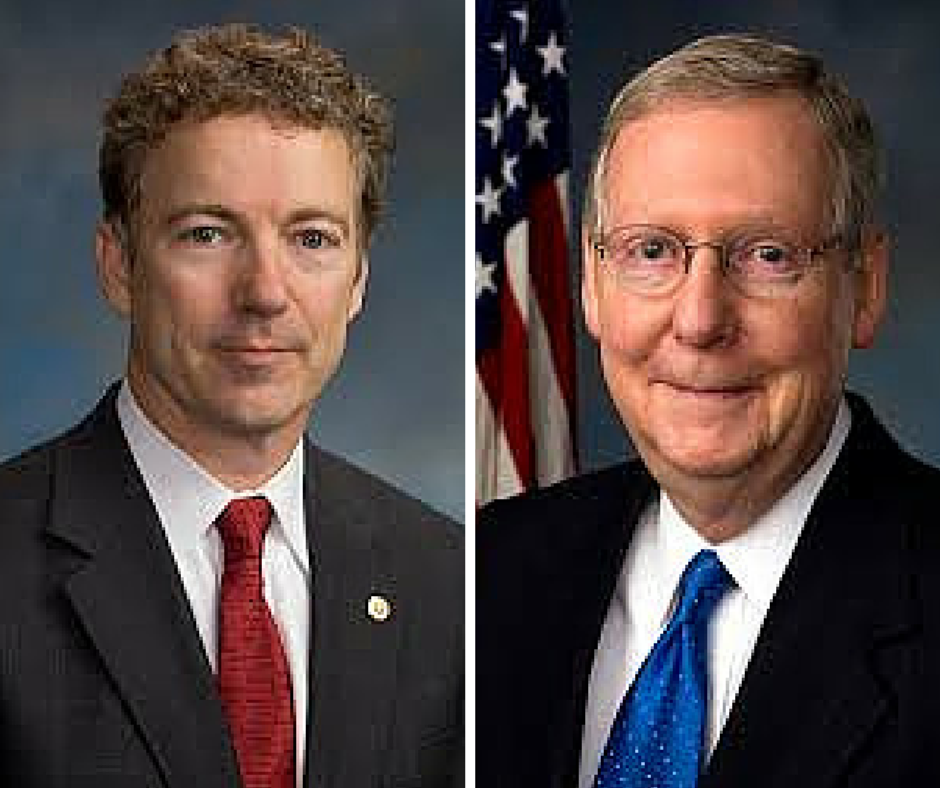 They are Washington’s new odd couple: Curly and Mo, companion senators from the Bluegrass State with conflicting ideas about what, in political terms, defines red.

With bigger fish to fry, Mitch McConnell, the new Senate majority leader, and Rand Paul, the presidential candidate, have worked to paper over their doctrinal differences this year. McConnell has endorsed his fellow Kentuckian in the presidential race, just as Paul was loyal to McConnell in last year’s Senate race.

Their relationship has had all the deep authenticity of morning news anchors making nice to each other, but it was holding together fairly well until this past weekend, when Paul made a stand over the Patriot Act.

Paul kept the Senate in session until early Saturday morning, refusing at the end to agree to extending the provisions of the act which allow the bulk collection of phone records by even one day past their June 1 expiration. In a video clip making the rounds, the libertarian champion waxes rhetorical while his presidential rival Lindsey Graham rolls his eyes in the foreground, like the little characters you see occasionally in political cartoons.

Paul’s refusal forced McConnell to call the Senate back from its Memorial Day break a day early for a last-ditch attempt next Sunday to salvage the controversial National Security Agency surveillance program. To add salt to the wound, Paul’s supporters advertised a “filibuster starter pack”  online, even as he was making life miserable for McConnell. Paul says he’ll spend the coming week building opposition to the Patriot Act extension, which will make for quite a session next Sunday.

This high-profile standoff between a stalwart of the Republican establishment and a sworn opponent of the status quo is typical of the rifts that have emerged in legislatures across the country as Republicans have cemented their advantage at the state level. Fundamentally, it’s a conflict between those who would train the power of government towards conservative ends, and those distrustful of government power in any form.

This distrust can have unforeseen consequences, often associated with Democrats. Earlier this year in Georgia, it was a prime factor in the defeat of the bill that would have barred local governments from banning plastic bags. In the fight over the Patriot Act, it has put Paul in agreement with another Senate presidential candidate, though not one of the three Republicans.

“Rand Paul and I do not have a lot in common on a lot of issues, but I think on this issue we’re coming from the same page,” Bernie Sanders, the Vermont socialist running for the Democratic nomination, said over the weekend.

Paul’s chances of winning the Republican presidential nomination are marginally better than the chance Sanders can wrest the Democratic nomination away from Hillary Clinton, but that’s not saying much. He has little to lose in his effort to break out in the crowded Republican field, virtually insuring that he’s going to make his Kentucky colleague’s life more miserable as the campaign goes on.

The Republican Party has proved adept over the past three or four decades at assimilating new factions, such as the religious right, into a solid front. That’s because Republicans like McConnell and his predecessors have understood the use of power as the currency of government. Negotiating a lasting accommodation with a faction that professes not to trade in that currency could pose a new challenge, at the state level and in Washington.

The sudden crisis over the N.S.A. bill has produced the inevitable stories and columns accessing McConnell’s job performance, in the face of “Democratic delaying tactics he honed in the minority, five presidential aspirants with their own agendas and a new crop of conservative firebrands demanding their say,” as the New York Times put it. In a race such as this, however, one should always be cautious betting against a contender so frequently compared to a turtle.