Dad’s Garage Theatre is on track to move into a permanent home in Atlanta’s Old Fourth Ward neighborhood and open its new doors as early as late 2016.

The first of two approvals needed from the Atlanta City Council was tentatively granted Tuesday, by the Community Development Committee. The council’s Zoning Committee is expected to approve the second measure on Wednesday. The full council is to approve the two land use measures at its July 21 meeting, rezoning property from residential to commercial to allow the theatre to operate.

Dad’s Garage Theatre plans to purchase, for a price above $2 million, a building that now houses a church and some land that adjoins the church, located at 569 Ezzard Street. The church has outgrown the facility and plans to relocate, Amanda Rhein, who serves on the theater’s board, said Tuesday.

“We’ve been heartened that everyone’s supported us,” Rhein said. “Old Fourth Ward is close to our previous location. It’s a really cool neighborhood, with lots of bars and restaurants that are a benefit to our clientele. It’s close to the BeltLine and is a very walkable neighborhood.” 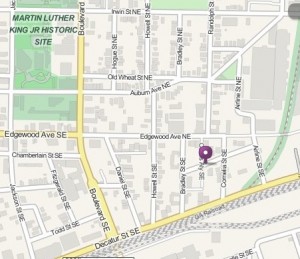 Dad’s Garage Theatre is slated to open in late 2016 in a building that now houses a church in Old Fourth Ward. The theatre is to open at the dot on this map. Credit: mapquest.com

The theatre already has plans to expand the facility by adding space for a lobby and gathering space, and a black box theater, Rhein said. The expansion would add possibly 5,000 square feet to a facility that now encompasses about 8,000 square feet, she said.

This is a new site for a theatre that at one time had an interest in a building on Moreland Avenue, in Little Five Points.

The neighborhood response was less than enthusiastic, according to an account in Candler Park’s newsletter.

Concerns included parking, the need to amend site restrictions, and the future uncertainty over what would become of the site if the theatre departs and another tenant has other needs, according to the newsletter.

The theatre selected an alternative site from the 20 or so the broker had identified. Rhein submitted, on April Fool’s Day, the necessary papers to request the property be rezoned to enable the theatre to open. Atlanta’s zoning codes allow churches to operate in residential areas; theaters do not have the same permission.

Dad’s Garage Theatre operated for some 18 years in Inman Park. The neighborhood, at the time, was ripe for such a business to open in industrial space that had been underutilized for years. The theatre developed a steady following among patrons who enjoyed its genre of improv comedy and original productions. 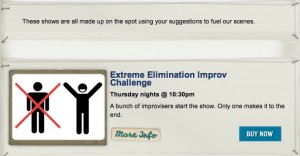 Improv comedy is one of the cornerstones of Dad’s Garage Theatre, as evidenced in this billing for an upcoming show. Credit: dadsgarage.com

As new residential developments were built close to downtown Atlanta, especially in this area that’s close to the BeltLine, the property owner developed other plans for the site.

Rhein said that the property owner notified the theatre about two years ago that the land was to be sold. The old industrial space to be razed to make way for a mixed use development.

The theatre relocated in the summer of 2013 to Seven Stages, in Little Five Points.

The new home did provide a performance space. But Rhein said the facility did not have space for other aspects of Dad’s Garage Theatre.

“People were working out of their homes, we had the shop off-site,” Rhein said. There wasn’t space in the building for classes.

“We’re really excited,” Rhein said. “We’ve been looking for a site for two years. We engaged a broker who found this site. The church has a year and a half left on it’s lease. We have the building under contract and expect to close late this year.”