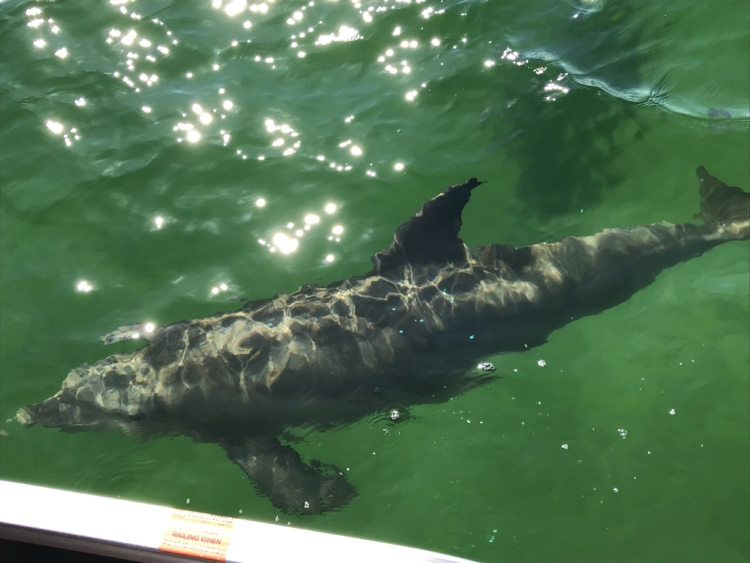 Dolphins who live in St. Andrews Bay, near Panama City, Fla. are among 17 stocks of dolphins that are at risk of dying of unknown causes in an area stretching from Apalachicola, Fla. through Louisiana. Credit: David Pendered

A new round of dead bottlenose dolphins was reported Friday by the federal government, this one south of Tampa and in addition to the dead dolphins reported earlier in the week along the northern coast of the Gulf of Mexico and the huge dead zone in the gulf that results from an inflow of fertilizers and urban sewage. 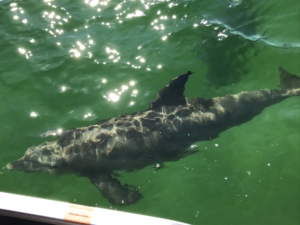 Dolphins who live in St. Andrews Bay, near Panama City, Fla. are among 17 stocks of dolphins that are at risk of dying of unknown causes in an area stretching from Apalachicola, Fla. through Louisiana. Credit: David Pendered

Scientists think the dolphin deaths reported off Florida’s southwest coast are related to a red tide that has been in place since November 2017, according to a report released Friday by NOAA, the National Oceanic and Atmospheric Administration. Red tides produce neurotoxins that can kill sea life and create noxious odors.

Hurricane Michael does not seem to have affected the red tide; it isn’t mentioned in the latest federal reports.

The hurricane made landfall on the Florida Panhandle on Oct. 10, 2018. The storm’s eastern bands pushed ashore on Florida’s west coast mounds of dead fish and the stink associated with red tide, according to a report posted after the storm by tampabay.com.

As of Thursday, 174 dolphins were reported stranded in the event that started in July 2018, NOAA reported. Examinations of the remains of several of the mammals showed “positive results” for the red tide toxin, according to NOAA’s report.

The affected area stretches from Tampa to Naples, in the counties of Collier, Lee, Charlotte, Sarasota, Manatee, Hillsborough and Pinellas. The scientific name for the organism associated with red tide is dinoflagellate (Karenia brevis), according to a report by the Florida Fish and Wildlife Service.

Dolphins are not the only casualties. But they’re the ones that NOAA seems to count. 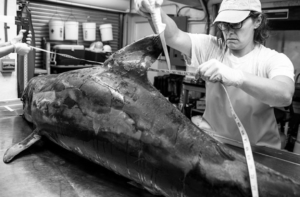 NOAA’s partners are conducting examinations of dolphins found dead of the southwest coast of Florida and finding evidence they died of exposure to red tide. Credit: Mote Marine Laboratory via fisheries.noaa.gov

The dead creatures include manatees, fish and sea turtles, according to NOAA’s report.

NOAA did make a point to observe that this isn’t the first long-lasting red tide to afflict the region. In 2005 and 2006, several species began dying off in what NOAA calls an Unusual Mortality Event.

Dead dolphins already have established an Unusual Mortality Event along the northern coast of the Gulf of Mexico. NOAA announced that UME on June 14.

More than four times the average number of dead dolphins have been reported in the area – at least 260 this year, from Feb. 1 through May 31, compared to the historic average of 57 during period, according to another report by NOAA.

The affected area stretches from Apalachicola, Fla. through Louisiana, according to NOAA.

Scientists aren’t sure why the bottlenose dolphin are dying. The remains are so old by the time they’re discovered that examinations can provide limited results, NOAA reports. Skin lesions suggest exposure to unusually high levels of fresh water.

The Deepwater Horizon Oil Spill could be involved, NOAA reports:

The annual dead zone in the Gulf of Mexico is forecast to cover as large a land mass as the state of Massachusetts because of nutrients it transports to the gulf from its draining of all or parts of 31 states and two Canadian provinces. Credit: noaa.gov

The growing size of the dead zone in the Gulf of Mexico has become a regular event, as NOAA predicts the size of the zone that will be finalized later this summer.

This year’s zone is forecast to cover about the same land mass as the state of Massachusetts. The forecast of 7,829 square miles is close to the record of 8,776 set in 2017, and larger than the five-year average of 5,770 square miles, NOAA reports.

The dead zone results from what NOAA describes as, “excess nutrient pollution from human activities, such as urbanization and agriculture, occurring throughout the Mississippi River watershed,” flowing down the river and into the gulf.

These nutrients spur a growth of algae, which die and sink in the water – resulting in lower volumes of oxygen that kill sea life.