Dead zone in Gulf of Mexico largest ever, as Georgia awaits ruling on water flow to Florida

This year's dead zone in the Gulf of Mexico is the largest on record, since mapping began in 1985. Credit: N. Rabalais, via noaa.gov

The federal climate agency on Wednesday reported the annual dead zone in the Gulf of Mexico is the largest on record – about the size of New Jersey. The report comes as Georgia awaits a ruling by the U.S. Supreme Court over the amount of water that flows from Georgia into Florida. Florida says the flow is insufficient to support the oyster habitat in the Apalachicola Bay. 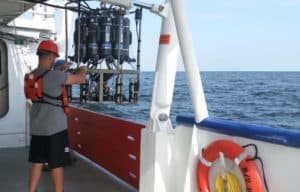 Water sensors are deployed to collect water samples that are tested for the amount of available oxygen. Credit: noaa.gov

The dead zone and the water war are not directly connected. They are related in the sense that both are manmade situations.

The gulf’s dead zone is caused by nutrient runoff from agriculture and other human activities in the watershed of the Mississippi River, according to NOAA’s statement. The nutrients stimulate an overgrowth of algae in the gulf. The algae bloom consumes oxygen in the water necessary to support other aquatic life.

This year’s dead zone in the Gulf of Mexico is the largest ever measured since mapping began there in 1985, according to the statement from NOAA, the National Oceanic and Atmospheric Administration. NOAA is affiliated with the U.S. Commerce Department.

The dead zone begins at the western edge of the mouth of the Mississippi River, located south of New Orleans. It stretches into Texas, where it almost reaches the waters off Galveston.

This year’s dead zone in the Gulf of Mexico is the largest on record, since mapping began in 1985. Credit: N. Rabalais, via noaa.gov

This is how NOAA’s statement describes the situation:

In the water war, justices are considering an advisory ruling and may issue their ruling this year. The U.S. Army Corps of Engineers has emerged as a central issue in the debate – even though the corps is not party to the suit and Florida argued vigorously to keep the corps out of the battle.

The court appointed a special master to oversee arguments in the case. The special master issued an advisory ruling that said the corps’ management practices in the Apalachicola-Chattahoochee-Flint river basin determine how much water reaches Florida – regardless of how much water Georgia sends down the river basin. This is due in part to the corps’ control of the water level in dams that line the basin.