On Saturday, a majestic tree on the front lawn of the H.M. Patterson & Sons – Spring Hill Chapel funeral home was cut down — causing grief to those who usually are there to console.

“My heart is aching,” said John Gallatin, funeral director and location manager for H.M. Patterson. “It was one of the three original trees that had been planted in 1928.”

After his father died in 1923, Fred Patterson inherited the business and decided “to construct a funeral home on a hill, overlooking trees in honor of his father and in tribute to his English-born mother,” according to the funeral home’s website. 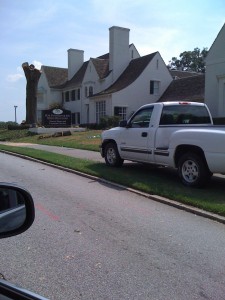 The website also states that the building was designed by famous Atlanta architect Philip Shutze who wanted it to resemble an old English manor house. By 1929, three oak trees had been planted on the front lawn.

Gallatin said he doesn’t know what happened to the first of three willow oaks that adorned the property. The second went down in a storm about five years ago.

An arborist came out to trim the limbs of the last remaining oak, and Gallatin was told that it had a root fungus and that it needed to come down.

“I called in three different arborists, and they all said the same thing,” Gallatin said, adding that he went through the various stages of grieving, including denial and then acceptance. “They are like people.”

Finally, the tree was cut down this past weekend. 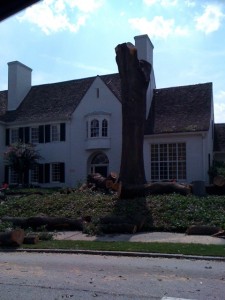 “I’ve been in mourning ever since,” Gallatin said, adding that two other trees that were dead in the back yard of the home also were cut down.

Marcia Bansley, founder and executive director of Trees Atlanta, said Patterson’s had received approval from the city’s head arborist, Ainsley Caldwell, to remove the three trees because they were hazardous. In that situation, there is no requirement to replace the trees.

“Even though they had permission to remove the trees, the loss of their beauty makes me sick and takes a lot of the charm away from the building,” Bansley said. “I hope they will replace the very large oak and another one this winter when it is the correct time to replant. The beautiful trees brought a lot of comfort to those whose relatives had funerals at Patterson’s. The building and the trees were an icon for Atlanta citizens, and replanting the trees will help to restore the special charm of the place.”

Gallatin said that a landscaper has been hired to look at what should be done with the land.

“We are going to replant a tree,” he said. “I just don’t know when or where.”

Previous Article
The recent deaths of friends a reminder we’re losing part of what made Atlanta special
Next Article
Southern Co. to promote Thomas Fanning to chairman, president and CEO