The debate that didn’t go there 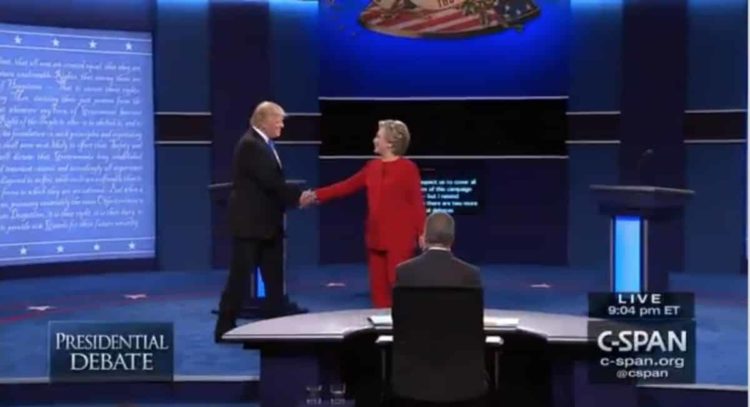 Presidential candidates Donald Trump and Hillary Clinton greet each other at the outset of the first presidential debate, on Monday. Credit: c-span.org

We’ve now had the first debate between the Democratic and Republican candidates for president on the serious issues facing our country. So first, let’s talk about Gennifer Flowers.

She matters, because throughout his campaign for president, Donald Trump has in various ways tantalized audiences with the expectation that when he finally got on a debate stage with the woman some of his younger supporters have hated all their lives, he would “go there.” He wouldn’t hesitate to tear into the Clintons in the ways Clinton-haters have fantasized that a candidate would, dragging all their scandals into the harsh spotlight of a face-to-face debate.

As late as Sunday, there still seemed the chance that something that would fulfill those fantasies might come to pass. Irked that Clinton invited his billionaire rival Mark Cuban to sit on the front row, Trump tweeted that he might invite Bill Clinton’s old Arkansas paramour, Gennifer Flowers, to sit beside him.

Flowers was so quick to accept Trump’s invitation that she did so before he extended it, forcing a delicate walk-back by Kellyanne Conway, whose tenure with the Trump campaign has coincided with his rise in the polls.

The thing is, you can almost hear her saying, Trump already has the votes of those who long for him to go there. To get over the last hurtle, he needs to persuade those who’d prefer that he not go there.

And so it came to pass, that in this debate on which so many vengeful expectations have been riding, Trump’s most frequent words to his opponent — I counted five times and I may have missed a couple — were “I agree.” He agreed with her about maternity leaves, community policing, and a few other issues that contradicted Republican orthodoxy, and confined himself to the core issues on which he hopes to connect with disgruntled Democrats and independents: trade, immigration and civil order.

“I want you to be very happy. It’s very important to me,” he said early in the debate, after asking if she wished to be called Secretary Clinton. And if there was half a smirk, the comment was at least half serious, too.

Sure, he brought up her emails — touching off the first of several moments in which the audience, on both sides, defied the prohibition against outbursts. He brought up that picture of Barack Obama in African garb that her campaign circulated, and doubled down on his claim that she, through her minions, created the Obama birther controversy. But these and all the other barbs he threw at her bounced off that fire-engine red pant suit without visible effect.

Late in the evening, Trump, who seemed exasperated that he hadn’t rattled Clinton nearly as much as she’d rattled him, came as close as he would to going there.

“I was going to say something extremely rough to Hillary, to her family, and I said to myself, I can’t do it. It’s inappropriate. It’s not nice.”

But he’s already said “it,” over and over again. Saying it to her face would not only have been inappropriate, it would have been extraordinarily unwise. Only in vengeful fantasies would Clinton not be prepared to respond without flinching to whatever was thrown at her.

Trump defended what he didn’t say by calling attention to the millions in negative ads Clinton has put up against him.

“It’s not nice and I don’t deserve that,” he said in a genuinely wounded way, revealing a skin much thinner than his opponent’s. By then he almost seemed to be trying to run out the clock.

Just because it was not the debate that some of his supporters — and possibly Trump himself — expected doesn’t mean it was a bad debate for Trump. What probably connected best for him were those lines in which he ignored the fine points of the debate altogether and cast doubts about the integrity of the nation’s entire political process.

“It’s all words. It’s all soundbites,” he said, and a lot of unhappy Americans no doubt agreed with him. His best line of the night may have been his retort that Clinton’s years of experience in government were “bad experience.”

In the battle of the double screens, however, Clinton held a clear advantage, needling Trump into a contrast of expressions which spoke silently to Lester Holt’s question, in the closing minutes, about who had the temperament to be president. Some have said Clinton needed to appear more warm and fuzzy, and she did smile a lot. But what she really needed to do was show she has the steel to be president, and as soon as the word “stamina” came out of Trump’s mouth, she had her Elizabeth-at-Tilbury comeback waiting to flatten him.

It’s no exaggeration to say that one of the most important questions at the end of this debate is the impact it will have, not on the voters and certainly not on Clinton, but on Trump. The polls right now could go one way or the other. Despite all the hype surrounding this first debate, a lot is riding on how the candidates conduct themselves from here on, and we don’t know at the end of Monday night’s debate how much it will gnaw on Trump in the coming days, win or lose. We’ll find out when these very unconventional opponents meet again in St. Louis.