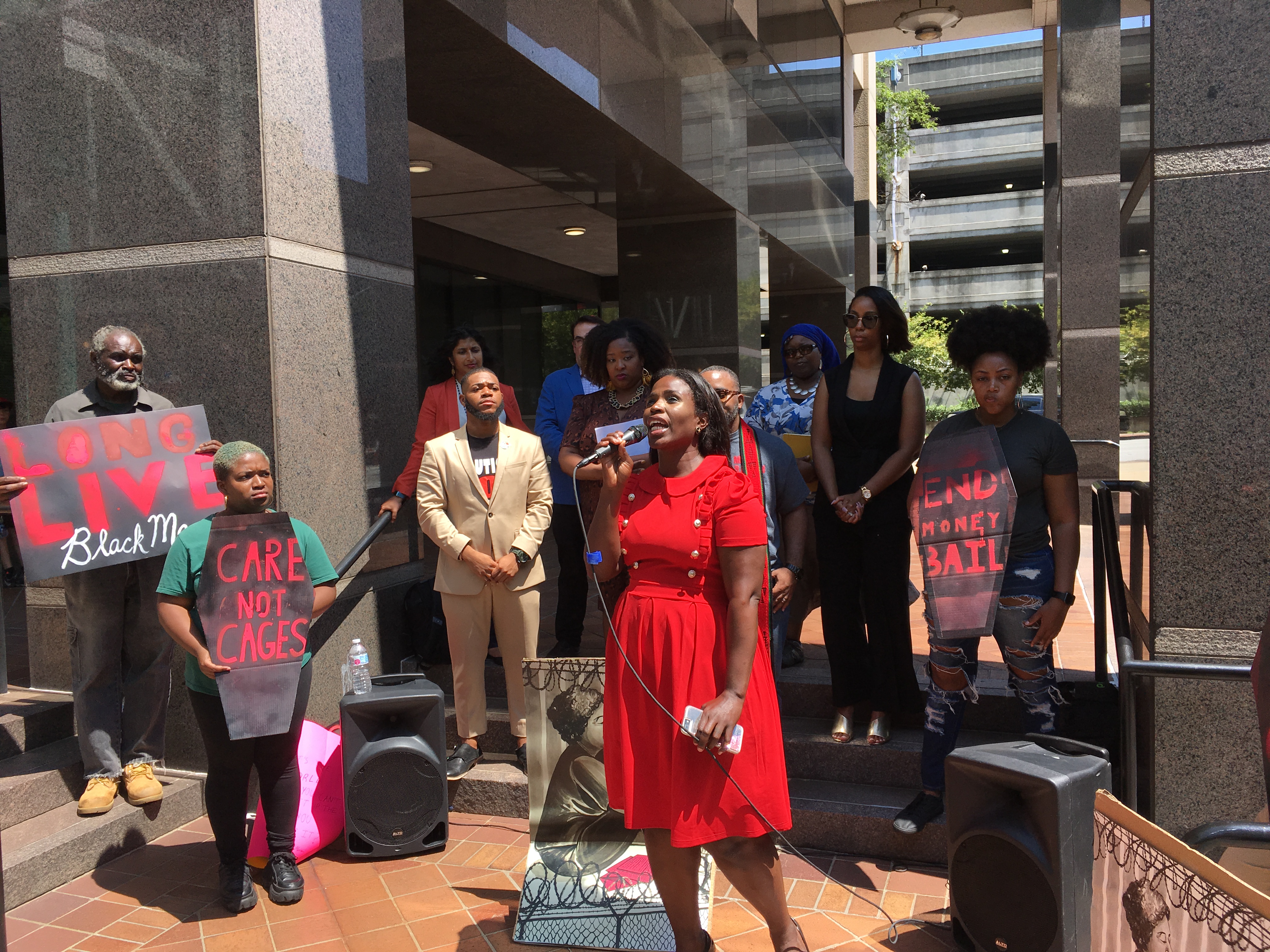 Bridgette Simpson was one of a dozen or so activists outside the Fulton County Government Center on Wednesday. Credit: Maggie Lee

Fulton County’s commissioners are open about the overcrowding crisis at the county’s main jail. Activists have a solution: stop what they call “over-incarceration” in the county.

“The Fulton County jail is overcrowded because of the court dockets … and it’s taking people years to see a judge. Not because they need more room,” said Bridgette Simpson, who’s been incarcerated herself and is lead organizer of Women on The Rise’s campaign to close Atlanta’s city jail. 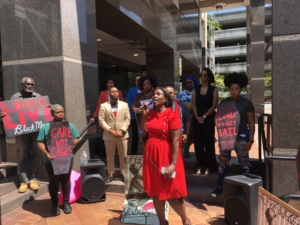 Bridgette Simpson was one of two dozen or so activists outside the Fulton County Government Center on Wednesday. Credit: Maggie Lee

She was one of maybe two dozen folks from several organizations and houses of worship who came out to a press conference and rally outside the Fulton County Commission meeting Wednesday meeting.

Their message is similar to what many of the same groups said to the city of Atlanta: people who are no threat to the community are wrongly locked up.

“We see people every day put in jail just because they’re poor, sitting in jail because they can’t afford to pay bail,” said Jill Cartwright with Southerners On New Ground, which is campaigning to end money bail and pre-trial detention. “We see that as a violation of civil rights and human rights.”

It’s an idea that campaigners nationwide are taking to their cities and counties: that cash bail is unfair for a person who has to sit in jail for lack of a few hundred dollars, whereas someone with money could bail out and await trial at home on the same charges.

That’s why advocates call cash bail part of the criminalization of poverty, and one cog in a machine of mass incarceration.

The Fulton County Commission is well aware that the Rice Street jail is overfull.

On Wednesday, as activists outside started a chant that began with “Build black futures, keep our people out of jail,”  Fulton County Commission Chairman Robb Pitts was speaking to reporters inside.

He said that 196 people were still in “boats” in jail — human-size plastic bins that hold a mattress but can stack out of the way during the day.

Fulton County’s Rice Street jail is the county’s main lockup. A separate county jail for women is under a federal judge’s orders to clean up “repulsive” conditions. Credit: Maggie Lee

“If I could, and my colleagues, could release and get everyone out of a boat today, we would. We simply do not have the authority to do so,” Pitts said. “We have the will, but not the authority.”

That is, the sheriff runs the jail, judges set bail (or not) and the district attorney files criminal charges. The Fulton County Commission approves the budget for all three, but can’t exactly boss them around. Those folks are answerable to voters, the same as commissioners are.

Pitts said those three offices are working together and making progress, but not fast enough for him.

Fulton county’s manager himself said in late June that there were about 500 people who could be managed out of jail: folks who have been there more than a year, people who need to be transferred to state prisons and those booked on misdemeanors. He also said that the reason the jail population is higher than the same time last year is judges granting fewer “signature bonds:” letting people bond out of jail on the promise of coming back for their hearing.

Last month the county commission did approve hiring an “expeditor” team: people who will comb through the records on the people in jail, and figure out if some of them might be good candidates for speeding out from behind bars.