Atlanta’s average high in February is 57 degrees, but the “historic and catastrophic” Winter Storm Pax last week virtually shut down Atlanta. Schools and businesses closed and no one, it seemed, was out on the icy and treacherous roads.

Outside of emergency personnel, few people were busier than Tony Powers. Because he owns his business, he was motivated to show up. Because his store is near his home, he could walk to work. In an old-fashioned week when families hunkered down and disconnected from their usual fast pace, Powers was set up with the obscure winter survival gear rarely needed in the South. He was primed to deliver. 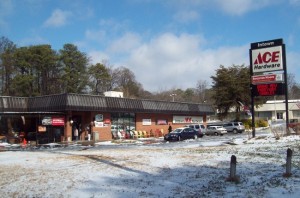 Decatur Ace Hardware, a hub that local residents, opened every day during the ice storm.

Forty customers were waiting outside when he unlocked the door of his Intown Ace hardware store in Decatur the morning before the ice storm. Before the day ended, Powers had run up 22,000 steps, the equivalent of 12 miles on his fitness app, after assisting customers swarming for snow removal chemicals and sleds and fixing the broken knob on one guy’s propane grill tank – mine.

Within two hours, Powers sold four pallets of ice melt and 200 sleds. He sold seven generators and all the kerosene, firewood and lanterns before anyone felt the first drop of ice or snow.

Scenes like this were replayed across metro Atlanta last week, but unlike most businesses, Intown Ace stayed open even after the storm hit, opening each day at 8 a.m. sharp.

On Wednesday, when the roads were covered with ice and the governor and mayor congratulated people for staying put, Powers managed to deliver a customer’s Big Green Egg grill– a wife’s gift for her husband.

“Did we have to open?” Powers said Thursday right before the thaw. “Probably not but it was the right thing to do.”

Powers and co-owner Dave Jones live close enough to walk, and any employee who could safely show up did. When few customers showed up after the storm hit, the owners offered 50 percent off the purchase of any single item under $30 to anyone who could make it into the store.

A few customers who showed up Thursday braved the roads and drove. Others, like myself, walked. 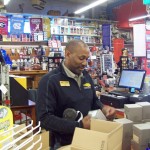 In that mile and a half, I looked forward to the funky warmth of a place where I could find Ball Mason jars, Pig’s Ass barbecue rub, Roundup and kitschy art. The weather conditions made this destination and its owners even more like a throwback to a time when people walked to stores and their dogs came in with them. The owners seem to be on a first-name basis with almost everyone. If you’re a regular, you’re likely to run into somebody you know here.

Especially after being cooped up for more than two days, this was exactly the kind of place I wanted to connect to on my three-mile round trip through ice, snow and slush.

“It does move across that line from being a small business to becoming your neighborhood hardware store, where you’re a repeat customer, to where you are friends,” said Patrick Moore.”

Moore, who lives about the same distance from the store as I, just in a different direction, said about half of his birthday presents have come from the store since he moved from Birmingham to Decatur in 1997. Powers even attended Moore’s 40th birthday party. The Intown Ace, Moore said, reminds him of the hardware store he frequented in the tiny west Alabama town of Reform, Ala. (pop. 1978) where he grew up.

Decatur may be a long way geographically and culturally from Reform. However, it is often described as a small town surrounded by a large city.  So too does the Intown Ace feel like a small hub within Decatur’s hub, Moore said. I agree.

Instead of advertising, the store sponsors youth teams, community fundraisers and school auctions. The latest fundraiser is a tote bag decorating contest for Lifeline Animal Project in March.

If you arrive there at the right time, you can get freshly popped popcorn for free. During the Tuesday pre-storm rush, employees passed out free apple cider. “Chaos in the first two hours,” Powers recalled. “It took two hours for me to look up and realize I hadn’t drunk my coffee yet.” 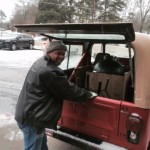 Three times that day, Powers sent a truck to a Gainesville warehouse to replenish stock. When he didn’t have another extension cord to sell to a customer who had bought a generator, he loaned her one of his own.

Tuesday was so busy Powers could not deliver on his promise made to Moore’s wife, Elizabeth, the day before about the Big Green Egg charcoal grill. It was Patrick Moore’s birthday present. So Powers came through the next morning.

Patrick Moore, who was working at home, said his street was completely deserted when he saw a red jeep driving toward his house and then back into his driveway. He wondered if the driver was lost.

“Then they came to the door and told me, ‘we’re here to deliver your Green Egg,’” Moore said. “They did it over ice and snow, just for me.”