A concept illustration of what a light rail station might look like at Campbellton Road and Delowe Drive. (MARTA)

Will MARTA’s new Campbellton Corridor service be bus rapid transit or light-rail trains? It’s time to get your final opinions in before the transit agency settles on an option later this summer.

Whichever option is chosen for the southwest Atlanta route, be prepared to wait a while longer after this milestone moment. MARTA says it would be 2028 before BRT could start running the route and 2031 for light rail. 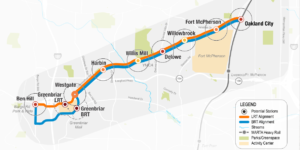 A map of station locations and routes for the future transit on the Campbellton Corridor in southwest Atlanta. The light rail route is in orange and the bus rapid transit route is in blue. (MARTA)

MARTA presented routes, or alignments, and other details for both options at June 10 virtual meeting. It’s also asking for public feedback on alternative land-use plans for areas around each station, the locations of which were settled after a previous public meeting last year and which are the same regardless of the transit type.

The corridor is the transit route between the Oakland City MARTA Station and the area of Greenbrier Mall and the Barge Road Park & Ride alongside I-285. The roughly 6-mile route runs mostly along Campbellton Road. The current service is the Route 83 bus, the second-busiest in the MARTA system, with more than 4,500 daily riders.

In 2019, MARTA began planning for replacement service with either BRT or light rail — both of which are projected to be much faster than the 83’s current trip time of 30 to 40 minutes.

The short version of MARTA’s latest presentation: Light rail would be the faster and higher-capacity service, while BRT would be less expensive to build and maintain. Light rail also requires much more property acquisition and impacts on driveways and traffic.

The routes presented by MARTA in the meeting are largely the same for either type of transit, with the difference coming at the mall and the park and ride. The BRT would follow Greenbrier Parkway around the mall, while light rail would take a more direct route on a new bridge over I-285 and Langford Parkway. 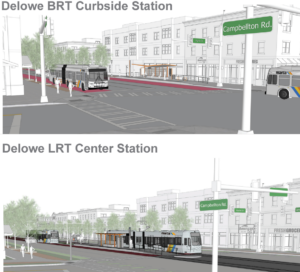 Concept illustrations of what the stations for bus rapid transit and light rail might look like at the future Delowe Drive stop. The buildings in the background suggest what future transit-oriented development might look like. (MARTA)

Both types of transit would have 10-minute headways. MARTA estimates BRT would run the route in about 19 minutes and light rail would run it in about 16 minutes. A BRT bus would hold 120 people, while a train would hold 200.

Several questions from the public in the meeting showed enthusiasm for connecting the service to other transit routes, like the light rail planned for the Atlanta BeltLine, though MARTA had few details to share in response.

Planners in the meeting said MARTA intends to decide on the transit type — known as the “locally preferred alternative’ — and get formal approval from its board this summer. Then engineering would begin on how to build the transit, as well as land-use planning around the future stations.

MARTA has a website with details of the BRT and light rail alternatives available here and is conducting a survey there through June 27. MARTA said a video of the virtual meeting will be available on that site by June 18. The public also can email comments to publichearinginfo@itsmarta.com.