The Democrat chosen by Gov. Nathan Deal to serve as interim CEO of DeKalb County wrote a piece with a Republican colleague that appeared last week on Shirley Franklin’s website. It calls for the position of CEO – and DeKalb’s entire form of goverment – to be eliminated.

May opposed the proposed 2012 transportation sales tax, saying it provided too few benefits to south DeKalb. About the same time, May said he was considering running against incumbent CEO Burrell Ellis because he disagreed with the direction Ellis was taking the county.

May was sworn into office Tuesday evening, following Deal’s suspension of Ellis as CEO. A grand jury indicted Ellis on 15 counts of allegedly trying to extort campaign contributions from companies and their employees.

Ellis has denied any wrongdoing.

DeKalb’s government issued a statement Wednesday that provides information about May, taken from his county website, and the following comment from May: 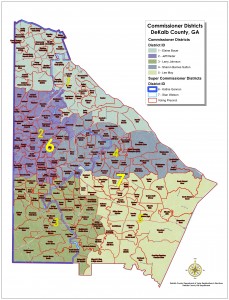 May was elected to serve the farther reaches of eastern DeKalb County. District 5 is bordered to the south and east by Rockdale County, and to the west by (basically) I-285. The northern border is generally in line with Decatur.

May ran his 2012 reelection campaign on about $117,000, according to his campaign’s financial disclosures. May reported a balance of $2,454 on his June disclosure.

May ran in a four-way primary in 2012 and pulled almost 68 percent of the vote, thereby avoiding a run-off election. No Republican stood against him in the general election.

The statement released by the county reports that May was first elected in 2006, was reelected in 2012, and served as the commission’s presiding officer. May is the son of a pastor, a graduate of Emory University’s Candler School of Theology, with a masters of divinity degree, and earned his undergraduate degree from Clark  Atlanta University.

The column outlines the history of DeKalb’s form of government, which is unique in the way it provides the CEO the authority to run the county’s daily affairs, and allocates policy-making responsibilities to the commission.

Lee and Boyer make their case for restructuring DeKalb’s form of governance after an introduction that states: