Delta CEO Ed Bastian speaks at the Sept. 21 meeting of the Kiwanis Club of Atlanta (Photo by Maria Saporta)

Bastian commented on the city elections after speaking at the Tuesday lunch meeting of the Kiwanis Club of Atlanta.

“The city is at a real inflexion point,” Bastian said during a brief interview. “We are looking for great leadership.”

“Speaking as a as an airline guy, I won’t get into all the politics of Atlanta,” Bastian said. “But we have the most important airline asset in the world here. Hartsfield-Jackson is the best run airport; it is the biggest airport, and it drives the most amount of economic value for our region over any other asset in the state. The city does a fabulous job running it. We are thrilled to call Atlanta home because of that asset.” 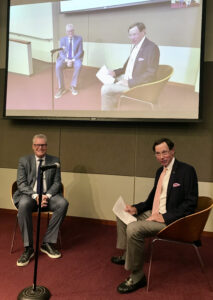 Although he didn’t mention the State of Georgia by name, Bastian has previously said he is opposed to efforts for the state to takeover Hartsfield-Jackson.

Kiwanian Phil Smith asked Bastian about the company’s government relations with the state, and he apologized for “a few curveballs” legislators have thrown at Delta over the years, such as trying to remove a jet fuel tax credit when they didn’t like certain positions the airline had taken.”

“Growing up as a, as a corporate leader, we’re trained to keep our head low,” Bastian. “We try to stay out of politics…. Unfortunately, when you look at the world we’re in, the society we’re in and the divisiveness we’re facing, the values that our brand and our company represents, not just to our community but to the world, sometimes you feel compelled to have to speak and say something, Sometimes you have to put yourself out, out in harm’s way, and I appreciate some people agree, some people don’t agree and but we’re not trying to be politicians. We are just trying to represent our company and the values we stand by.”

During his talk to Kiwanis, Bastian covered may topics. He called the pandemic the “biggest” crisis in history of the airline industry – greater than 9/11, the 2008 global economic recession, the Gulf War or mergers. But Delta did not want to let a crisis go to waste. And what a crisis it was.

In 2019, Delta had the most revenues of any airline in the world – generating $50 billion. It celebrated a record profit sharing with its employees on Valentine’s Day 2020, and then 30 days later its revenues had dropped to 3 percent.

“It was as dramatic as it sounds, and it still gives me shivers when I say that.,” Bastian said. “But we’ve picked ourselves up. We’re not all the way through it yet. We’re about two thirds of the way through, in terms of revenues coming back.”

Delta is back hiring people. It needed to hire 3,000 flight attendants, and it got 35,000 applications.

“The brand is strong,” Bastian said. “People want to work for us, and you’re going to see us continue to grow. It’s going to be good for Georgia.”

But Bastian said the No. 1 challenge Delta faces is environmental sustainability – especially when 98 percent of its carbon footprint comes from jet fuel.

“We need to find new technologies that will fuel our planes,” Bastian said, adding that the airline industry’s use of jet fuel creates about 4 percent of the country’s carbon footprint. “If we don’t get on top of this soon, that number is going to continue to grow as other industries continue to reduce their footprint.” 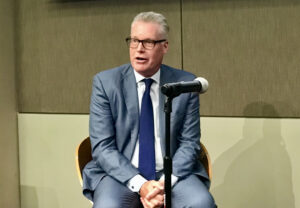 Delta CEO Ed Bastian speaks at the Sept. 21 meeting of the Kiwanis Club of Atlanta (Photo by Maria Saporta)

Over time, people may be reluctant to fly, which is already happening in Europe where there “flight shaming” because of the carbon footprint.

But Bastian proudly said Delta is a carbon neutral airline. It is offsetting the carbon footprint of the airline by investing in carbon elimination techniques, such as the reforestation of the globe, to return the world to a natural forum of healing itself.

“It’s a really important and difficult topic for us all in the in the aviation industry,” Bastian said. “We don’t want our customers to have to decide between seeing the world and saving the world. We need to be able to do both.”

Another big priority for Bastian is to improve diversity scores at the airline with hiring, promoting as well as retaining Black and women employees.

“The white male leadership of the company is decreasing, and that’s good because when you’re not diverse, you don’t understand your differences,” Bastian said. “Your differences make you stronger.”

Bastian also said the airline much continue to pay down the debt that it built up during pandemic to the tune of almost $8 billion. The goal will be to “pay that down over the next several years.”

Delta opened its campus in June requiring its employees to return to the office unless they had a valid reason to stay home. About 80 percent of its employees had to go in to work during the pandemic. Someone can’t clean or fix planes from home.

Bastian said people are enjoying being back together, and most employees have gotten vaccinated. “Personally, I never left the office,” he said. “I never worked remotely. I was in the office throughout the pandemic.”

About 82 percent of its workforce has been vaccinated, and Bastian expects that 90 percent of Delta’s workforce will be vaccinated by the end of October. People who don’t get vaccinated have to pay a monthly fine – an insurance surcharge.

“People talk about their freedoms and liberties,” Bastian said. “There’s nothing free about freedom. We all know that we’ve paid a big price for freedom.” 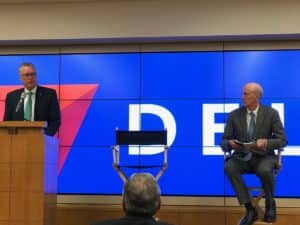 Even though the airline is still rebounding, Bastian said it has continued to live up to its charitable commitments. A goal was to do all it could to “protect our people, protect our customers, protect our community” including its support of the Westside Future Fund, Junior Achievement, the American Red Cross and the United Way of Greater Atlanta.

Frank Blake, the retired CEO of the Home Depot who serves as Delta’s board chairman, offered Bastian wise counsel at the beginning of the pandemic: A crisis is not the time to build character. A crisis reveals character.

“This revealed the character at the heart of Delta,” Bastian said. “I could not have imagined how positive it is. We’re not all the way done yet, but we are in the last legs of this. I’m very encouraged.”