State Rep. Karen Bennett, D-Stone Mountain, at Georgia Department of Labor office in Decatur on Monday. She said Republican Labor Commissioner Mark Butler should "step up or step out." (Photo by Maggie Lee)

Some Georgians are very unhappy with the state agency that sends out — or sometimes doesn’t send out — unemployment payments.

She’s usually working booking musicians at venues all over the world.  But now, nobody’s touring. So Lewis-Pegel said she applied to the state in April for benefits that even contract workers could get, thanks to temporary federal cash.

She said that on May 3, the Georgia Department of Labor sent a letter saying she would be assessed for benefits.

But it hasn’t happened, she said.

“Every time I call, they say ‘We’re taking the backlog,'” Lewis-Pegel said. “I’m starting to get impatient.”

Lewis-Pegel said she knows the pandemic is unprecedented, but she said the state Department of Labor has had months to sort it out.

Atlantan Liston Broughton said he was going back and forth with the Georgia Department of Labor even before COVID-19.

But more than he spoke about himself, he about folks who are on the financial edge, who might already be losing their phone or internet and can’t get in touch with the Department of Labor. Broughton said the offices need to open for in-person visits.

It’s time do “what can be done to get this problem solved before a lot of people … are put into poverty by our government,” Broughton said. 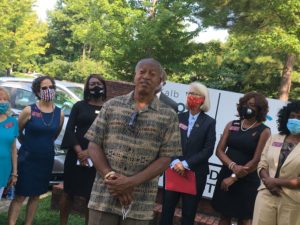 Atlanta resident Liston Broughton said unemployment offices ought to be open so everyone can have access. (Photo by Maggie Lee)

Broughton and Lewis-Pegel came in person to the Decatur edition of a series of press conferences and semi-virtual rallies that Democratic state legislators have called at unemployment offices across the state in the past few weeks.

Broughton and Lewis-Pegel echo the thousands of Georgians who congregate on Twitter and Facebook for mutual aid and moral support in quests to get unemployment payments. Witness Twitter user Feisty Heifer, real name Sabrina Hogan, a private person-turned-folk hero who helps shepherd people through the process.

Lewis-Pegel is part of a 12,000-member Facebook group for Georgians who are trying to get unemployment. When somebody in the community gets their check, Lewis-Pegel said, you’re happy for them. But you also wonder where your check is.

Stone Mountain Democratic state Rep. Karen Bennett says her staff are doing what other state legislators’ staff are doing: collecting names and information from the constituents who call asking for help, and forwarding that to the Department of Labor.

The office of Georgia Labor Commissioner Mark Butler said last week that  92% of valid claimants had received benefits in the past 19 weeks, where a payment has been requested.

But many others just aren’t eligible, the office said in a press release.

According to the department, over 135,000 claims alone had been filed by people who hadn’t worked in 18 months, making them ineligible for regular unemployment payments. 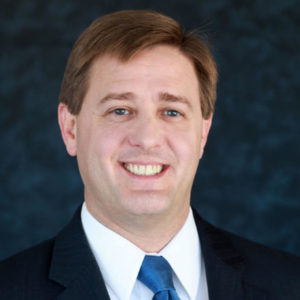 People can’t get unemployment if they were fired for cause or quit.  And many times, the department said, the employer and employee have different versions of what happened and that takes even longer to gather information for a complete decision.

On Monday, Butler said that the department had had to temporarily close 15 centers across the state and several divisions of the state office for a two-week quarantine due to COVID-19 cases and one death.

“We are not immune to this virus and when the average age of your workforce is 53 years of age, you must make decisions that protect your staff and in turn allow us to maintain a healthy workforce to process the 3.3 million claims we have worked since March,” he said via email, adding that the Department of Labor has hired temps.

“All of our services are available online and our staff continues to answer calls, process claims, respond to customer inquiries, and provide assistance to applicants,” he said.

But some of the Democratic lawmakers at the Decatur unemployment office say their constituents are coming to them with things day after day like complaints that there’s no way to correct errors, that it’s unclear how to report that your identity has been stolen, or that you just can’t get anybody on the phone.

Bennett, who doubles as the chair of the Georgia Legislative Black Caucus, said the caucus has some policy demands of Georgia Gov. Brian Kemp, Butler, and the utility regulators on the Georgia Public Service Commission — all Republicans — plus the federal Department of Housing and Urban Development. The caucus wants cash and manpower directed to the backlog in unemployment claims as well as a pause on evictions and utility shut-offs.

Georgia Democrats have just about the same list of asks.

“When you have people that hate government running government, what do you think is going to happen?” she said.