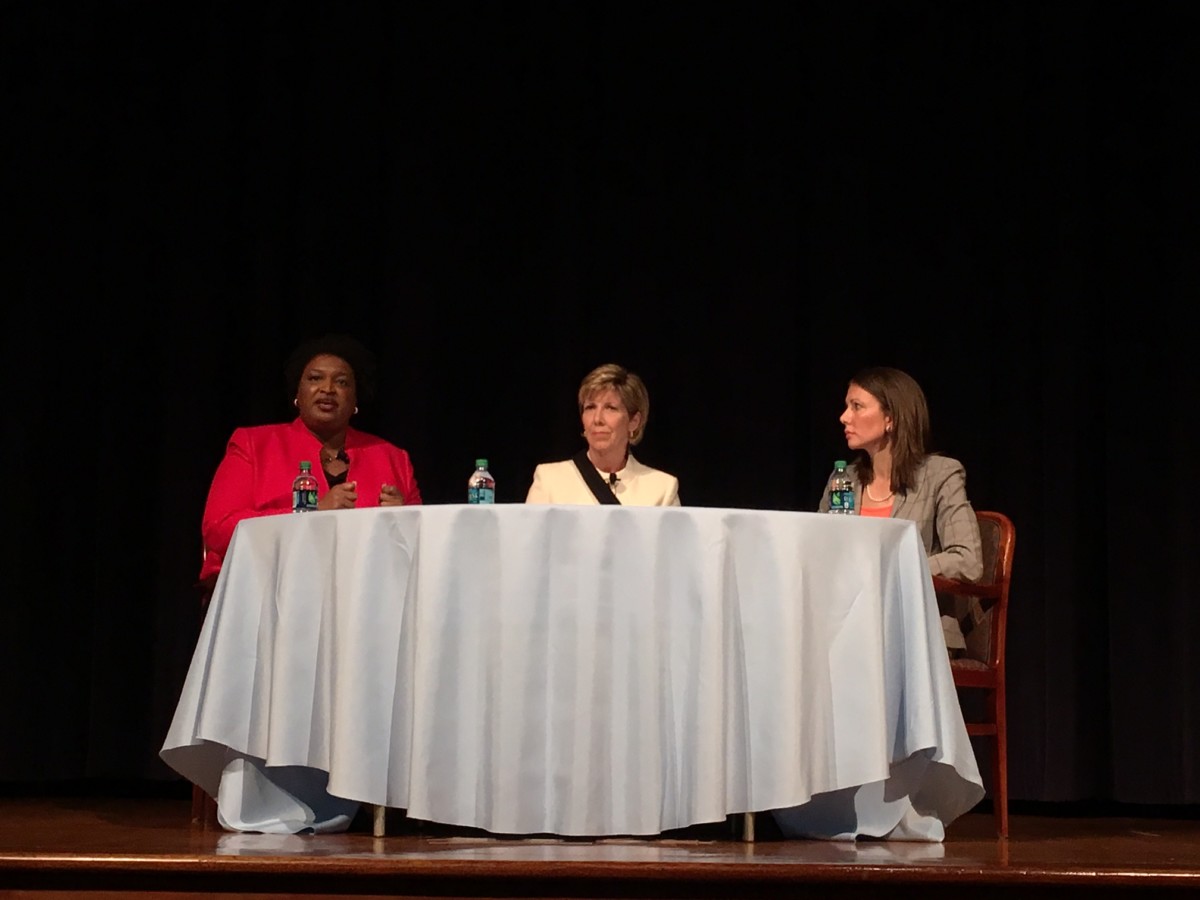 The 2018 race for the Georgia Democratic gubernatorial nomination got a bit more heated Monday night at the Carter Center. That’s when former colleagues Stacey Abrams and Stacey Evans sat down for a conversation together as rival candidates for the top political job in Georgia.

They’re both attorneys and they used to work in the same building: the state Capitol. Abrams was until recently the state House’s top-ranking Democrat and Evans was one of the members of her caucus. They both just left the House for the gubernatorial campaign trail — and they’re very familiar with each other’s work.

They’ve both been in office at a time when the GOP has a lock on statewide offices and large majorities in the state House and Senate. So the question for minority party members is when to and how to use the relatively modest power they can wield, especially when Republicans need a handful of crossover votes.

On stage at the Carter Center, Abrams and Evans reopened a split over the “Opportunity School District.” That was a plan to give the state wide powers to intervene in public schools it deemed to be failures, and probably one of the most contentious bills of 2015.

Abrams voted against it; Evans, for it.

Abrams said Evans’ vote was a signal of support for privatizing public education — anathema to Democrats who seek good public schools open to all and who predict that privatization means some won’t get access.

“You voted for the Opportunity School District, which included a path for private charters to come into the state of Georgia. You voted for vouchers, you didn’t vote it for the last two times, but you voted for it at the beginning and I think those are signals of privatization of public education” Abrams told Evans. 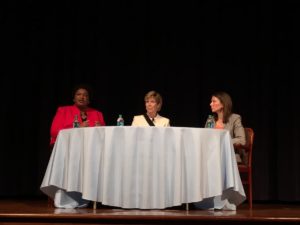 Evans countered that the OSD allowed not private charter schools, but private contractors, as schools can already use. She said she couldn’t let the status quo continue while parents in her district argued that OSD might mean more resources for their “have-not” schools.

“I did vote for the Opportunity School District, not because I thought it was a good bill; I certainly didn’t think it was a perfect bill, but I couldn’t stand by and just just let the status quo continue,” Evans said.

But plenty of Democrats voted against the OSD, for many reasons. Some pointed out that the state doesn’t fully fund its own education funding formula — and doing so might be a good first step to improving schools. Some others also said the state was unclear or misguided about how it thought it could improve schools. Others said it usurped local voters and the school board members they chose.

In the end, the OSD failed not because of the Legislature, but because the public voted it down in 2016. The Legislature came back with a reworked and milder proposal this year.

Abrams’ comment about vouchers refers to an Evans vote on Student Scholarship Organizations, a controversial type of nonprofit. People can get a state tax credit for pledging money to private schools’ scholarship funds via SSOs.

Fans say they enable students who just aren’t a good match in their neighborhood school to go to a more suitable private school. Critics say the cash bankrolls many kids whose families would pay to send them to private school anyway — and sees the government lose out on tax revenue in the process.

Evans did split from much of her caucus in a vote for a 2011 SSO bill — she said because of transparency provisions that would have showed more about who was getting scholarships. She said SSOs aren’t vouchers; and anyway she voted against it later when transparency provisions were removed. Both Evans and Abrams each voted twice against an SSO expansion bill this year.

Elsewhere on the education ladder, the two clashed over HOPE — the lottery funds that help bankroll pre-K as well as scholarships to universities and technical colleges.

In 2011, Abrams signed onto a GOP bill that raised the grade point standards and wrote in an SAT score requirement for a full ride to college. She said that in 2011, HOPE was broke and broken and she fought to preserve it as best she could in a GOP-run Legislature, including making sure that students still got some scholarship money, even without top grades or a high SAT score.

But Evans said the 2011 cuts failed one of the purposes of HOPE — to help students who need the help the most. And, returning to maybe the main plank in her campaign platform, she said technical education needs to be tuition-free.

Both women, however, are on the same page overall: both said HOPE should provide need-based aid.

The nearly hour-long talk between the two, moderated by former Georgia Secretary of State Cathy Cox, might have been a bit of an insider baseball conversation. But the perhaps 250 people in the audience were a bit of an inside baseball crowd — under the tag line “We’re with Stacey,” it was a fundraiser for Georgia’s WIN List, a political action committee that aims to get pro-choice women elected.

They were the kind of crowd that claps and hoots at the words “redistricting.” That’s another insider baseball reason Democrats would really like to win the governor’s office in 2018.

In Georgia, like in most states, state lawmakers draw their own districts as well as those of other elected officials, like members of the U.S. House. In 2021, after the next U.S. Census, the state Legislature will redraw the districts for all kinds of elected offices. Republicans will almost certainly still control the state House and Senate, but a Democrat in the governor’s office would make the redistricting a two-party affair.  When it’s up to one party, be it Democrat or Republican, the temptation to gerrymander is strong.

But that’s a way off yet.

The two women have certainly raised more than $1 million between them though the primary vote is not until May. New fundraising totals will be published in the coming days, but as of June 30, Abrams reported having raised almost $542,000; and Evans reported just over $415,000.