As Democrats seek a new way, the two Staceys become a friction point 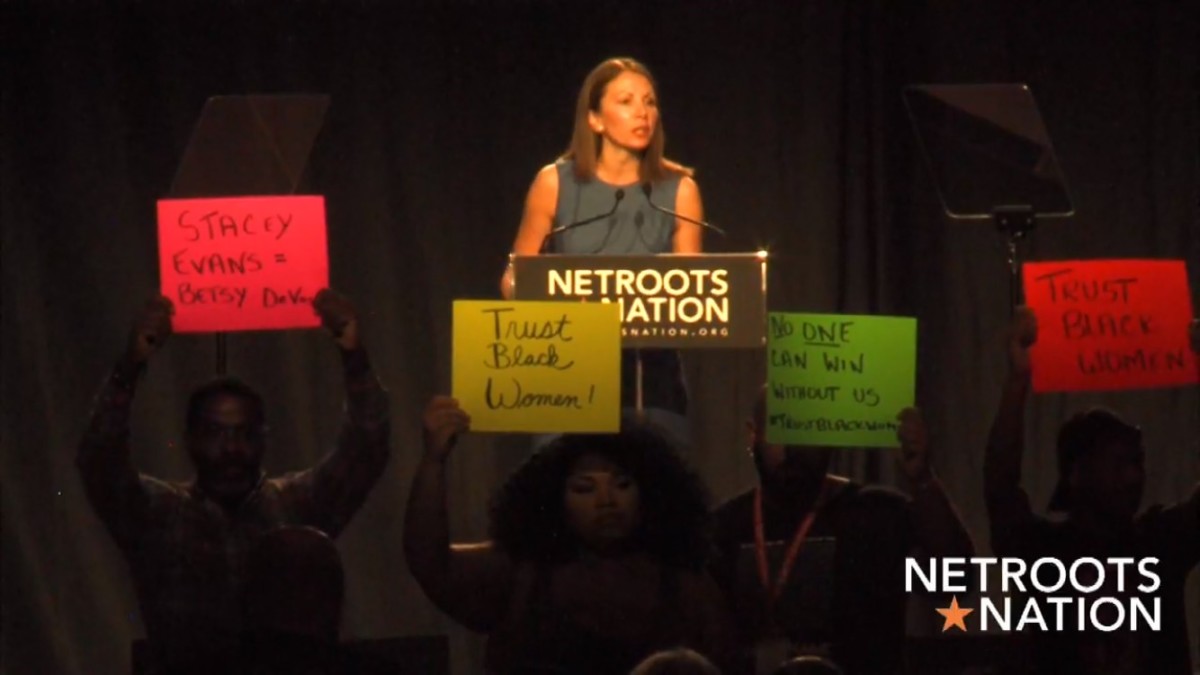 By an accident of timing, the heckling of state Rep. Stacey Evans at the Netroots Nation convention in Atlanta Saturday has invited an inevitable but not very illuminating comparison with what was going on in Charlottesville the same day.

What happened in Charlottesville was murder and domestic terrorism, made the more tragic by the accidental loss of two police officers in a helicopter crash. It was a dangerous inflection point for an administration already on shaky ground.

The dustup at the convention of liberal activists here was nothing approaching that. It was simply, with no need for exaggerated comparison, dumb.

“Trust Black Women” may be a phrase with an historical pedigree, and “not a rebuke to my opponent’s race,” as Evans’ rival for the Democratic gubernatorial nomination, Rep. Stacey Abrams, claimed in a statement later in the day. But this nuance gets lost when there is video footage of people waving placards and chanting the phrase to disrupt a white candidate’s speech.

Even such as Nancy Pelosi have drawn boos at Netroots, so as the more conservative of the two Georgia candidates speaking to the convention, Evans had every reason to anticipate a hostile reception. All the more reason not to give her one. The Netroots event is a blip on the national political calendar, but this was the first story of any significance in the Democrats’ race for the 2018 Georgia gubernatorial nomination, and it won’t help the party’s nominee.

The Evans incident took place within a larger context of Democratic line-drawing, as progressives aimed for a clean break with Clinton-era policies.

“The Democratic Party isn’t going back to the days of welfare reform and the crime bill,” Sen. Elizabeth Warren of Massachusetts told a receptive Netroots audience.

Nor, for that matter, is the Republican Party. Both national parties have found themselves in a strange place where they can find no connection to the middle ground.

Abrams wasn’t there when her rival’s speech was disrupted, but spent a lot of time at the convention pounding the message that her candidacy could generate a legion of so-far unregistered voters to tip the balance in Georgia Democrats’ favor. As the Democrat who has headed the party’s registration effort through the past couple of election cycles, Abrams should be called on to answer why this demographic nirvana, so often prophecized, has not yet materialized.

That is, to answer this question without the words “Brian Kemp.”

Kemp has proved to be more harmful to Georgia Democrats as an excuse than he has as secretary of state. Some of the things he’s done regarding Democratic voter registration efforts seem questionable, but Jason Carter and Michelle Nunn didn’t lose their respective races because of Kemp, and no election shenanigans account for Hillary Clinton’s loss in this state.

As an excuse, Kemp has deflected hard questions about why the party’s relatively well-funded voter registration and turnout efforts have been ineffective. Every election cycle, Georgia gets held up as the “next Virginia.” So far, Bristol seems nowhere in sight, and Richmond a long way down the road for Democrats in this state.

Look at Georgia’s 7th Congressional District, held by Republican Rep. Rob Woodall, heir to the great flat-taxer, John Linder. According to current census data, 32 percent of the residents of that district identify themselves as Latino, Asian or mixed race.

These might be Democrats. There could be a real chance for Democrats to make trouble in what has been a Republican stronghold. But “Trust Black Women” isn’t going to work as a rallying cry for these potential voters, any more than “Trust White Women” would. There has so far been no serious investment by the Democrats in broadening their potential base, for all the newspeak.

While Netroots got all the attention — as much attention as Democrats get these days — there was another interesting story involving party politics last week. Former Vice President Joe Biden recorded a robocall ad for former U.S. Attorney Doug Jones, one of seven Democrats competing in this Tuesday’s U.S. Senate primary in Alabama. Jones, a prosecutor in the 1963 Birmingham church bombing case, has also been endorsed by Rep. John Lewis.

It might only be because they’re friends, or because a former Biden staffer is managing Jones’ campaigns. In any case, the Democratic nominee has less chance of winning the seat vacated by U.S. Attorney General Jess Sessions than either of the Staceys have of becoming governor of Georgia. But these are the kinds of things a politician does when he’s keeping skin in the game.