For Democrats seeking a way back to relevance, it’s down to Idaho 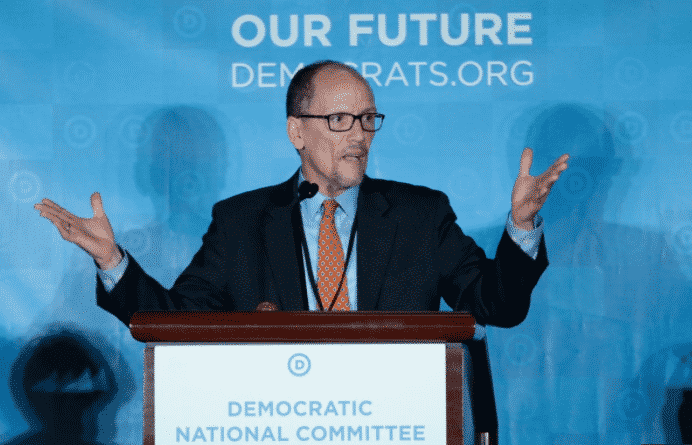 Perez was only a hair away from victory after the first round of voting anyway, but the deciding votes that pushed him over the top came from about as far out in the traditional Democratic solar system as you could get.

The Democratic Party still has union bosses and big cities mayors, and representatives of various interest groups. But the old power centers have been severely shaken. Even if the establishment candidate won Saturday, he needed a few votes from a candidate whose state gave Hillary Clinton only 28 percent of its vote last November, which is a working definition of fringe. This is no longer a party that can take very much for granted.

While the DNC was meeting in Atlanta, there was a small degree of encouragement for Democrats in a special election race which allowed the party to hang on to control of the Delaware Senate.  Joe Biden campaigned for the Democratic candidate, Stephanie Hansen, and the party raised a lot of money for her, so this wasn’t a surprise. But Democrats won by an 18-point margin in a district where they only got a 2-point margin in 2014. Turnout was off the charts.

If that’s a harbinger of some larger Democratic rebound at the grassroots level touched off by the Trump administration’s maiden voyage, it’s good news for Democrats. Enthusiasm can erode very quickly, however, if Democrats don’t have candidates to vote for.

The two major political parties are both complicated national organizations with branches in every state, but at their essence they are also a network of fairly small clubs. They are people who’ve known each other for years, who meet one Saturday morning a month at the local Shoney’s and put up yard signs in front of their homes every election.

Each party’s national convention is a distillation of all these local political clubs. The offhanded dismissal of the national conventions as outdated because they don’t actually choose the candidate anymore misses the point that at some level, a highly personal sense of belonging is key to the party’s survival. Belonging can be reinforced by wearing funny hats and waiting for hours in lines.

No small part of the Republicans’ rising dominance in national politics has been the party’s ability to sustain these grassroots organizations while the decline of union membership and other factors have made this much more difficult for Democrats.

It’s a chicken-and-egg question, whether a party needs the candidate first, or the club. If Democrats have any chance of rebounding, candidates and clubs will have to evolve together.

Perez will attend President Donald Trump’s first address to Congress as the guest of Rep. Keith Ellison, whom he defeated in the chairman’s race Saturday and immediately named the party’s deputy chair.

This display of unity is good for the party, but the Hillary Clinton-Bernie Sanders rift, for which this race was a proxy, isn’t the biggest threat the party faces. Even before Trump, Republicans have digested huge schisms within their party and still ended up in the majority. A certain amount of division might actually do Democrats a lot of good.

It’s not unity but relevance that has to be the new chair’s top priority and that starts with a regeneration of the party at the local level.

Which brings us to the Republicans.

As they take their seats to listen to the president Tuesday night, the Congressional Republicans have all the relevance they can handle, as they face the massive commitments to improve on the Affordable Care Act, reform taxes and pump up the infrastructure which the president presumably will outline in his speech.

As for unity, no matter what kind of whopper the president might tell in his speech, no Republican is likely to stand up and shout “You lie!” as Rep. Joe Wilson did to Barack Obama in 2009. Behind the scenes, however, there is said to be an unease over the way this president has conducted himself, which this speech can make better or worse.

Trump has proved adept at talking past his audience and directly to his voters. But he’ll be needing the crowd he’s addressing in the House chamber Tuesday night.