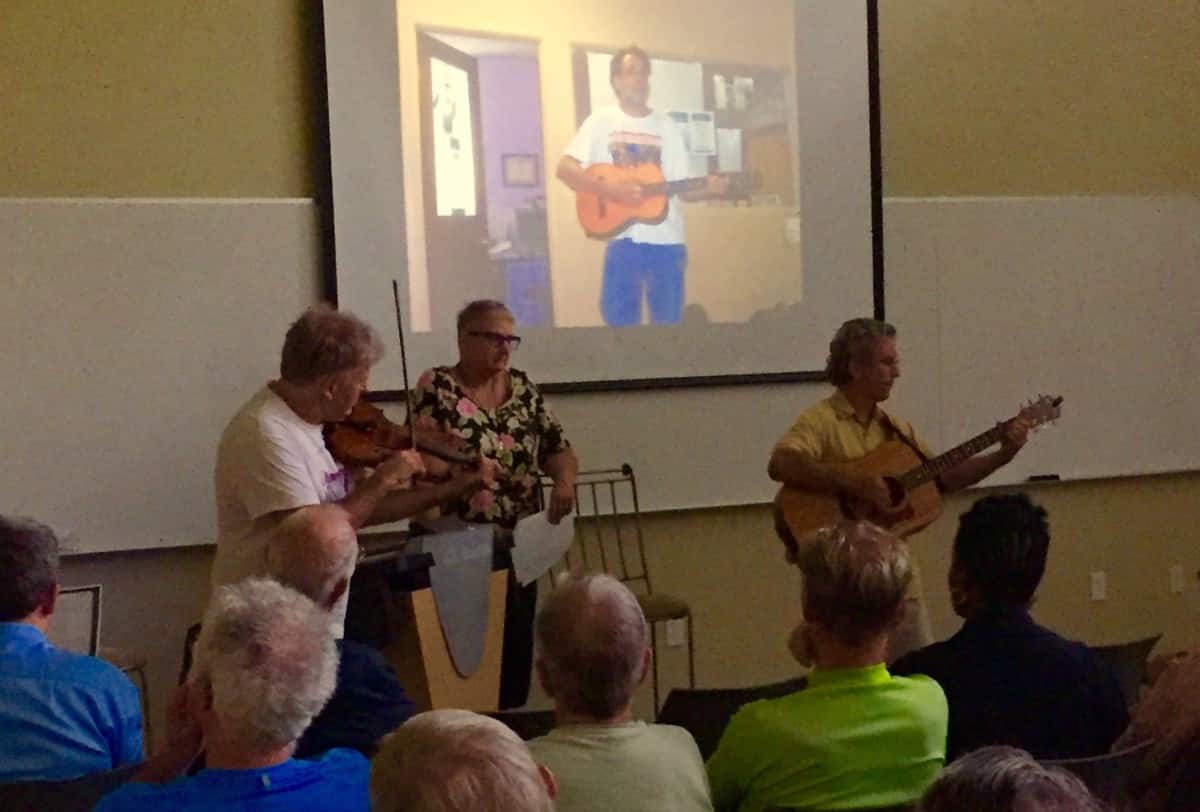 One could measure the impact of Dennis Hoffarth by the dozens of people who showed up at a memorial service for him on Saturday at Atlanta’s Southface.

It had been at least a decade since Hoffarth had lived in Atlanta.

But a resounding theme of people who spoke was how Hoffarth had changed their lives; how he had helped them discover the love of cycling, the benefits of clean energy, the pleasures in simple living and the joy of music. 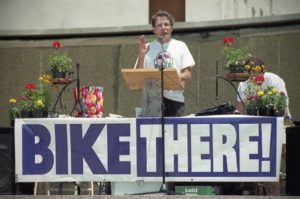 Atlanta Bicycle Campaign’s Dennis Hoffarth rallies the two wheeled troops from the fiery pedal powered pulpit during one of the Bike There! Rallies in Woodruff Park in downtown Atlanta May 15, 1999. (Photo by Chris Hunt Photography)

One friend remembered how Hoffarth’s voicemail message told callers he would be happy to about cycling, recycling and the cycles of life.

Hoffarth, 67, passed away from complications of a brain tumor on July 15 in Missouri, where he lived in a community called Dancing Rabbit.

Dennis Creech, co-founder of Southface who has run the nonprofit for 38 years, described Hoffarth’s role.

“He was at the genesis of the organization and served on the board,” Creech said of “the other Dennis” as both were often called. Before the founding of Southface in 1978, Hoffarth had received a flier in the mail aimed at promoting solar energy. 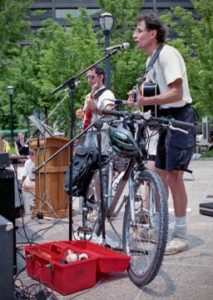 Atlanta Bicycle Campaign’s Dennis Hoffarth (foreground) and Ira Jacobson serenade the crowd of bikers, politicians and fellow advocates gathered for a Bike There! Rally in Woodruff Park in downtown Atlanta on May 9, 1998. (Photo by Chris Hunt Photography)

Earth Day had already taken hold, and now there was a movement to start “Sun” Day – and that’s how the Georgia Sun Day Committee started.

“Here in the South, it did not work,” said Creech, about the religious importance of Sundays.

So Georgia Sun Day became the Georgia Solar Coalition, and later Southface, and Hoffarth served on its board. Creech said Hoffarth was one of the few who understood the relationship between energy and the environment.

Hoffarth was probably best known in Atlanta as the co-founder, president and executive director of the Atlanta Bicycle Campaign.

“Dennis Hoffarth changed my life,” said Rebecca Serna, the ABC’s current executive director, who acknowledged she had not know him that well. But he had built the foundation for the nonprofit organization that is now one of the leading voices for cycling in Georgia.

The Coalition’s website mentioned all the initiatives Hoffarth had started: 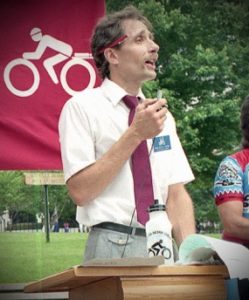 Atlanta Bicycle Campaign’s Dennis Hoffarth addresses the crowds of bikers, advocates and politicians during one of the early Bike To Work Rallies in Woodruff Park in downtown Atlanta, Ga. on May 14, 1992. (Photo by Chris Hunt Photography)

The website went on to say that Hoffarth was the “city’s face of bicycling, going to countless public hearings (by bike), as well as managing day-to-day operations, and making sure ABC had an excellent newsletter.  ABC’s first office was in Dennis’s home on Flora Avenue. It’s impossible to imagine where we would be without his years of patient service.”

Several friends talked about how not only talked the talk, but walked the walk. As a carpenter, he could be seen carrying a ladder or a table saw on his “truck bike.” One he even moved a file cabinet on his bike. His Kirkwood home had a wood stove.

Tommy Lupo said that Hoffarth had shown him that “you could actually live without a car.” And then he recounted Hoffarth’s life philosophy: “I work to eat. I eat to live. I live to bike. I bike to work.”

Tom Coffin’s read about Hoffarth’s commitment to cycling in a newspaper article – quoting one of his sayings that one does not need tons of steel to keep one dry when it’s raining. All one needs is a raincoat.

“He lied,” Coffin said lovingly. Thanks to Hoffarth, Coffin commuted to his job with the City of Atlanta for years, complaining every time it rained that Hoffarth had liked to him, 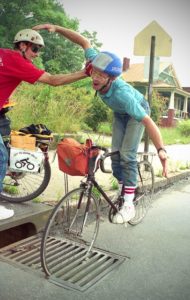 “He profoundly changed my life for the better,” Coffin said.

On a personal note, I shared my memory of going on Sunday morning ABC rides as Dennis would ride at the front before slowing down to help bring up slower riders – acting like a shepherd looking over his flock bicycles. He also was the first one to tell me about “road diets” – removing a lane for automobiles so one could add bicycle lanes on both sides.

Towards the end of the memorial event, Hoffarth’s life partner – Sharon Bagatell – spoke about how important it was to be with so many friends who knew him.

Together, they had helped advance “permaculture principles” – showing how humans could live an environmentally sustainable lifestyle.

“I’m still in a very emotional place,” she said. But she added that he was laid to rest next to an oak tree in the woods at Dancing Rabbit “ecovillage,” and she marked the spot by leaving his bicycle at his final resting place.

Then several friends ended the service by playing music and singing songs as images of Hoffarth flashed on the screen behind them. 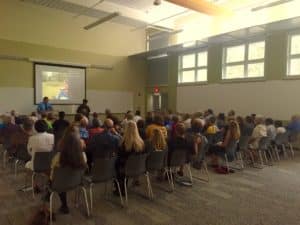 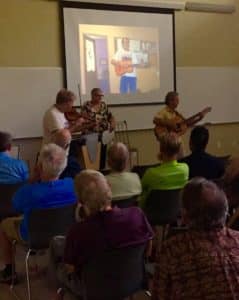 As friends sing songs to honor the spirit of Dennis Hoffarth, he appears to be singing along as his photo flashes in the background (Photo by Kelly Jordan)