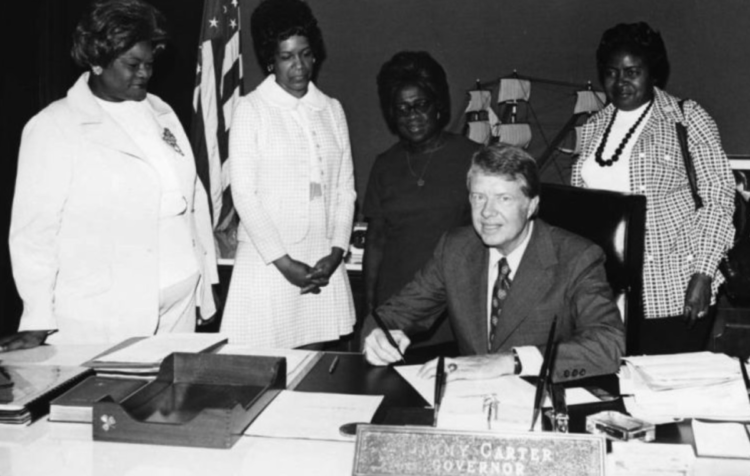 The political organizing being led by Black women in Georgia is not a new phenomenon. Atlanta’s own Dorothy Bolden began organizing for domestic workers and is still regarded as “fearless” in her approach according to her obituary in The Atlanta Journal-Constitution. 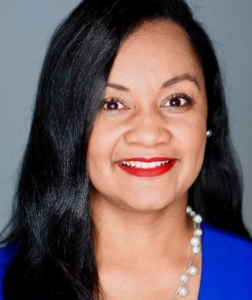 Georgia is the birthplace of the domestic workers’ movement, where nannies, cleaners, and care workers have fought for basic dignity and respect for generations. This is an industry that overwhelmingly includes women and a disproportionate number are women of color. At the height of the Civil Rights movement, to join the National Domestic Workers Union led by Dorothy Lee Bolden, you had to pay $1 and register to vote because she understood the power of the vote.

Bolden, born in Atlanta’s historic Vine City neighborhood, was encouraged to get active in the civil rights movement from her neighbor Martin Luther King, Jr. She was concerned that the views of the common person were not being heard. This led her to launch the National Domestic Workers Union of America in 1968.

During this time period, 13-hour days and pay of only $3.50 were not uncommon for domestic workers. The union that Bolden formed helped to organize household help and the labor laws that actually governed these individuals and their employers.

It all started from women feeling as though they could share their stories with Mrs. Bolden. She became a sounding board for the concerns and challenges that women were feeling. The similarities of their concerns only strengthened the movement. Part of Bolden’s genius was the realization that there is real power in numbers and that as an organized group, changes could be made as she registered more members to vote.

Bolden is quoted as saying, “We aren’t Aunt Jemima women, and I sure to God don’t want people to think we are. We are politically strong and independent.” She is responsible for registering thousands of African Americans to vote during her life and it is fitting that this is still being done today via the policy and advocacy arm of the organization, Care in Action. 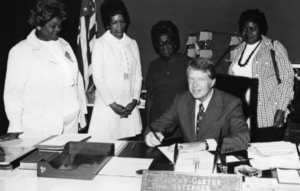 One of Bolden’s more notable initiatives was the funding of MARTA. In part due to Bolden’s efforts, the first referendum to fund MARTA in its’ inception in 1968 was blocked because she was effective in spreading the message that Black people were not included in the planning. Three year later, as Black people were more involved in the planning efforts, she worked equally as hard to influence support for the revised referendum that passed.

As we look at Atlanta’s transportation challenges that still linger today, one cannot help but to reflect on the racially motivated decisions made as MARTA was being formulated in the 1960s. From the counties that MARTA would ultimately touch to the cost of the fare, Bolden was actively organizing and mobilizing around this issue. She knew that low cost options for transportation were key to domestic workers getting to their place of work.

Due to legislation such as the “Maddox Amendment,” which ensured that no more than 50 percent of the sales tax revenue would go to cover operating costs, MARTA has been forced to continuously raise its rates. To date, MARTA is one of the priciest transit systems in the country.

The growing electoral power of Black women and other women of color isn’t a new trend. What is new is that campaigns and election organizers are finally investing in these groups of women. The Stacey Abrams’ campaign for governor in Georgia is evidence of this phenomenon. Women in the state showed up and mobilized their communities like never before, and this includes domestic and care workers. 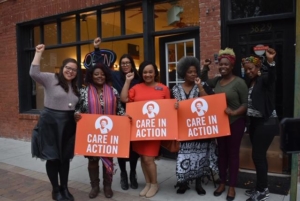 The political organizing in Georgia is the cultivation of political soil long left to fallow. Now, with the proper care and commitment thanks to these women, the ground game of the domestic workers will be a force that has the potential to transform the South. As reported in Politico, Georgia is now a state that is considered a swing state in 2020 and inevitably a great deal of money will be spent in upcoming elections in the state.

Even with Abrams not becoming governor due to the widespread voter suppression efforts, the following can be viewed as a forecast of what to expect as we look at data from Care in Action:

Women of color are highly engaged in the political process and this trend will only increase by 2020. As grassroots organizations like Care in Action continue to take shape in Georgia, issues like transportation, voter rights, and criminal justice will be influenced by individuals who are activating off of the shoulders of legends like Atlanta’s own Dorothy Lee Bolden.

Abrams was the first candidate that Care in Action endorsed, but she will not be the last.

Note to readers: In addition to her role with the National Domestic Workers Alliance, Nikema Williams serves as the Georgia state director of Care in Action, the advocacy and political arm of NDWA. Williams is an alumna of Talladega College, a private liberal arts Historically Black College in Talladega, Ala. and resides in the Vine City neighborhood with her husband, Leslie Small, their 3 year old son, Carter, and two rescue Yorkshire Terriers. They are members of Central United Methodist Church in Atlanta.