The Ivan Allen Jr. Prize in Social Courage was awarded to Dr. Anthony Fauci March 15 at a hybrid virtual event held at the Ferst Center at Georgia Tech with President Ángel Cabrera and Dr. Rochelle Walensky, director of the CDC (Photo by Maria Saporta)

Dr. Anthony Fauci was awarded Georgia Tech’s Ivan Allen Jr. Prize in Social Courage Monday for all the contributions he’s made throughout his career, but especially during the past year as the country faced the COVID-19 pandemic.

Dr. Fauci is one of the nation’s leading infectious disease experts who is now serving as President Joe Biden’s chief medical advisor. He participated in the award ceremony, held at the Ferst Center for the Arts, through a virtual connection.

Georgia Tech President Ángel Cabrera gave Dr. Fauci the award saying he displayed the same character traits of innovation, commitment and courage of the late Mayor Ivan Allen Jr., who would have celebrated 110th birthday on the day of the event.

“We thank you for your steadfast leadership, so that we can have hope for ourselves, our families, our communities and our nation,” President Cabrera said. 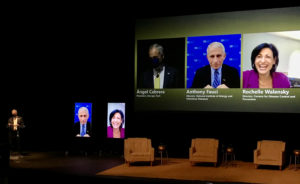 The Ivan Allen Jr. Prize in Social Courage was awarded to Dr. Anthony Fauci March 15 at a hybrid virtual event held at the Ferst Center at Georgia Tech with President Ángel Cabrera and Dr. Rochelle Walensky, director of the CDC (Photo by Maria Saporta)

Dr. Fauci said the country has experienced gut-wrenching events in the past year that “remind us we have much work to do as individuals and as a country to overcome social injustices,” including the health disparities that “most profoundly affect people of color.”

For about 37 years, Dr Fauci has served as director of the National Institute of Allergy and Infectious Diseases.

“In that role, I’ve worked with seven presidential administrations, as well as 1000s of incredibly talented scientists, clinicians, public health officials, and most importantly patients, to preserve, protect and advance the health and the welfare of all Americans and people worldwide,” Dr. Fauci said.

In response to a question, Dr. Fauci said it was important to focus on what he needed to get done rather than feeling worn out or discouraged.

“Often, you can get stressed by things that are beyond your control,” he said referring to his tenure working for President Donald Trump. “This past year, what I’ve gone through, anybody who witnessed it, would have to see it would be quite stressful. I took no great pleasure in having to be in conflict, at times, with the President of the United States. I mean that is not something that I seek to do. It’s just sometimes necessary because you have to stick with the truth and maintain your integrity. That was not an easy thing to do, but I had to do it.”

The prize is named after Atlanta Mayor Allen, who displayed courage in the 1960s when he supported racial integration in the South.

Georgia Tech selected Dr. Fauci for the prize because he was driven by science and not politics. The Ivan Allen Prize, funded in perpetuity through a gift from the Wilbur and Hilda Glenn Foundation, gives each recipient $100,000.

Dr Fauci actually declined the $100,000 part of the prize, so it will be given to a charity that the Ivan Allen Prize committee chooses.

During his remarks, Dr. Fauci lamented how politicized the pandemic has become – whether it be the wearing of masks or getting the vaccine. 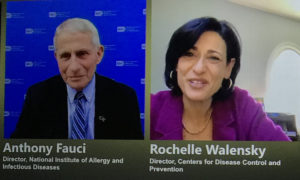 “I have never in my long decades long experience ever seen the level of divisiveness that exists in the country today, where what should be normal, common sense, in some respects no brainer type of public health issues, have taken on a political connotation,” Dr. Fauci said. “That makes a lot of things difficult.”

“We have to strengthen our global health security network, where you have communication, transparency and cooperation among all countries of the world,” he said. “In order to be able to detect outbreaks at the early, early stages, you have to build up the public health systems that we’ve let essentially go to some form of attrition over the decades.”

During the program, Dr. Rochelle Walensky, the new director of the Centers for Disease Control and Prevention, joined Dr. Fauci virtually – describing him as “my mentor, my hero, in truth and my friend.”

In return, Dr. Fauci said Dr. Walensky has emerged as a “superstar” in her role at the CDC.

“She’s at an extraordinary organization. The CDC, over the last few years, has taken some hits,” Dr. Fauci said. “It is a phenomenal organization. We are lucky in this country to have the Centers for Disease Control and Prevention, leading us now, towards the end game of getting out of this pandemic.”

President Cabrera welcomed Dr. Walensky to Atlanta, saying there would need to be an in-person gathering in the near future.

Both Dr. Fauci and Dr. Walensky described a different environment working for the administration of President Joe Biden.

Dr. Walensky said she realizes she has a big job, but she is fortunate to be working with her mentor, Dr. Fauci, who is helping her and the “incredible team” at the CDC.

Dr. Fauci acknowledged the thousands of scientists working for the CDC and the National Institutes of Health to pull the country through the pandemic.

“I feel very privileged to be a small part of that extraordinary team, and including, what Rochelle mentioned, the amazing team we have now, with this administration, the management team that we deal with every single day, literally every single day,” Dr. Fauci said. “It is both a pleasure and an honor to do that. I feel very good about what’s going on.” 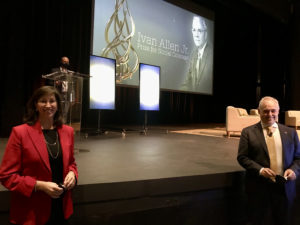 Several dignitaries were present at Monday’s event at the Ferst Center, including Paige Alexander, the current CEO of the Carter Center, and her predecessor, Ambassador Mary Ann Peters.