In a testament to the importance of public health, Georgia Tech will award its prestigious Ivan Allen Jr. Prize for Social Courage to Dr. Anthony S. Fauci, one of the nation’s leading infectious disease experts who is now serving as President Joe Biden’s chief medical advisor.

The 2021 award is being given to Fauci for his steadfast voice of science, facts, and medical best practice during one of the most significant public health challenges in U.S. history.

Georgia Tech’s annual Ivan Allen Jr. Prize honors individuals who have stood up for moral principles at the risk of their careers and livelihoods.

As a trusted face in the fight against COVID-19, Fauci embodies these attributes, according to Georgia Tech’s press release. Fauci faced public criticism and was subjected to enormous pressure in response to his public messages. Despite these challenges, Fauci has continued to deliver his clear and unwavering assessment of the facts and science and provide critical advice to guide the nation and world.

The prize will be awarded virtually to Fauci on March 15, the birthday of the late Atlanta Mayor Ivan Allen Jr. The one-hour award presentation will begin at 3 p.m., and there will be a one-hour panel discussion at 4 p.m. 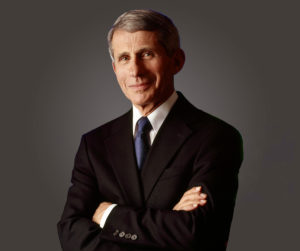 “Dr. Fauci’s resolve in the face of extraordinary threats to our public health here at home and abroad make him the clear choice for Georgia Tech’s Ivan Allen Jr. Prize for Social Courage,” said Ángel Cabrera, Georgia Tech’s president. “As an institution of higher learning committed to bettering the human condition through our motto of Progress and Service, there could be no better person suited to receive this honor than a man who has unflinchingly relied on science and facts in the face of tremendous public and political pressure.”

A noted expert in scientific circles the world over, Fauci became a household name as he sought to deliver to millions of people information about how best to protect each other from the highly transmissible virus that causes COVID-19. Along with other top public health leaders, Fauci pressed Americans to wear masks, avoid crowds, maintain physical distance from people who don’t live with them, and wash their hands often. Fauci also bluntly warned the nation that the pandemic would result in a catastrophic loss of life.

“Amid the crisis, Dr. Fauci’s conscientious leadership continues to provide sound guidance, clarity, and hope to our citizens, our communities, and our institutions as we battle Covid-19,” said Kaye Husbands Fealing, dean of the Ivan Allen College for Liberal Arts. “For his truth, for his exemplary dedication, and his courage, Dr. Fauci is most deserving of this prize.”

As a physician-scientist with the National Institutes of Health, Fauci has served the American public for more than 50 years. He has been a trusted advisor to seven U.S. presidents and is recognized as one of the world’s leading experts on infectious disease. His work in basic and applied research led to preventions, diagnoses, and treatments in the areas of HIV/AIDS and other immunodeficiency diseases, respiratory infections, diarrheal diseases, tuberculosis, and malaria.

Since 1984, Fauci has served as director of the National Institute of Allergy and Infectious Diseases. In 2008, President George W. Bush awarded him the Presidential Medal of Freedom for his work on the U.S. government’s emergency relief plan established to address the global HIV/AIDS epidemic. He still devotes time to his research of HIV infection and the body’s immune responses to the virus.

For most of 2020, he was a member of the White House Coronavirus Task Force established to address the COVID-19 pandemic in the United States. In addition to his role as chief medical advisor, Fauci is now part of the Biden administration’s COVID-19 team.

The Ivan Allen Jr. Prize, founded in 2011, was named for former Atlanta Mayor Ivan Allen Jr., a graduate of Georgia Tech, who at great personal and political risk was the only southern white elected official to testify before Congress in support of the Civil Rights Act of 1964.

The Ivan Allen Jr. Prize for Social Courage is funded in perpetuity by a grant from the Wilbur and Hilda Glenn Family Foundation. It provides a stipend of $100,000 to the awardee or a charitable contribution to a non-profit in honor of the awardee.

Previous Article
Absentee voting laws are really about one party’s identity
Next Article
Hank Aaron the businessman: Another way of remembering the home-run slugger