Four members of an organization that intends to promote climate action in Georgia joined an event Thursday to discuss the importance of communication and helping one another. 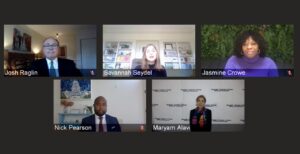 “We’re so excited about the compact,” said Nick Pearson, Google’s global head of energy policy. “This is going to create a lot of collaboration. We don’t know everything, by any means…. We have to have new ways to address climate change.”

The event was billed as the launch of the Drawdown Georgia Business Compact. The program is based at the Ray C. Anderson Center for Sustainable Business, at Georgia Tech.

Crowe responded to a question about Goodr’s commitment to reducing carbon emissions. She said the company has eight waste receptacles and an employee who goes through the waste in the bins and reports on the type of waste in each container via messages sent on the company’s account with Slack Technologies.

“It starts in the house,” Crowe said. “We compost here. We recycle here. We take Styrofoam and recycle it.”

Crowe said the company has worked with food concessionaires at Atlanta’s airport to encourage them to reduce the stream of waste headed to landfills. The city enacted a ban of single-use plastics at city properties including Hartfield-Jackson Atlanta International Airport. It took effect in December 2020.

“We had to do a sustainable food court initiative,” Crowe said. “We got every concessionaire to convert to compostable material. It was hard. It’s more expensive. [We told concessionaires], ‘your ROI [return on investment] may not see it, but the environment sees it.’”

Raglin said Nofolk Southern’s efforts in sustainability include the use of locomotives that emit fewer pollutants than older models. In January 2022, most employees are to move into the new headquarters buildings in Midtown, which he said has a number of sustainability features.

Seydel said she is hopeful the collaboration can lead to a reduction in the state’s carbon emissions.

“No one makes a lock without a key,” she said. “Where better than to start in our own community?”

Looking to the future, Seydel said her company intends to send folks to Austin, Tx. in late January to attend Compost2022. The conference is a large gathering of entities that work in the realm of composting and organics recycling.

“For us as a circular company, it’s important to understand the needs, the obstacles, from field to fork to field,” Seydel said. “We want to learn the needs of the composting community.”

In a session on equity, Crowe said a major challenge she faces is getting to work with Google and Norfolk Southern, which were represented on the panel. Crowe said the company she founded is Black, female owned, 80 percent of employees are women, and is a certified disadvantaged business enterprise.