It was a big day in the decade-long history of the Drew Charter School in East Lake.

First, Comcast used the school as the platform to announce it Internet Essentials program in metro Atlanta — a program designed to help bridge the digital divide for those less fortunate.

And as soon as that was over, a group of dignitaries went to one of the conference rooms at the school for a special announcement.

“We hope we have some good news for you,” Deal told the group. “As part of our ‘Race-to-the-Top, we have available Innovation funds to schools that have shown real promise. We are pleased to announce that the Drew Charter School has been selected as one of the recipients of the Innovation Fund. Over the next three years, you will receive $1 million.”

The room, which included Drew Principal Don Doran, burst out into cheers and applause. 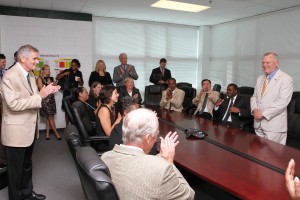 “We know you are doing something really good here,” Deal told the leaders of Drew, adding that this was the first time he had been able to visit the school in person. He especially liked the fact that Drew includes the arts in addition to science, technology and math as an area of expertise.

Drew was selected to receive the grant from the state’s Innovation Fund Committee, which includes former University of Georgia President Chuck Knapp. But because Knapp is one of the leaders of East Lake, he had to excuse himself during the vote for the $1 million for Drew.

Three other schools in Georgia also were to receive $1 million grants in the first round of Innovation funding. Also, one school was going to receive a $50,000 venture grant to help in planning its innovation program.

The other school systems or programs that received grants were: Teach for Georgia; a program between Barrow County and Georgia Tech, the KIPP Teacher Fellows Program and the Regional Charter STEM Academy in White, Hall and Lumpkin counties.

Knapp said that the fund has a total of $20 million available, and that there will be future rounds of grants.

After that announcement, Comcast hosted a lunch at the East Lake YMCA to recognize its employees for giving back to the community.

The highlight of the lunch, however, was Congressman Lewis’ speech on the important role that information technology plays in our world today.

Lewis said he recently heard that the Internet was celebrating its 20th birthday, which put the pace of technological change in context.

“That’s so young,” said Lewis, who was a leader in the Civil Rights movement. “When we launched our first sit-in, we didn’t have a Facebook or twitter or cell phones. But we could change the world — in Atlanta, in Georgia, in my native state of Alabama and Mississippi.”

He then reminded several in the audience, mostly members of a younger generation, how it used to be impossible for blacks and whites to sit next to each other to eat lunch or ride a bus.

“Just to think, that was 50 years ago, the same year that President Barack Obama was born,” Lewis said. “We live in a different America and a changed America. Just think if we had then all what we have today.”

Would the followers of Martin Luther King Jr. been able to reach the “beloved community” sooner had that technology been available, Lewis asked.

Then Lewis said it doesn’t matter how much money we have, whether we’re young or old.

“We all have a right to information,” Lewis said. “Information is powerful.”

Previous Article
When it comes to transit funding, the State of Georgia is missing in action
Next Article
Lead consultant Glenn Totten resigns from metro transportation campaign team