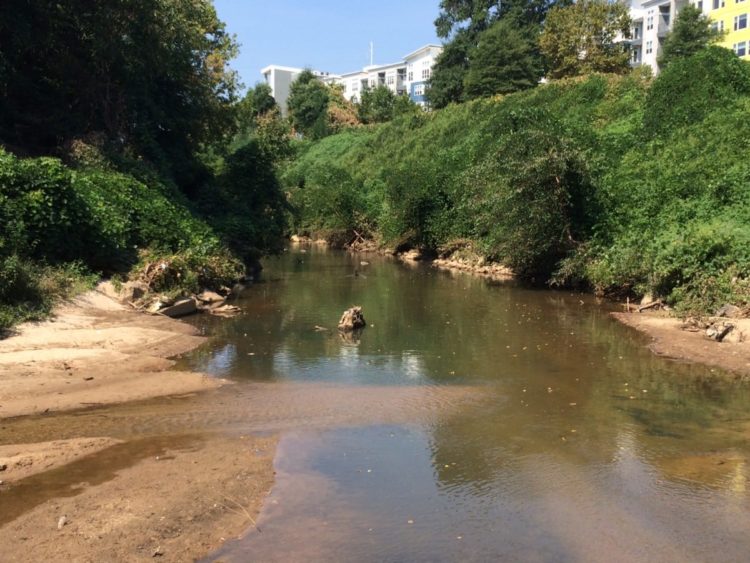 Despite the drought alert issued for metro Atlanta, Peachtree Creek had a fair amount of water Sept. 9 at the confluence of the creek's north and south forks. Credit: David Pendered

Drought has prompted the state to place metro Atlanta in a group of 53 counties where local water utilities are required to inform the public of the need to conserve water. 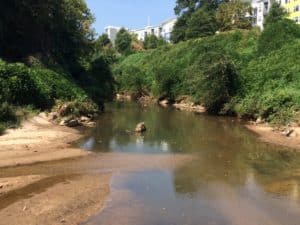 Despite the drought alert issued for metro Atlanta, Peachtree Creek had a measurable amount of water Sept. 9 at the confluence of the creek’s north and south forks. Credit: David Pendered

“North Georgia has had a hot, dry summer and the fall season is historically a dry time of the year,” state Climatologist Bill Murphey said in a statement released by Georgia’s Department of Natural Resources. “Current drought conditions are likely to continue through the fall season, although tropical activity and rain-producing systems can provide beneficial rainfall.”

Almost 69 percent of Georgia’s 10.2 million residents are living in drought conditions, according to figures from the U.S. Drought Monitor and Census. Other portions of the state are so moist that army worms are rampant in pastures, according to a report from the University of Georgia.

“We don’t know how long this drought will last, so we all need to do our part to conserve,” Boyd Austin, chairman of the water planning district said in a statement. Austin serves as the mayor of Dallas. 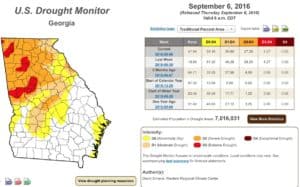 “Thankfully, the Metro Water District’s robust conservation and education programs have significantly reduced water use and have prepared us well to manage our water supplies safely and responsibly through drought periods, now and in the future,” Austin said.

The water planning district has implemented a number measures that it says have reduced water use by more than 10 percent since 2001. That reduction occurred as the region’s population grew by more than 1 million.

Water demand forecasts show that the region will use 25 percent less water in 2050 than was estimated as recently as 2009, according to the planning district’s statement.

Examples of the water-saving measures include: 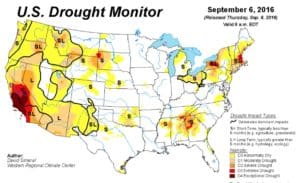 Drought conditions cover a vast region of the southwest, as wells as portions of the upper midwest, southeast and northeast United States. Credit: droughtmonitor.unl.edu

Still, it’s been famine or feast when it comes to rainfall in Georgia.

Some sections of the state have had too much rainfall, according to a Sept. 8 report by Pam Knox, agricultural climatologist with the Department of Crop and Soil Science at the University of Georgia. Knox writes regularly on UGA’s climate blog and website.

Here’s how Knox summed up the situation:

“August’s heat and variable rainfall had a significant impact on agriculture. Army worms became rampant in many pastures. The moist conditions in wet areas led to fungal diseases, which affected peanuts and vegetable crops. Rain hampered the harvest of corn in some locations, while corn in other locations didn’t set kernels because it was too dry.

Peach production continued, although peaches were running smaller than average in size. Some pastures were still not producing hay, forcing livestock producers to sell cattle or purchase hay from out of state, while other areas with rain were seeing a return to better forage conditions and were producing hay again.