Flies alighting on the livestock and pastures so dry that hay’s being fed to cattle are signs of dry conditions in parts of Georgia. But this situation is mild compared to the drought out West and fires devastating parts of Arizona and threatening the famed Boyce Thompson Arboretum and its Wallace Desert Garden. 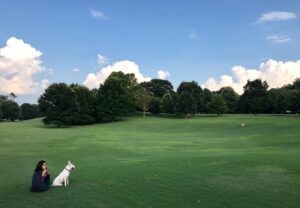 Metro Atlanta has had adequate amounts of rainfall to keep the fields green at Piedmont Park. Credit: Kelly Jordan

Metro Atlanta remains under no level of dry or drought condition.

Crop and weather reports once were comingled, as Americans paid attention to the source of their food. This type of interest may be returning as consumers face supply disruptions, not from weather this week, but from ransomware attacks including one on JBS SA, a Brazil-based beef supplier that halted all cattle slaughtering at its U.S. plants last week in the wake of the attack.

Several Georgia crops are ahead of schedule, according to the latest weekly report from the U.S. Department of Agriculture. Farmers report 89% of the blueberries have been harvested, compared to 78% in the five-year average. The first cutting of hay is 91% complete and 79% of oats are harvested, both ahead of prior averages.

The consumer favorite, peaches, are still on the trees – 30% of the peach crop has been harvested, compared to 36% for the five-year average.

Georgia farmers are beginning to report their need for rain to ease dry conditions in the fields, according to the latest weekly report from the U.S. Department of Agriculture. 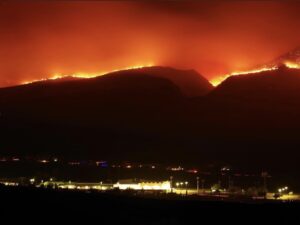 The Telegraph Fire in Arizona threatens areas including the Boyce Thompson Arboretum. More than half of Arizona has been declared under exceptional drought. Credit: Laci Alvarado, twitter.com/AlvaradoAgency/

Georgia is showing signs of abnormal dryness in the southeastern region and the Savannah area, according to the June 10 report from the U.S. Drought Monitor.

The expansion wasn’t enough to spark alarm from Pam Knox in her review of the Drought Monitor report on her climate blog at the University of Georgia. Knox focused her attention mainly on the easing of severe drought conditions in North Carolina.

The farmers provide the USDA with status reports and snippets of their reports are provided in the weekly report, issued by state. This week’s report on Georgia observes: 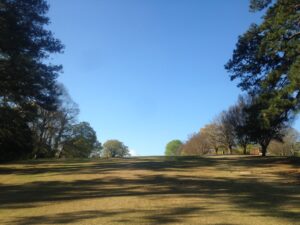 The fairways on the golf course in Candler Park appear to be receiving adequate rainfall. Credit: Kelly Jordan

Out West, 80% of the region has been declared as extreme or exceptional drought.

The area of exceptional drought covers portions of California, the San Francisco Bay area and the Inland Empire; along with parts of Nevada, Utah, Arizona and New Mexico.

The latest map of active fires, posted by the USDA Forest Service, shows a number of fires in this region, including the Telegraph Fire that threatens the Boyce Thompson Arboretum.

The fire has burnt 76,260 acres in Pinal County and officials predict it will be contained June 20. The fire is of an undetermined cause and is 38% contained.

Conditions have improved around the arboretum, as its staff or supporters related in a series of tweets starting June 6, when the fire appeared ready to spread into the facility. 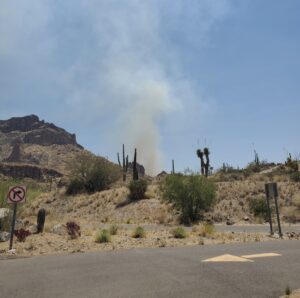 Smoke across the hilltop shows the proximity of the Telegraph Fire to the Boyce Thompson Arboretum. Credit: twitter.com/BoyceThompson 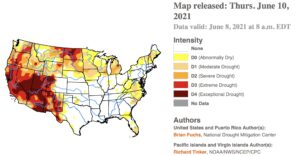 Much of the West is in extreme or exceptional drought, and dry conditions are forecast to spread into the Plains in coming weeks. Credit: droughtmonitor.unl.edu