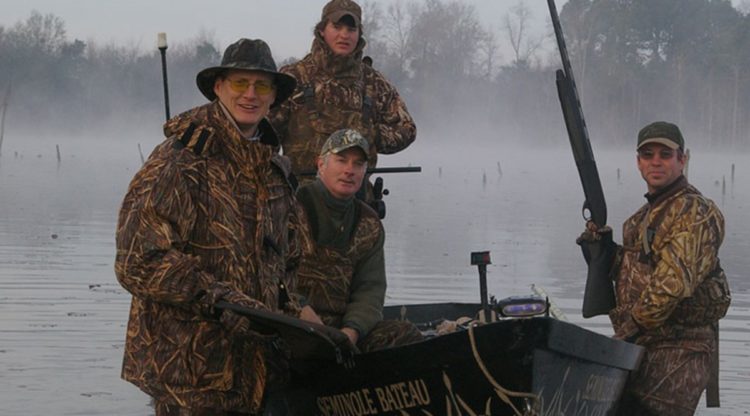 Duck hunting is a big industry in Georgia. At the Pine Hill Plantation, southwest of Bainbridge, a 45-minute duck hunt can be added at a minimum of $700 for a group of four, who have paid a total of $6,600 a day to hunt quail. Credit: pinehillplantation.com 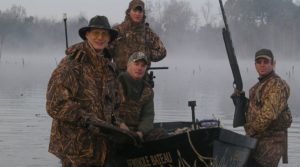 Duck hunting is a big industry in Georgia. At the Pine Hill Plantation, southwest of Bainbridge, a 45-minute duck hunt can be added at a minimum of $700 for a group of four, who have paid a total of $6,600 a day to hunt quail. Credit: pinehillplantation.com

The good news for bird hunters came Nov. 17 from the Georgia Department of Natural Resources.

“Duck and goose hunters should have no problems this year finding hunting spots that have water and provide habitat for migratory ducks and geese,” Greg Balkcom, a state waterfowl biologist said in a statement.

That’s because the wetlands and ponds that attract ducks were filled with rainfall earlier this year.

“Last year many of the managed wetlands that provide habitat for migrating and wintering waterfowl on state-operated Wildlife Management Areas were dry,” Balkcom said. “But this year conditions are much better due to summer rains and fall hurricanes. [State]-managed impoundments are flooded or near full, with good food production.”

Meanwhile, the lack of rain across the state prompted federal forecasters to display a drought map on their YouTube video, the first time that map has appeared in some time.

“It looks like this graphic is going to become a mainstay,” Todd Hamill, a service coordination hydrologist with the National Weather Service’s Southeast River Forecast Center said on camera. 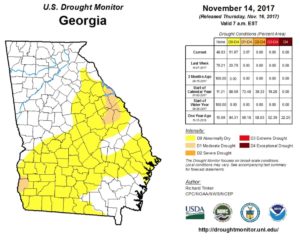 That’s because recent rainfall has been below normal, Hamill said.

“Much of the Southeast is below normal for this time of year,” Hamill said. “Drought is starting to creep into the area. Rainfall in the top of the Savannah basin hasn’t been as helpful as we’d have liked, to build the reservoirs, because of the timinig of the rainfall. Hopefully, in December and January we might see improvement.”

Chris Schaffer, a senior hydrometerologist and Hamill’s partner on the video, observed that the prediction isn’t for a total lack of rainfall. Rather, the forecast is that chances for above-average rainfall have diminished.

Schaffer said the rainy season in the Southeast is from December through March, and that’s when reservoirs and other water bodies get most of the water necessary to be refilled to normal pool levels.

At Lake Lanier, the water level Monday afternoon was reported at 1,065.62 feet above sea level. That’s 5.38 below the full pool of 1,071. The lake is about 4.5 feet higher than at this time last year, and 6 feet lower than at this time in 2015, according to a report by lanier.uslakes.info.

Lake Lanier is a bellwether for water levels in North Georgia. 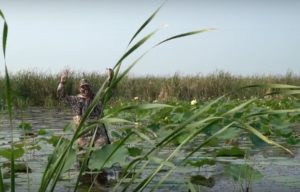 The U.S. Drought Monitor also is warning of abnormally dry weather patterns across the Southeast. From a report released Nov. 14, the latest available, the monitor reports:

Previous Article
It’s all in how you deliver the message
Next Article
From the Great War to the Greatest Generation: Georgia schools and the home front