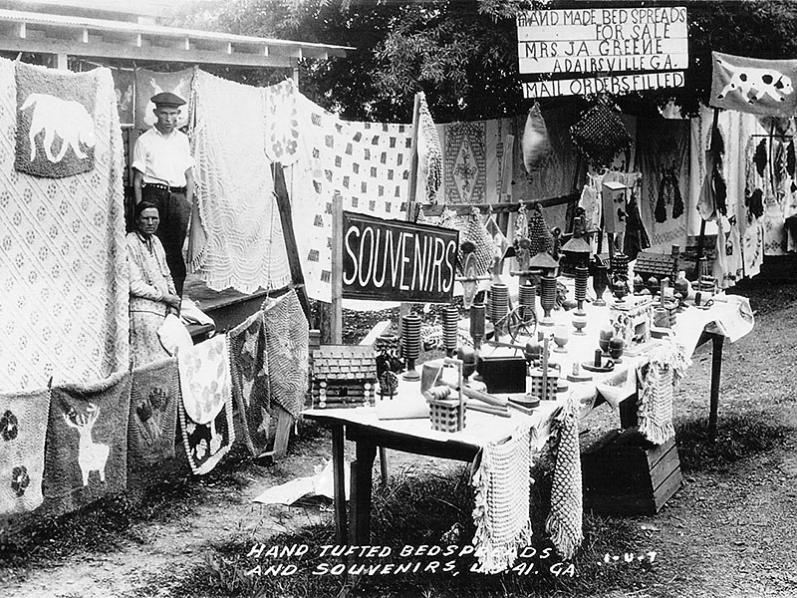 This week, GEORGIA HUMANITIES introduces Seeing Georgia: Changing Visions of Tourism in Modern Georgia, a digital exhibition that explores the development of tourism in Georgia. 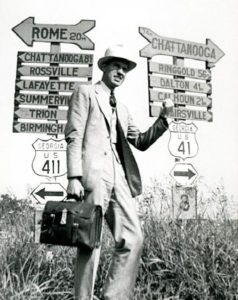 A hitchhiker stands between road signs for U.S. highways 411 and 41, circa 1945. Courtesy of Edwin L. Jackson

With attractions like the Georgia Aquarium, the Savannah Book Festival, and museums and preserved historic properties located across the state, it should come as little surprise that tourism is one of Georgia’s top industries. Seeing Georgia: Changing Visions of Tourism in Modern Georgia, a digital exhibition developed in 2015 by the Richard B. Russell Library for Political Research and Studies at the University of Georgia, explores how Georgia’s tourism industry developed and transformed the state from a stop along the route to Florida to a place worth visiting in itself.

While Georgia’s farmers battled the dirt roads they traveled to market as a matter of course, the early 20th-century advent of northern travelers making their way south to Florida prompted a movement to improve Georgia’s roads for tourism’s sake. From a desire to improve roads came a campaign for tourist highways. One result was the Dixie Highway. This north-south road system provided motorists easy passage from Canada to Florida. In 1926 the “Dixie Highway” ceased to exist as such when road names turned to numbers. Old Dixie Highway signs still exist, though, particularly along old U.S. Highway 41. 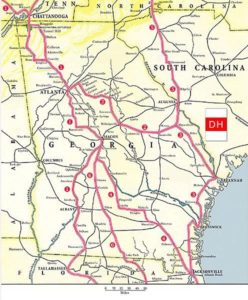 Local entrepreneurs took advantage of improved roadways, and opened restaurants, stores, and hotels along the highways. In the 1930s, north Georgia artisans sold tufted bedspreads, displayed on clotheslines along the side of the road to attract passing motorists. Travelers also stopped for pecans. The success of the Stuckey family’s pecan candy business in the 1930s promoted the opening of the eponymous chain. More than 70 years later, Stuckey’s continues to meet the needs of tourists with food, gas, and sundries.

In 1956 President Dwight D. Eisenhower signed the National Interstate and Defense Highways Act, which paved the way (pun intended) for 41,100 miles of new roads. The new interstate highways permanently changed the way Americans would travel the country: they featured a uniform design and boasted wide lanes (at least two in each direction) and paved shoulders, thanks to Marietta-native Lucius D. Clay, who, after organizing the Berlin Airlift (1948-49), served as the principal architect of America’s interstate highway system. Today, Georgia has 1,253 miles of interstate highways and boasts two of the nation’s seven most important north-south highways: I-95 and I-75. 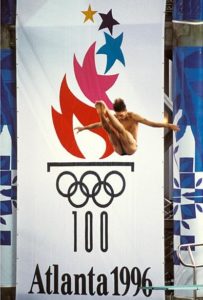 Improved roads helped tourists flow through Georgia more easily. Having seen the economic impact of those tourists’ stops along the way to their destination, the state sought to capitalize on this budding industry by making it official. During the administration of governor Ernest Vandiver Jr., the state created a Tourist Division, which operated under the Department of Commerce. Visitors were encouraged to “Stay and See Georgia” instead of just pass through. In addition to its advertising campaigns, the Tourist Division literally took its message directly to the people through welcome centers, the first of which opened in Sylvania, in east central Georgia, in 1962.

Georgia’s promotion of its many fine attractions worked. In September 1990 the state received the ultimate accolade when Atlanta was selected to host the 1996 Centennial Summer Olympic Games. Between 1990 and the start of the games, nearly 7,500 hotel rooms were added in the Atlanta area. The opening ceremony drew a crowd of 83,000 to downtown Atlanta, but the games spread beyond city limits as locations as varied as Lake Lanier, Jonesboro, Conyers, and even Savannah were enlisted as event venues.

As we celebrate the 20th anniversary of the Centennial Olympic Games, let’s not forget the other boons of tourism: economic investment, interstate highways, world-class museums, and a city whose name is known across the globe.