Earth Day and the BP Gulf of Mexico oil spill. This week’s recognition of these events occurs as polar opposite human interventions are unfolding around Florida’s Apalachicola Bay. 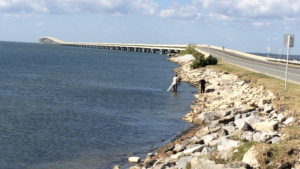 A man and woman wade along the Apalachicola Bay, casting a net for mullet, an oily fish not seen on menus of many seafood restaurants. Credit: David Pendered

To be sure, the bay is just one of many examples of the tug of war in the Southeast between environmental advocates and those pursuing other goals. Attention is heightened during the 11th anniversary of the oil spill, Tuesday, and Earth Day on Thursday.

One example is the proposed sand mine on the edge of the Okefenokee Swamp, in southeast Georgia. Another is the ongoing spill of raw sewage into the South River from DeKalb County’s sewage system, cited last week as a case of environmental injustice by American Rivers on its list of the nation’s 10 most endangered rivers. A third is a proposed rock quarry in Carroll County, along a stream that feeds the Chattahoochee River.

Apalachicola Bay stands out this year for a number of reasons that illustrate the competing views of natural resources. And it’s not just the U.S. Supreme Court ruling April 1 that, as expected, said Georgia doesn’t have to release more water flow into the main tributary of Apalachicola Bay in an effort to restore the bay’s fishery. 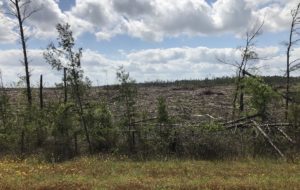 Now that Hurricane Michael (October 2018) has mowed down pine trees in Liberty County, Fl., eliminating many remaining silviculture jobs, county leaders have endorsed a proposal to create jobs by developing a mine to harvest fossilized oyster shells that could be placed in Apalachicola Bay to promote the growth of oysters. Credit: David Pendered

One big new initiative related to the bay that’s gaining ground has received almost zero news coverage – a proposed quarry to mine fossilized oyster shell from Tate’s Hell State Forest. The idea is to dig up the calcified remains of shells and dump it into Apalachicola Bay to create oyster reefs, on which oysters can reproduce.

Carabelle, Fl. businessman Chris Langston and his father have been promoting the mine at least four years, according to a 2017 news report attributed to The Apalachicola Times and posted by the non-profit oursantaferiver.org.

On April 6, the latest version of the plan received a green light from the Board of Commissioners in Franklin County, the home of the bay. Chris Langston told commissioners that other counties have endorsed the proposal. He said he plans to present the plan to Bay County, home of Panama City Beach, a vacation spot for some in metro Atlanta.

The current proposal involves a land swap between Tate’s Hell State Forest and Liberty County. Liberty County is responding favorably to the promise of jobs at a quarry in a county where both humans and jobs are scarce. The Census reports the population density was 10 persons per square mile in 2010. In 2019, Census estimates showed 35% of all residents aged 16 years and older had jobs, the average commute to work was 29 minutes, and household income was $38,015. 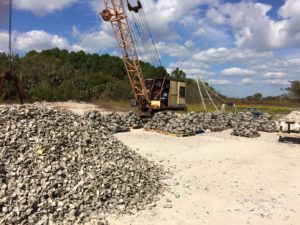 A traditional method of promoting the growth of oysters is to assemble piles of oyster shells into wire containers and sink them, with hopes that oyster larvae will attach and grow into oysters. This operation was in Apalachicola, along Scipio Creek. Credit: David Pendered

The mine would be dug in Liberty County on land that’s now part of a 202,437-acre tract the state assembled from owners of pine timber farms. The state began buying land in 1994 to curb runoff into Apalachicola Bay from timberland. The quality of water flowing into the bay had been affected by roads and drainage ditches, and by phosphorus and nitrogen applied as fertilizer, according to a report by Florida’s Department of Agriculture.

Chris Langston told commissioners that once the Liberty County owns the land, it can authorize a mining operation on land where it might now be banned. The state has final say over the proposed land swap.

Meantime, an ongoing $8 million scientific study by Florida State University, funded through BP’s civil penalties, is investigating measures that could restore water quality in the bay and, with that, the oystery and fishery that’s a major source of jobs in and around the bay.

At the April 6 board meeting, Franklin County Commissioner Bert Boltd spoke up to remind the commission that just three weeks earlier it had heard a presentation on the scientific study from Sandra Brooke. Boltd urged commissioners to give consideration to the ongoing scientific study: 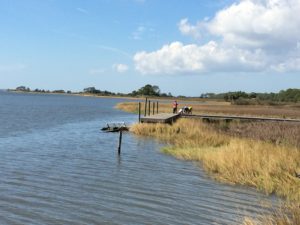 Children gather at the end of a dock that extends over grasslands into Apalachicola Bay. The state has banned the harvesting of oysters in the bay in hopes the number of oysters will recover. Credit: David Pendered

Brooke, with a doctorate in oceanography, is the lead researcher on FSU’s spill-funded project. The goal is to devise a recovery plan for the bay and its fishery. Brooke spoke for about 25 minutes and said the research, at this moment, supports raising the height of some existing oyster beds and sewing them with oyster spat, the name of oyster larvae that have attached to a surface and eventually may grow into oysters.

Brooke did not mention the type of material that could be used to elevate oyster beds. Nor did she mention if a suitable material could be mined from land where runoff from the operation could find its way into groundwater, and affect drinking wells, or possibly into the bay. She did mention jobs.

“We want to bring the bay back, bring people back to work,” Brooke said.

“There are oysters out there and we are seeing spat,” Brooke said. “It’s encouraging.”

Previous Article
Celebrating the impact volunteers have on nonprofits in our region
Next Article
As region becomes more diverse, Atlanta Regional Commission trying to catch up